The bond yields dropped despite surging inflation. It’s not a usual thing on the market, so we have to ask: what does it mean for gold?

The markets hide many mysteries. One of them is the recent slide in the long-term bond yields. As the chart below shows, both the nominal interest rates and the real interest rates have been in a downside trend since March (with a short-lived rebound in June). Indeed, the 10-year Treasury yield reached almost 1.75% at the end of March, and by July it decreased to about 1.25%, while the inflation-adjusted yield dropped from -0.63% to about -1%. 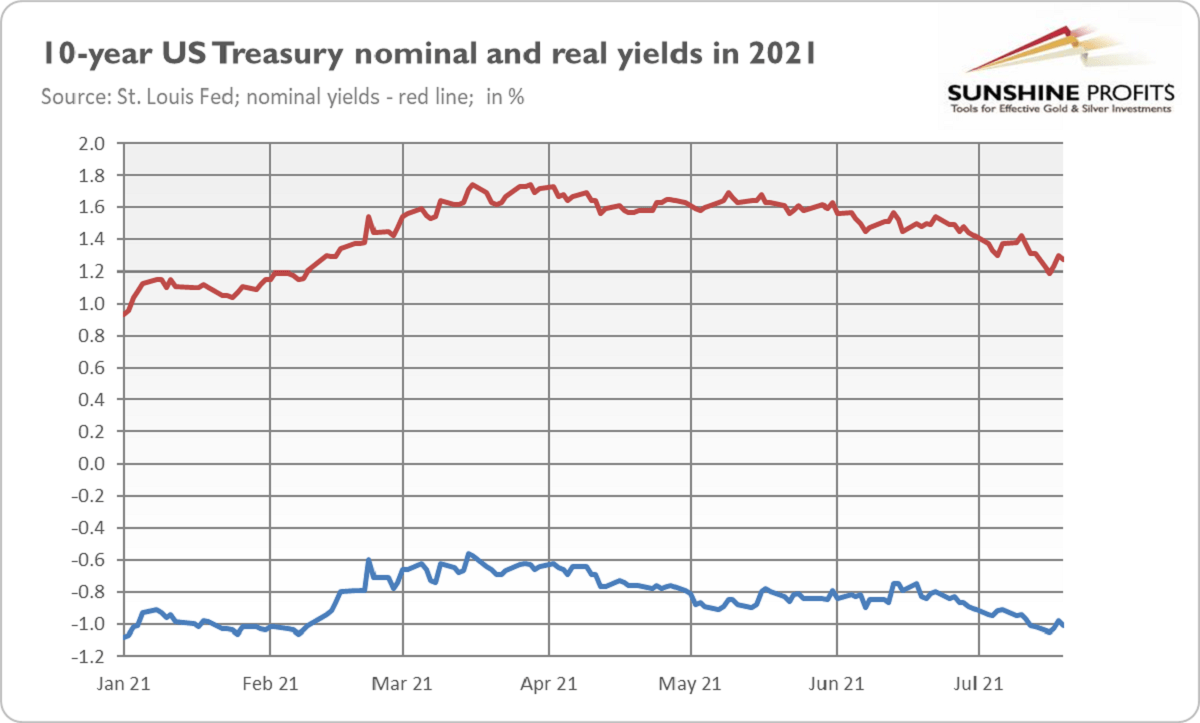 What’s intriguing, this drop happened despite the surge in inflation. As you can see in the chart below, the seasonally adjusted annual CPI inflation rate surged to 5.3% in June, the highest level since the Great Recession. Even as inflation soared, the bond yields declined. 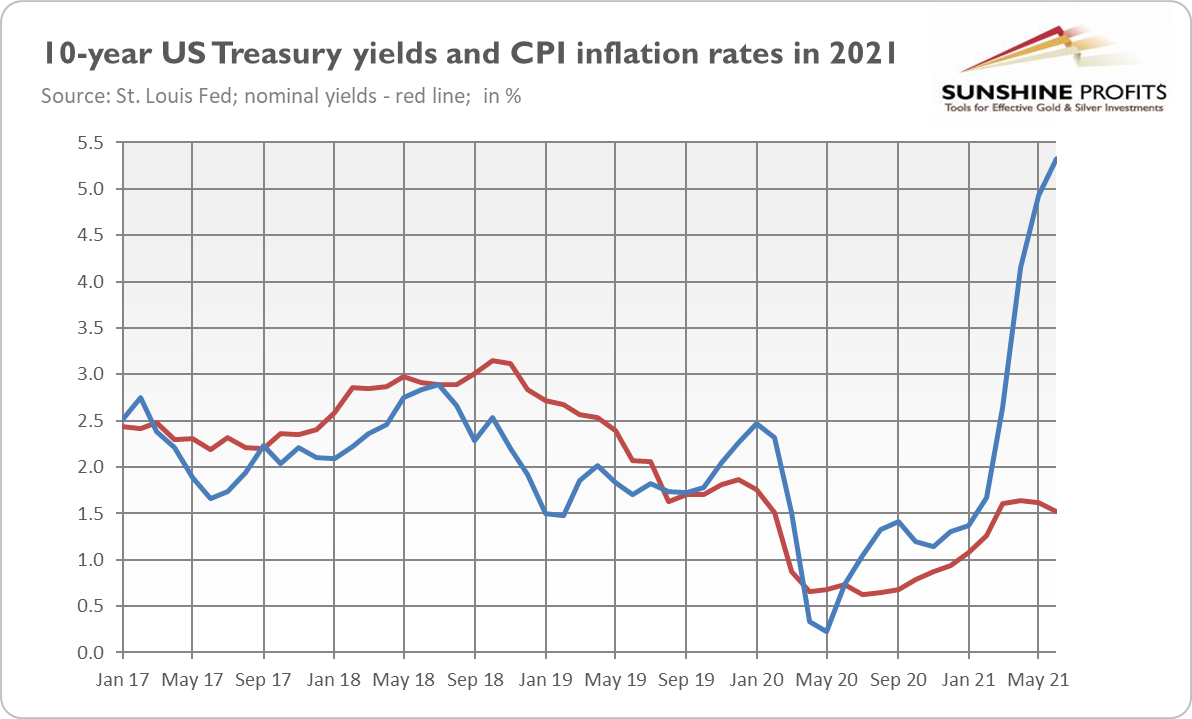 Why is that? Are bond traders blind? Don’t they see that the real interest rates are deeply negative? Indeed, the TIPS yields are the lowest in the history of the series (which began in 2003), while the difference between the nominal 10-year Treasury yields and the CPI annual rates is the lowest since June 1980, as the chart below shows. 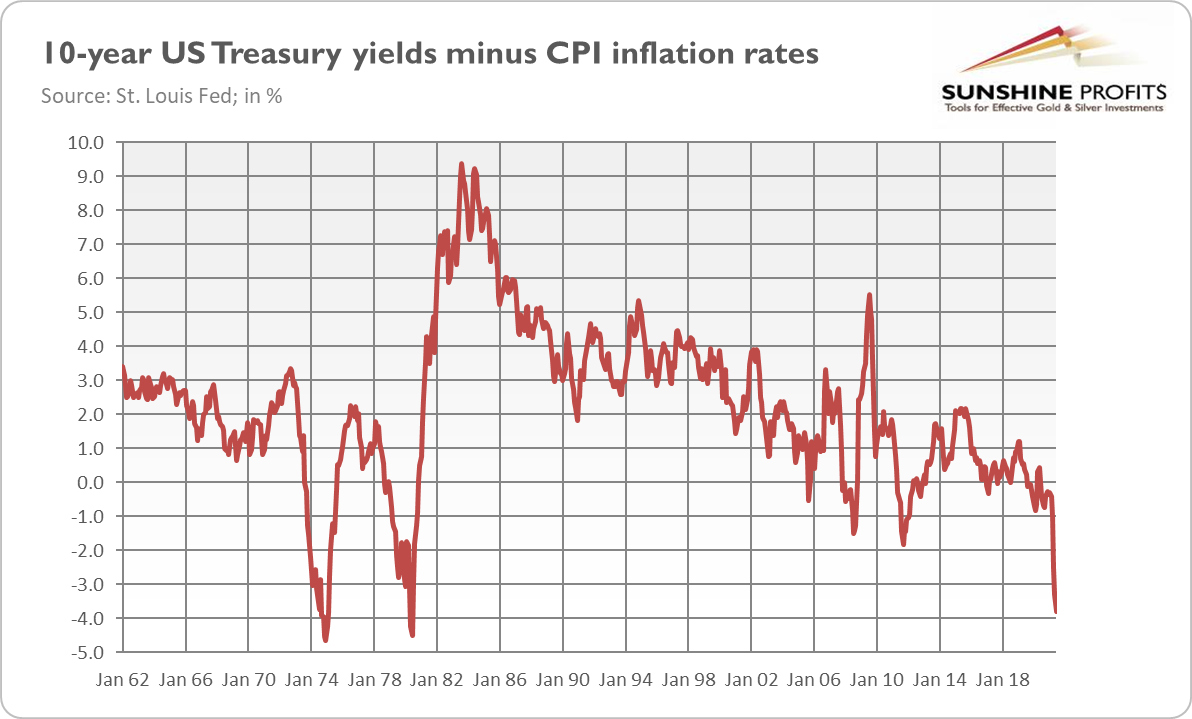 The pundits say that the decline in the bond yields suggests that inflation will only be temporary and there is nothing to worry about. This is what the central bankers repeat and what investors believe. However, history teaches us that the bond market often lags behind inflation, allowing the real interest rates to plunge. This happened, for example, in the 1970s (see the chart above), when the bond market was clearly surprised by stagflation.

Another issue here is that the central banks heavily influence the bond markets through manipulation of interest rates and quantitative easing, preventing them from properly reacting to inflation. Actually, some analysts say that the bond market is the most manipulated market in the world. So, it doesn’t have to predict inflation properly.

What does the divergence between the bond yields and inflation imply for gold? Well, as an economist, I’m tempted to say “it depends”. You see, if inflation is really temporary, it will start declining later this year, making the real interest rates rise. In that case, gold would suffer (unless inflation decreases together with the pace of economic growth).

It might also be the case that the divergence will narrow as a result of the increase in the nominal interest rates. Such a move would boost the real interest rates and create downward pressure on gold.

However, if inflation turns out to be more persistent than expected, investors will fear an inflation tail risk, and they will be more eager to buy gold as an inflation hedge. As I’ve explained, the decline in the bond yields doesn’t have to mean low inflation expectations. It may also indicate expectations of slower economic growth. Combined with high inflation, it would imply stagflation, a pleasant environment for gold.

Another bullish argument for gold is the observation that the price of gold has recently lagged the drop in the real interest rates, as the chart below shows. So, it might be somewhat undervalued from the fundamental point of view. 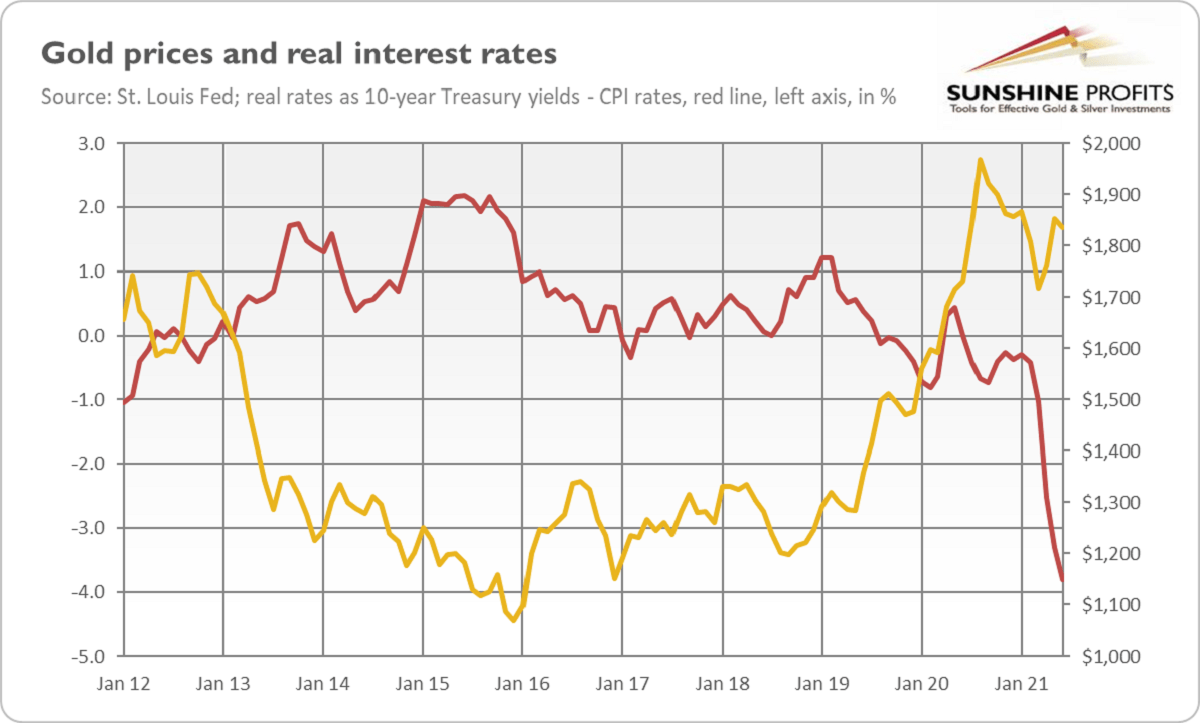 However, given the upcoming Fed’s tightening cycle and the record low level of real interest rates, I would bet that the above-mentioned rates will increase later this year, which should send gold prices lower. But if they rise too much, it could make the markets worry about excessive indebtedness and release some recessionary forces. Then, the current reflation could transform into stagflation, making gold shine. So, gold could decline before it rallies again.