Financial security is important to so many Americans but perhaps never more than during the last year. Over the course of the pandemic, people’s lives have been turned upside down in many ways, including financially – with a lot of people losing their jobs, needing loans, or accruing back rent, and the like.

With many taking on new debt and finding themselves in difficult financial positions, Medical Alert Buyers Guide wanted to get an understanding of people’s financial security before and during the pandemic to figure out what has changed and what hasn’t. They recently conducted a survey to get a sense of just that, and the results showed a pretty varied response – much of it surprising.

Financial Security Of Americans: Then vs Now

Of course, questions have loomed about the impact of unemployment and furloughs over the course of the pandemic – as they relate directly to people’s financial security. An astonishing 59% of people who were either furloughed or laid off during the pandemic said that their debt increased over that time. Only 19.7% said that theirs decreased, and 21.3% said theirs stayed the same. Among those not laid off or furloughed, 48.1% said their debt remained the same.

Stimulus checks, for so many people, were sent throughout the pandemic as a way to help people get on their feet and get bills paid following layoffs and furloughs. For others, though, they were seen as a way to potentially help stimulate the economy. Though a majority spent theirs when the first check went out in mid-2020, it seems that many either saved it or paid off debt with those funds. That begs the question: How did people’s spending habits change in 2020?

The Medical Alert Buyers Guide study showed that the majority of people in their 30s were more likely to have less debt at the start of the pandemic, compared to people in their 20s and 40s. And the ability to spend less money was overwhelmingly the reason that it seems people managed to lower their debt over the course of the pandemic.

Interestingly, 45% of respondents who were laid off or furloughed said they were more likely to use their stimulus check for lowering debt, compared to 40% who didn’t get furloughed or laid off.

Making less money than before the pandemic was also a major factor in debt accruing, with 39.4% of respondents overall saying this factored heavily into the reason for their debt. Almost a third of those surveyed said they felt that their spending increased during the pandemic, causing debt, and 30.3% pointed to making minimum payments on their existing debt as a major reason behind the struggle.

How did the pandemic impact people’s aspirations and plans to reduce debt in the new year? As it turns out, 41% said it had a negative impact. For 31%, though, it actually helped them in their plan to lower debt in the new year. Broken down by race/ethnicity, these numbers get really eye-opening.

Overall, other plans like buying a home or car, going to college, having children, and getting married were impacted by the pandemic from a financial standpoint as well. Roughly 22% of respondents said the pandemic hurt their plans to buy a car, while 21.8% said their plans to buy a house were impacted. Thankfully, when it came to things like getting married and having children, the numbers were much lower – only 12.1% of respondents said they felt the pandemic negatively impacted their marriage arrangements, and 11.2% said their plans to have kids were hurt.

There does seem to be an end in sight for this pandemic, which has upended the lives of so many people. With vaccines rolling out, cases slowly but surely dropping, and stimulus checks helping people stay afloat, things seem to be very gradually getting better. For many of those surveyed, the future of their financial health seems bright as well.

Whatever the strategy, there’s no doubt that 2020 was a difficult financial year for many. The survey showed just a glimpse into people’s financial health during this time, and although many felt the impact, it certainly seems that there are brighter days ahead. 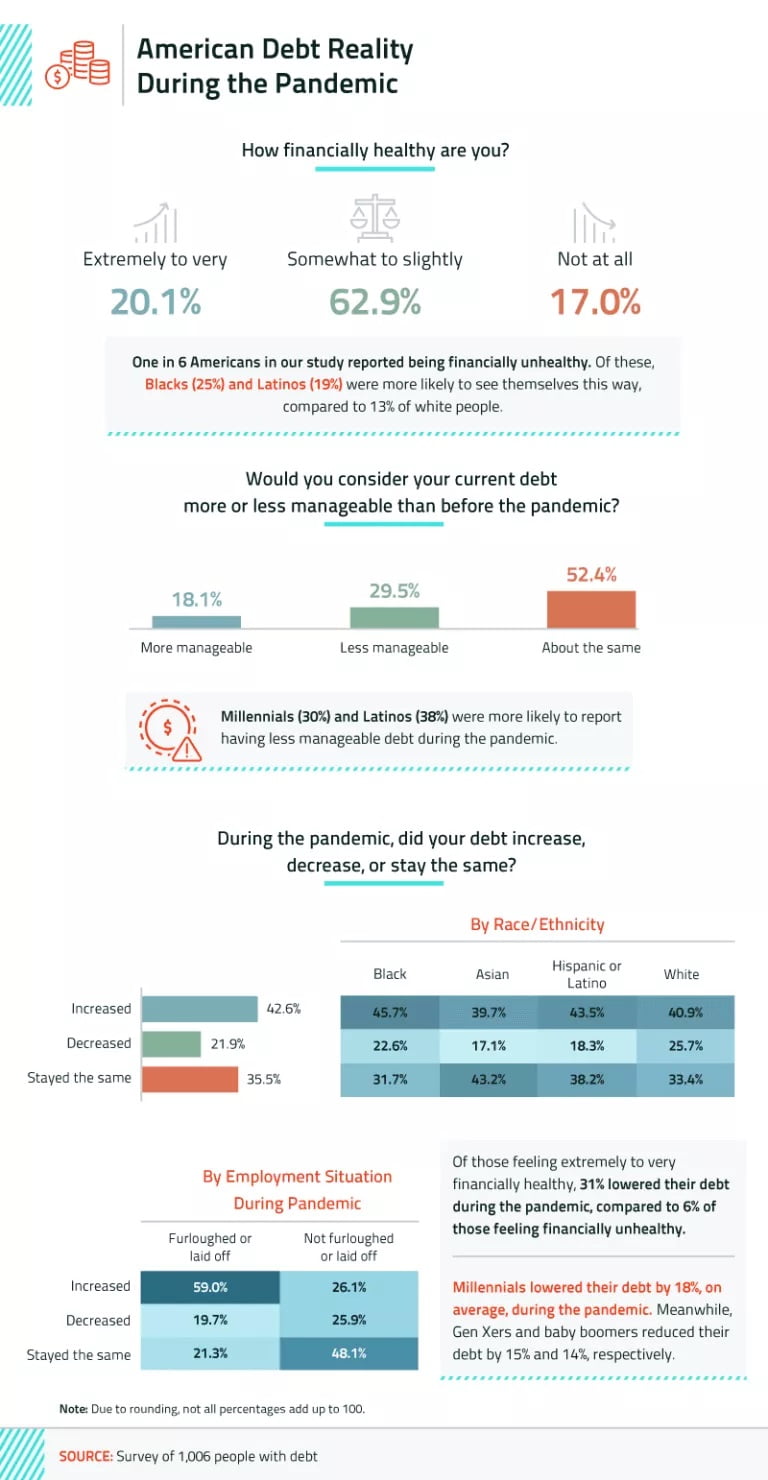 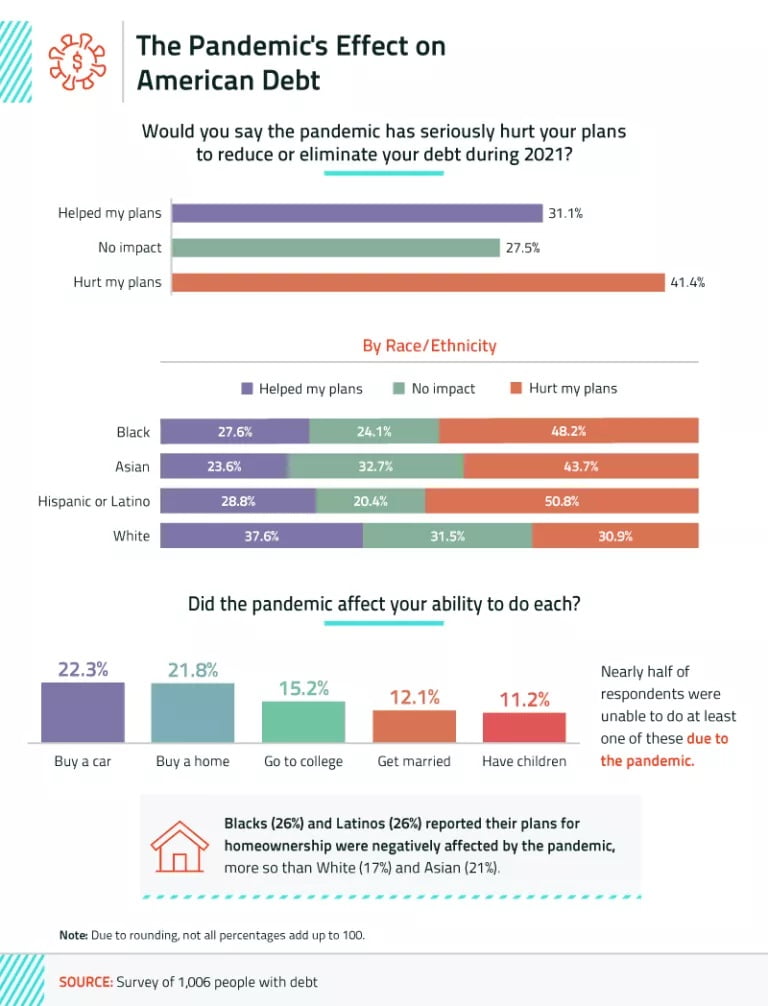 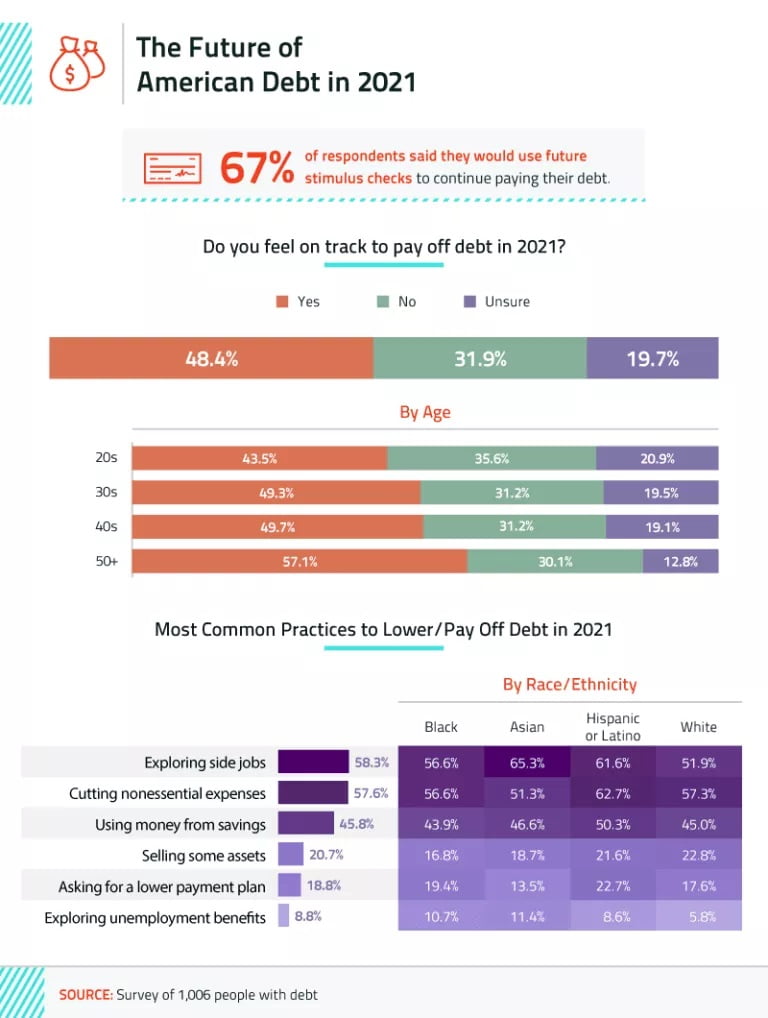