Altria Group Inc (NYSE:MO), through its subsidiaries, manufactures and sells cigarettes, smokeless products, and wine in the United States. It offers cigarettes primarily under the Marlboro brand; cigars principally under the Black & Mild brand; and moist smokeless tobacco products under the Copenhagen, Skoal, Red Seal, and Husky brands. The company also produces and sells varietal and blended table wines, and sparkling wines.

The company delivered another smoking hot dividend increase to shareholders yesterday, by increasing its quarterly dividend by 4.70% to 90 cents/share. This marked the 52nd year of consecutive annual dividend increases for this dividend king. The new annualized dividend rate is $3.60 per share, representing a yield of 7.38% based on Altria’s closing stock price of $48.75 on August 26, 2021. The raise is also better than the 2.40% raise received last year.

I liked the following passage from the press release:

Today’s dividend increase reflects Altria’s intention to return a large amount of cash to shareholders in the form of dividends and is consistent with Altria’s long-term objective of a dividend payout ratio target of approximately 80% of its adjusted diluted earnings per share. This increase marks the 56th dividend increase in the past 52 years.

To me it shows a dedication to paying a dividend, but keeping the payout ratio around 80%. Altria may still do some buybacks, as it focuses on its core business. 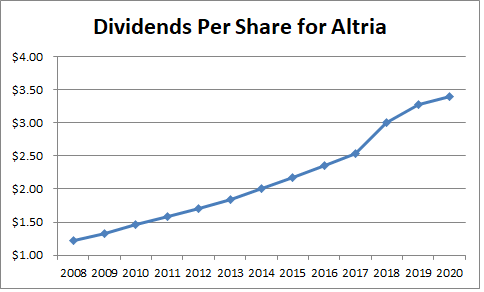 The Stock Has Almost Doubled In Price

The fascinating part for me is that the stock sold for around $26/share a decade ago. Over the past decade, Altria has distributed close to $26/share in dividends alone to those shareholders who held on. In addition, that stock has almost doubled in price (and at the highs in 2017 it had tripled in price, albeit the stock was expensive). Someone who bought a decade ago has an yield on cost of 13.84%.

The first time I mentioned Altria in 2009, it sold for about $15/share. Someone who invested back then would be earning and yield on cost of 24%. In other words, they would be getting their original cost back in dividends alone every 4 years, while also fully participating in any stock upside. 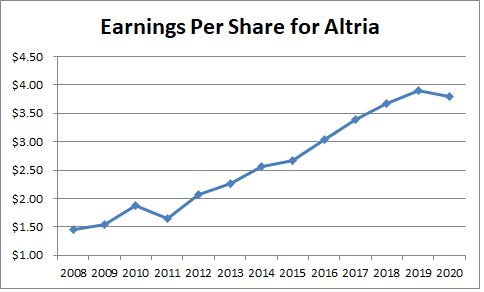 On a side note, the earnings per share for 2016 and 2017 and 2019 have been adjusted to exclude one-time accounting items.

There are a lot of reasons to like Altria. The products are branded and addictive and the market for tobacco products so far is in the hands of a few major players with Altria holding a dominant position. There is some threat of future legislation banning the sale of tobacco products or making it uneconomical. However, local governments take in a ton of money by heavily taxing tobacco products. It is hard to find another scapegoat that can be taxed so heavily.

The other factor to consider is that while the number of smokers is expected to be decreasing over time, so far the increase in prices has more than offset the drop in consumers. At some point, this could reverse, but this has been the fear for several decades now. So far, price increases have more than offset volume declines, which results in growing net income year over time. Future growth in earnings will also be driven by productivity improvements, as well as strategic acquisitions and new product developments. Share buybacks are another tool that could increase earnings per share over time. As an owner of a 10% stake in Anheuser Busch Inbev SA (NYSE:BUD), Altria's fortunes are also tied to the performance of this entity.

New regulations could potentially be bad for e-cigarettes, which compete with Altria’s products. However, there may be regulation against certain types of its products, which is one reason why tobacco stocks seem to have sold off as of recently. I am not sure if I would embrace marijuana’s legalization, or Altria’s deals to acquire stakes in cannabis companies. The cannabis market is still young, and may disrupt the market for tobacco products. The winners from legalization may not be known for years down the road however.

The company is embracing the future for non-heated tobacco products, through expanding IQOS and Marlboro HeatSticks into retail stores statewide across Georgia, Virginia, North Carolina and South Carolina and to the Northern Virginia metro market.

The stock is a very good value today, albeit a risky one, as indicated by the high current yield. That being said, I am taking an increasingly concentrated bet, because I have the highest portion of my dividend income coming from Altria. If I am wrong, and the tobacco business is being disrupted at a faster pace than anticipated, my portfolio could take a hit in dividend income. If the stock goes further down, I would be unable to add further to the position from a risk management perspective. (I have been saying that for two years however)

Growth in earnings per share is impressive, given the fact that the company has paid out 80% of earnings to shareholders annually. In addition, the company also managed to repurchase 10% of shares outstanding during that same time period. 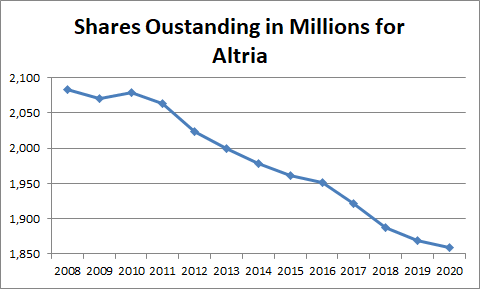 The company just announced a $2 billion share buyback with its annual reporting for 2020. In addition, the net cash from the sale of its Ste. Michelle Wine Estates Business for $1.20 billion will be used for share repurchases too.

Altria would also be able to sell its stake in Anheuser Busch Inbev (BUD) in October 2021. If it does dispose of this stake, it is likely that it would be used to repurchase shares in the open market or distribute a special dividend to shareholders.

Back in 2016, Anheuser Busch acquired UK based brewer SAB Miller, in which Altria had a 29% stake. As part of the ABI Transaction, Altria received a substantial portion of their consideration in the form of restricted shares that cannot be sold or transferred for a period of five years following the ABI Transaction, subject to limited exceptions. There is a a five-year lock-up (subject to limited exceptions) ending October 10, 2021. After that, Altria can sell those shares at the right price. 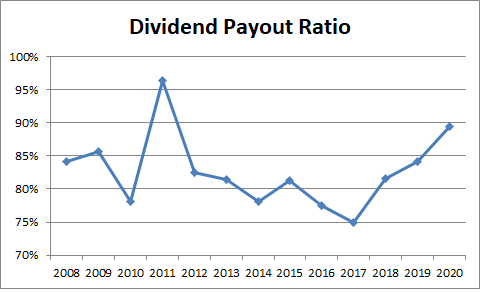 Currently, the stock is attractively valued at 10.69 times forward earnings and yields 7.38%. I believe that the dividend is defensible and can grow over time above the rate of inflation.