The threat of an “IRS audit” is enough to strike fear in the heart of any business owner. We all know about someone with a story about an audit from hell with an over-zealous collections officer. Tax season is around the corner, so you may have started to think about filing your taxes and what deductions you plan to claim. Audits can be an effective method to persuade people to be truthful in their tax returns, but what are the chances you will be audited?

The answer may surprise you. On average, you only have a 1 in 260 chance of being on the business end of an IRS audit. In other words, the IRS only audits 0.4% of tax returns. And 74% of audits are done by letter. So, most taxpayers never see an IRS agent even if they are unlucky enough to get audited.

Such a low ratio of audits is not an anomaly or mistake. This is a trend that has held steady since 2010. The average taxpayer was twice as likely to get audited in 2010 than now. Despite a rise in the number tax returns filed (200.39 million in 2019), the IRS audited only audited 771 thousand of them. 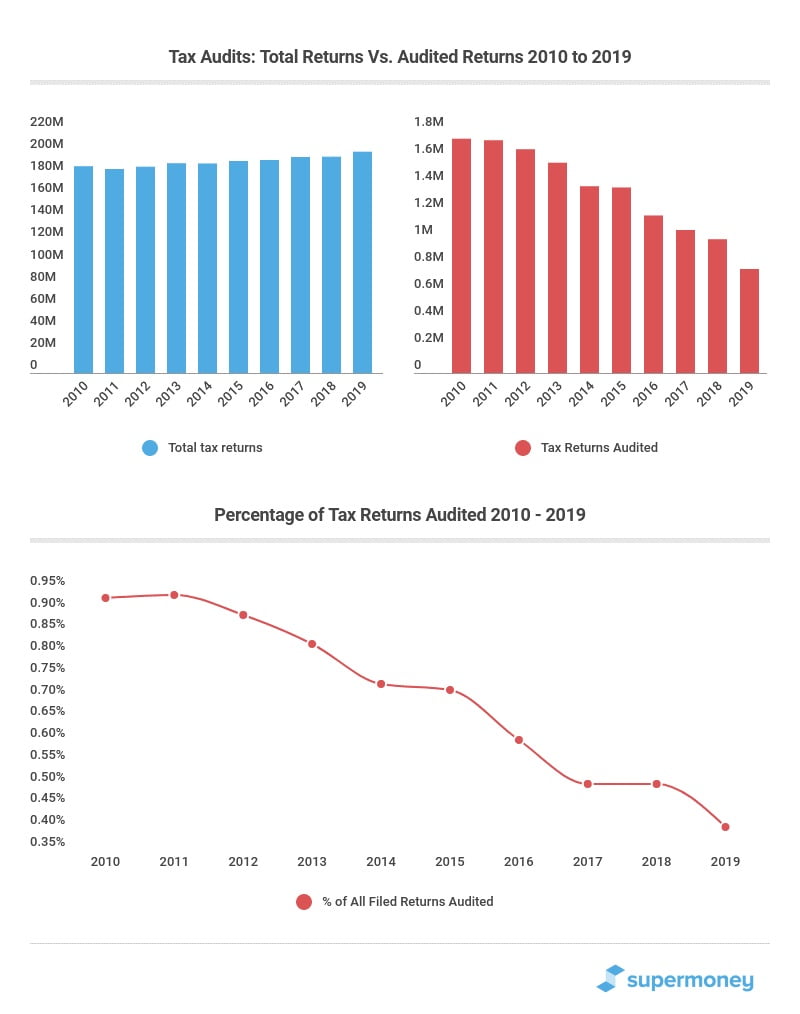 Not surprisingly, the result is the IRS is getting much less money from audits. To be exact, the IRS is now only collecting 41% of what it collected in 2010 (adjusting for inflation). 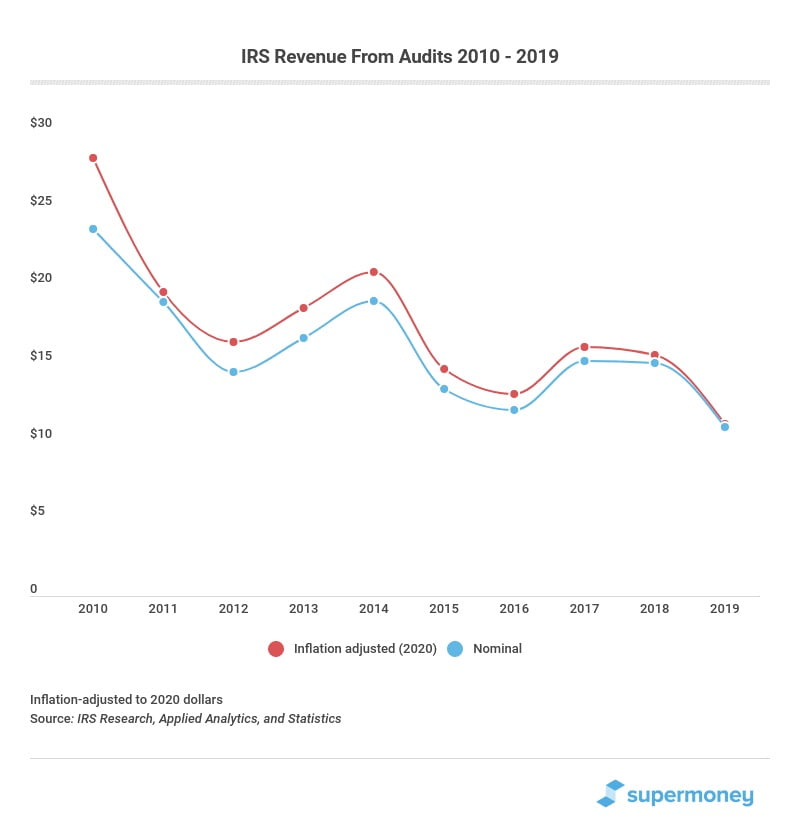 So, why doesn't the IRS hire more agents and audit more taxpayers?

That is a good question. The quick answer is the IRS can't afford it. It simply doesn't have the budget to hire more agents and examine tax returns adequately. Funding for IRS enforcement has dropped by $1.6 billion since 2010 despite a rising number of taxpayers (13.3 million more tax returns in 2019) and an increasingly complex tax and banking system. 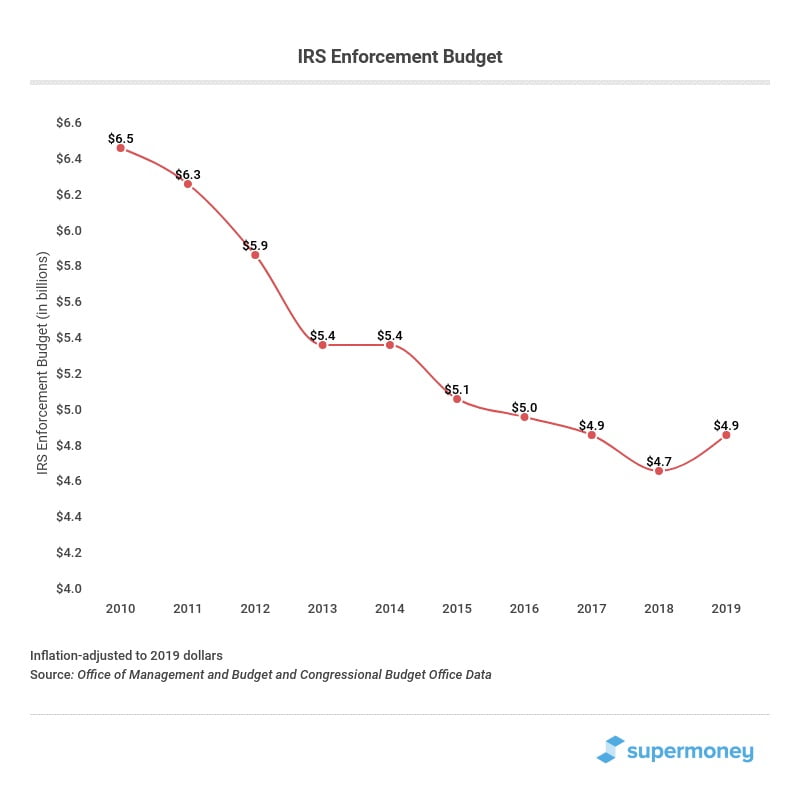 The IRS is understaffed and underfunded, and yet it's still an efficient source of revenue. The IRS only spends $0.33 in operating costs for every $100 it collects in taxes. Its budget has been slashed in the last decade despite a ballooning national debt. This means the IRS has to focus its efforts on the revenue collecting activities on the low hanging fruit. Audits, particularly when they involve high-income taxpayers, are expensive and require highly trained and experienced IRS agents.

Another issue is nonfilers. People who have an income but don't file a tax return. According to a report by the Treasury Inspector General for Tax Administration published in May 2020, the IRS didn't even try to audit more than 879,415 high-income nonfilers with an estimated tax due of $45.7 billion3 because they didn't have the staff to handle the work.

Wealthy taxpayers are still more likely to be audited -- as you would expect -- but the gap has narrowed dramatically. In 2011, 12.5% of millionaires were audited. Fast-forward to 2019 and only 2.4% of millionaires get audited. In contrast, 1.2% of taxpayers who claim the Earned Income Tax Credit (EITC) and earn less than $25,000 a year get audited, which is three times more likely than the average tax return.

Why are the working poor so likely to get audited?

According to the Center on Budget and Policy Priorities, as many as 25% of EITC claims contain errors4. This is partially because the rules of this credit are complicated, but there are also those that try to game the system. For instance, sometimes both parents will split the children and file as head of household so they can both claim the EITC.

Does this mean taxpayers can lie and cheat and always get away with it?

Not by a long shot. Although it is true that IRS audits are shockingly low now, the IRS is not completely toothless. It uses sophisticated algorithms to profile taxpayers and look for "red flags" in tax returns that signal a higher likelihood of "mistakes" and tax evasion. Here are a few examples.

The bottom line is IRS audit rates are at historically low levels. IRS agents only examine 1 in 260 tax returns (0.4%). You can improve those odds by avoiding the red flags the IRS uses to profile taxpayers. Millionaires, business owners that are aggressive with tax deductions, and low-income taxpayers that claim EITC have a higher chance to get audited, but it's still unlikely.