The report unpacks mobile bank design: why an attractively designed experience will be critical to growing engagement, and the processes that have guided regional and community banks in creating their respective apps. It features:

The proliferation of mobile has given rise to a segment of bank clients that’s stickier and more profitable than any other. Evidence suggests the channel will continue to grow in importance, and banks are beginning to invest accordingly.

Everyone knows mobile banking is important. The ubiquity of smartphones and customers’ ever-increasing reliance on mobile banking apps for transactions is salient, but obvious. What’s more critical to understand is the ways that widespread mobile banking adoption impacts an institution’s bottom line.

The value proposition for mobile is easy to appreciate. Take a growing channel, use it to attract mobile users — who have been shown to be the stickiest, most active and most profitable customer segment for a bank — then subtract all the money not being spent completing transactions through less-efficient, physical channels. The result is increased revenue and savings.

One institution that’s reaped the rewards of prioritizing mobile is Bank of America Corp. The nation’s second biggest bank by assets enjoys some of the highest levels of digital adoption among U.S. financial institutions. Its second-quarter 2020 earnings illustrate both the prevalence and significance of the mobile channel.

The number of mobile banking users has increased steadily at Bank of America. Digital logins to its app grew 20% over the second quarter of 2019; average logins per user rose 14%. The bank topped 30 million mobile users at the end of June, roughly half of which have also used the app’s virtual assistant, Erica.

More interestingly, though, is that 85% of bank deposit transactions during the second quarter of 2020 occurred digitally. And almost half (47%) of all sales at the bank now take place over the same channel — of that, almost 60% of digital sales were completed on a mobile device.

Similar numbers can be found at institutions like U.S. Bancorp, where the Covid-19 pandemic and subsequent reduction in branch traffic produced a spike in mobile usage. At the Minneapolis-based bank, 76% of all transactions and 46% of loan sales occur digitally. Chairman and CEO Andrew Cecere said the bank “expect[s] digital adoption by customers to stick, even after the economy fully reopens,” during its second-quarter 2020 earnings call.

The folks at banking technology provider Fiserv have also seen an increase in mobile usage as a result of the pandemic. “We’ve seen logins doubling,” confirmed Kathy Ligman, vice president of product management, digital channels, in July 2020. “Mobile check deposits are up 30%. And we are seeing a significant increase in Zelle usage as well — over 100% year-over-year.”

Evidence suggests that the uptick in digital adoption will have staying power within banks and among consumers.

Many banks have revised their priorities to focus on digital initiatives, according to the results of Bank Director’s latest Technology Survey. The research, conducted in 2020, showed an important shift in the balance between the channels that bankers consider to be the most important to their institution’s growth — 50% now believe the digital channel is most important. Less than half of bankers place equal value on both the branch and digital channels.

In addition, digital upgrades were the leading initiative for banks that altered their technology roadmaps as result of Covid-19, according to the survey. Of these respondents, 74% either did or planned to enhance mobile and online capabilities in response to the virus.

This pivot couldn’t have come a moment too soon. New Jersey-based Provident Financial Services has conducted research on consumers’ digital banking preferences for the last two years. In October 2019, their study revealed that online and mobile were the preferred banking channels for 79% of survey respondents. Eight months later, 31% of respondents said they had shifted to relying primarily on digital channels — even before the pandemic hit. Meanwhile, 56% said they would rely primarily on digital channels for their banking needs post-pandemic. Across each of these questions, the percentage of respondents that relied primarily on in-person banking was no more than 5% to 7%.

After years of decline for branch banking, mobile channels have emerged as a dominant business driver for banks. The channel’s proliferation over the last several years requires institutions to take a fresh look at the medium for what it is becoming: the primary channel for communicating with, serving and selling to customers. 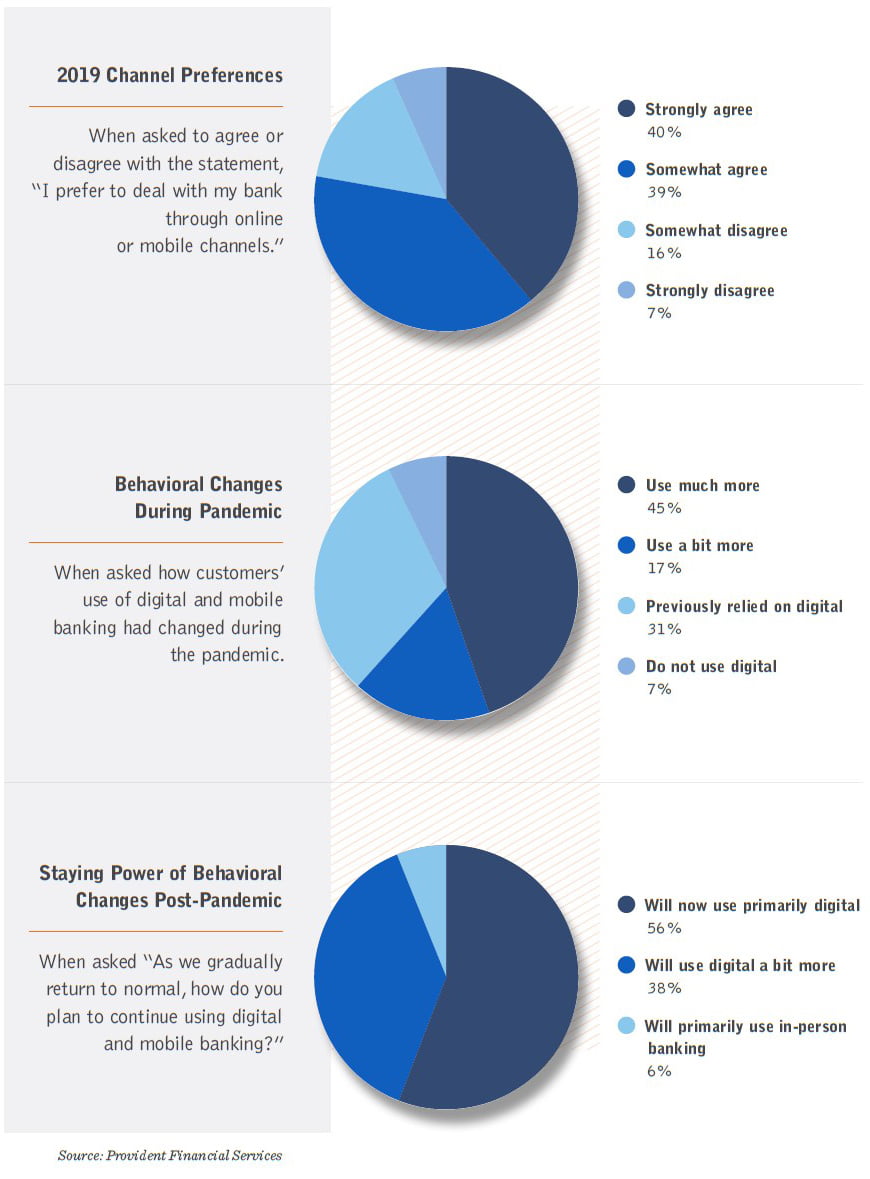 Andy Harmening joined Huntington Bancshares three years ago with an unproven hypothesis. The director of consumer and business banking believed that Huntington could create personalized experiences in its digital channels. “I told everyone we could,” Harmening recalls, “but I wasn’t positive if we could.” Since then, Harmening has confirmed his hunch.

Huntington has been awarded top spots in the J.D. Power U.S. Banking Mobile App Satisfaction Study in each of the last two years, thanks to the digital, yet personal, experiences it has created. In 2019, the $118 billion bank based in Columbus, Ohio, ranked highest among banks in overall satisfaction.

A reporter asked Harmening whether he thought Huntington was big enough to compete with the likes of Bank of America after the award announcement. Harmening responded simply, “we’re big enough to listen to our customers.”

The team at Huntington believes deeply in the power of listening. Before it set about building its mobile banking app, The Hub, the bank embarked on a two-year “listening tour” road trip to learn from real customers throughout the Midwest about what they needed most in a mobile experience.

“We literally sat across from them, in their homes, and had them walk us through what they did,” Harmening remembers.

Customer research formed the basis for The Hub’s offerings, but before Huntington rolled out the app for customers, it did even more listening — completing an internal pilot with 10,000 bank employees. Their feedback led to many changes to the platform, which Huntington’s IT team implemented in weekly, agile sprints. Huntington launched The Hub in 2018. It gives customers the ability to categorize and track expenditures, set budgets and savings goals, and receive alerts about what expenses or issues might be coming in the month ahead.

In 2020, the J.D. Power survey recognized The Hub as the top regional bank offering, but Huntington wasn’t satisfied. A month later, it launched a new Hub feature called Money Scout, which identifies funds that are safe for customers to save and then transfers them automatically.

Banks are in a powerful position to know their customers’ cash flow, savings goals and transaction histories, Harmening believes, giving them a responsibility to use that data to help customers become more financially secure.

“If you start with the people and understand them from their data, you can make digital incredibly personal and incredibly helpful,” he says. “That’s what people need.” Focusing on what people need is the linchpin of Huntington’s award-winning mobile strategy. Serving customers well leads to stronger relationships, financially healthier customers and, ultimately, more revenue and cost savings for banks.