Why Tesla shareholders should consider hedging while times are good.

At the end of May, Elon Musk’s SpaceX sent two astronauts into space – the first manned launch from U.S. soil in nine years. Since then, shares of Musk’s other company, Tesla, have rocketed past another milestone, closing above $2,000 on Thursday.

Now it's time for Tesla (TSLA) shareholders to hedge. I don't say this because I'm bearish on Tesla - I'm not. Every trading day, Portfolio Armor analyzes returns and options market sentiment to rank every optionable security in America, and Tesla has been one of its top ten names since March 28th.

Tesla was one of our top ten names again on Thursday, despite climbing more than 148% since its appearance in the top ten on May 28th. This was our full top ten for August 20th: 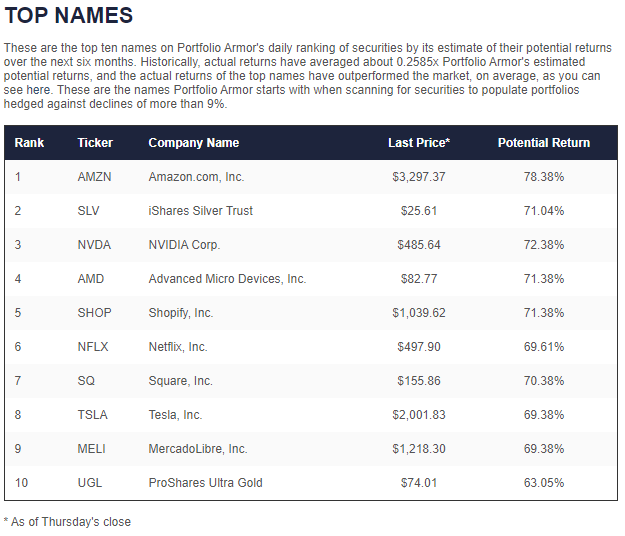 Although Tesla stayed on the list, as you can see, all the fixed income names dropped off over the summer. Right now, our system is bullish on tech and precious metals. Nevertheless, one reason to hedge Tesla here is because its previous parabolic moves higher have been followed by steep drops. Another reason is what the presence of precious metals names in our top ten now suggests.

Every security in our top ten is there because options market participants are betting on it to go higher over the next six months. If we consider that options traders are bullish on gold and silver ETFs as well as Silicon Valley's auto company and other tech stocks, we're left with two possible interpretations. The first is that this is all a continuing reflation bet. The second is that the options market participants buying calls on the precious metals ETFs are expecting them to get higher bids as a haven in the next six months as the tech names (and the broader market they've been leading) crash. In the event the second interpretation proves to be correct, the video below shows a couple of ways of hedging Tesla here.