A new report from NEB discussing Brazil’s green economic recovery in the post-COVID world, titled, “New Economy for a New Era: Elements for Building a More Efficient and Resilient Economy in Brazil”

Brazil’s economy was in trouble before COVID-19 hit. Now, it is expected to contract between 8% and 9.1%. How Brazil responds to recession will have enormous economic and environmental consequences for the world.

New research, from an influential partnership of Brazilian and international groups and champions, finds that a green economic recovery will allow Brazil’s economy to grow moreover the next decade than business-as- usual, starting in the first year. Newly identified benefits include:

A New Economy For A New Era: Elements For Building A More Efficient And Resilient Economy In Brazil

Today, the world is facing an unprecedented convergence of crises: The health, economic, and employment crises caused by COVID-19, as well as the ongoing crises of rampant inequality and climate change. Brazil is no exception. Even before the COVID-19 pandemic, unemployment in Brazil almost doubled between 2014 and 2018, reaching 11.8%. This year, Brazil’s economy is expected to contract between 8% and 9.1%.

As in all countries, the COVID-19 pandemic has exposed and magnified the weaknesses in Brazil’s society and economy. There is no incentive to return to the same broken economic systems as before. In addition, current deforestation rates have prompted international and domestic backlash, and could reach a tipping point that threatens the agricultural sector.

Far from being a hindrance, green growth is, in fact, a proven economic driver. Research shows this to be the case globally as well as in individual countries, including Indonesia, the United States, and, as demonstrated through this study, for Brazil. Done right, a green economic recovery can help make Brazil a fairer, stronger, safer and cleaner country.

New economic modelling, undertaken by the New Economy for Brazil initiative, finds that a green economic recovery will allow Brazil‘s economy to grow more over the next decade than the current development model, starting in the first year. While this modelling work was conducted pre-COVID, the basic results still stand. GDP growth is likely to be negative in 2020, given the economic crisis, but these new economic pathways offer Brazil a stronger and better economic recovery trajectory and employment boost than a business-as-usual recovery.

By 2030, compared to business-as-usual, a low-carbon, climate resilient economic recovery in Brazil could deliver: 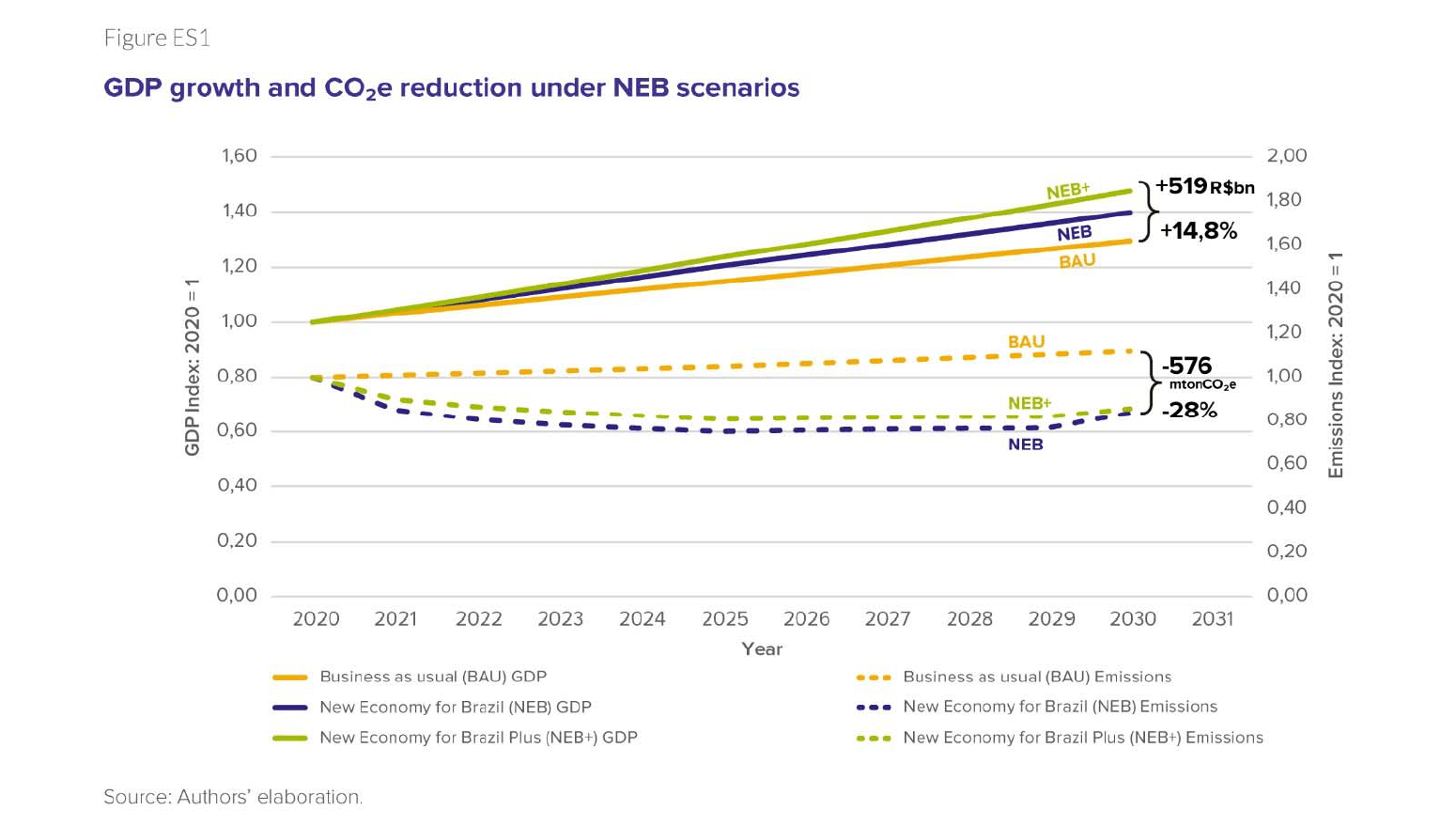 Source: A New Economy for a New Era: Elements for Building a More Efficient and Resilient Economy in Brazil

These findings are the result of three scenarios explored for this study, each of which incorporates increasing degrees of intensity and penetration of economic transition measures:

Brazil’s new green economy can be achieved through prioritizing and scaling existing best practices in infrastructure, industry and agriculture. More specifically, the economic and social benefits of Brazil’s green recovery can be achieved by:

Finally, finance is a cross-cutting theme among infrastructure, industry, and agriculture. The study presents evidence showing that by mainstreaming sustainable investment decisions into planning and implementation decisions, Brazil could benefit from trends in the financial markets and widen access to private finance.

About The New Economy For Brazil Initiative

The New Economy for Brazil (NEB) initiative was established to identify development policies that reduce poverty and inequality, contribute to meeting economic and sectoral goals and stimulate environmentally sustainable and inclusive economic growth.

The initiative’s inaugural report, A New Economy for a New Era: Elements for Building a More Efficient and Resilient Economy in Brazil, summarizes how a green COVID-19 recovery could deliver a stronger economy at home, and a competitive edge abroad.