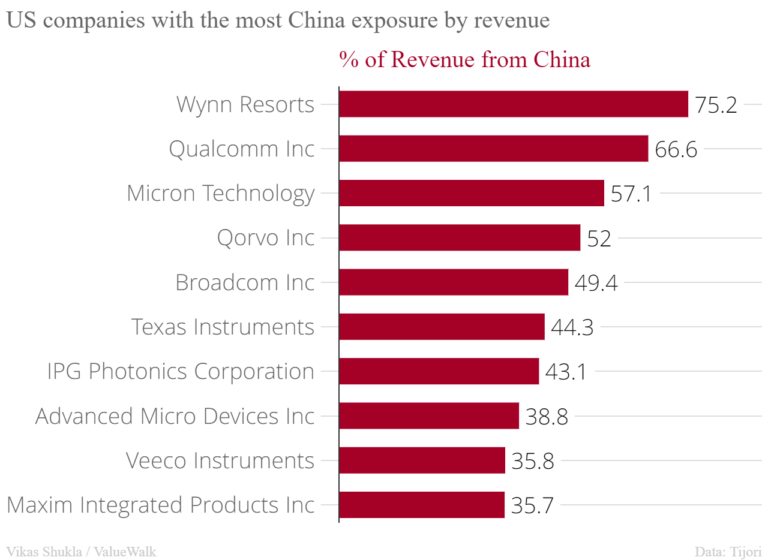 Relations between the United States and China have worsened over the last few years. The trade tariffs, the novel coronavirus, the Hong Kong security law, the closure of consulates, and China’s expansionist mindset have all contributed to the downturn in the US-China relations. The growing anti-US sentiment in the world’s most populous country could hurt American businesses that have a strong presence in China. Here we take a look at the top 10 US companies with the highest revenue exposure to China.

Contrary to the popular perception, Apple generates only about 17% of its revenue from China. Boeing, Caterpillar, General Motors, Starbucks, Nike, and Ford are some other US companies with a strong presence in the country. But none of them get more than 25% of their revenue from China.

It's the US chipmakers that have the highest revenue exposure to the country. The list below is based on data from Tijori Finance and includes only the S&P 500 constituents. Tijori has determined the revenue exposure to China based on Customer Ship-to Location. Some smaller companies could have a disproportionately large revenue from China.

It is challenging to determine a company's exposure to the Middle Kingdom even if you look into the company filings and other company-reported data. That's because every company takes a different approach to reporting their international revenue and profit numbers. Many don't break out the China sales data. For example, Amazon lumps the non-US sales together.

Some companies report sales data for China, other report for Greater China, yet others present sales for China including Hong Kong. Then there are some companies that lump the China and Taiwan sales together.

US companies with the highest revenue exposure to China 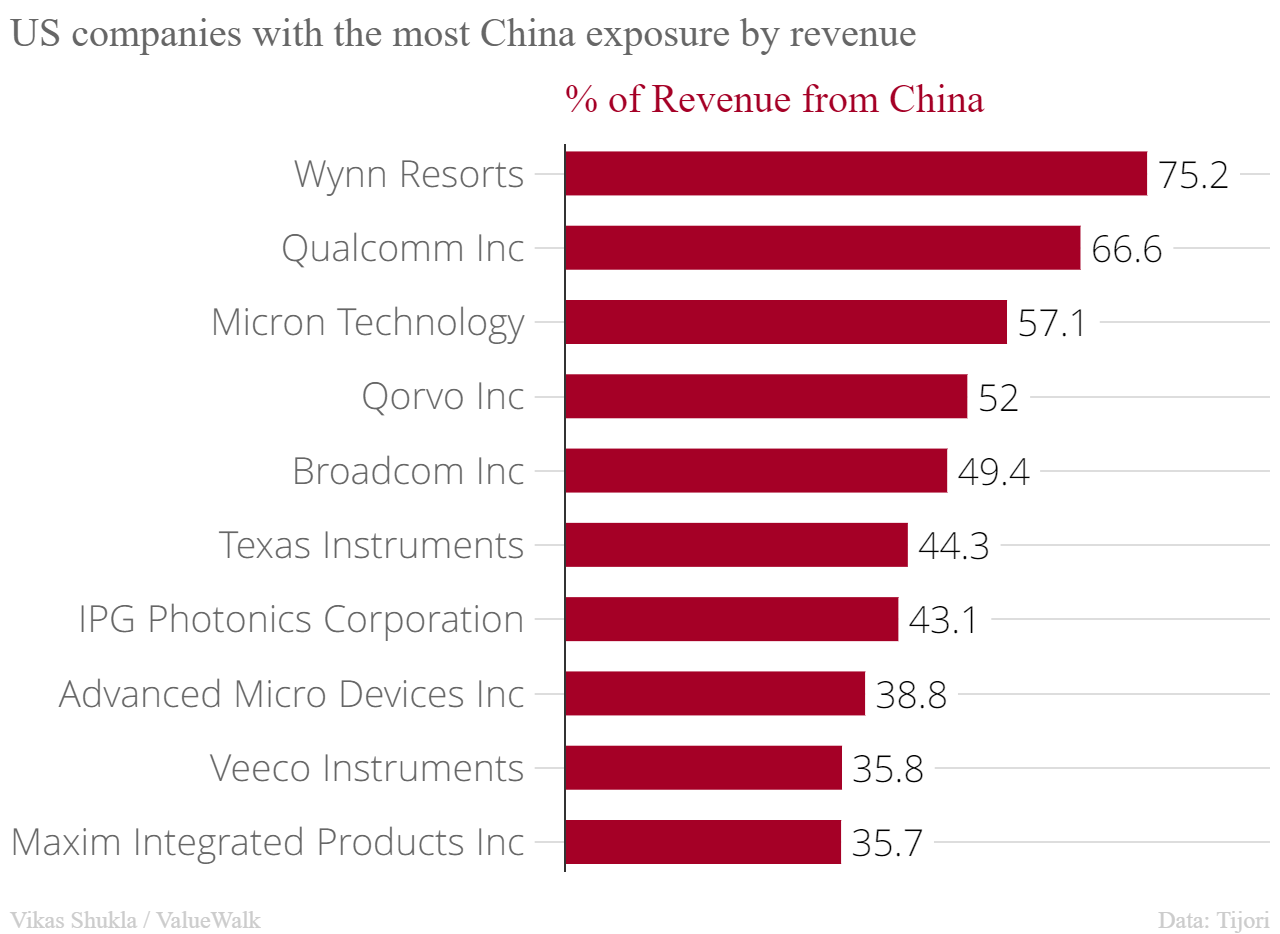 Topping the list is Wynn Resorts, which operates three casinos in Macau. It also has two casinos in Las Vegas and another in Everett, Massachusetts. Wynn Resorts' Macau casinos account for 75.2% of its revenue. According to Tijori Finance, the Macau operations generate about 77.1% of its operating profits.

Semiconductor giant Qualcomm is close behind with 66.6% revenue exposure. A large chunk of Qualcomm's shipments go to factories that assemble smartphones and other products. China is home to some of the world's largest smartphone vendors including Xiaomi, OnePlus, Oppo, Vivo, Lenovo and others, most of which use Qualcomm chips in their products.

Micron Technology occupies the third spot with 57.1% revenue exposure to China. By comparison, the US accounts for merely 11.9% of its revenue. It is one of the world's leading makers of computer data storage solutions such as USB flash drives and NAND flash memory.

Qualcomm is not the only semiconductor company in the top ten. Qorvo has 52% revenue exposure to China. It makes radio frequency systems that are used in wireless and broadband communications. Qorvo was created following the merger of TriQuint Semiconductor and RF Micro Devices.

Broadcom gets close to 50% of its revenue from China, according to Tijori Finance. Broadcom is involved in designing, developing, and marketing semiconductor and infrastructure software products.

Dallas-based technology giant Texas Instruments is a leading manufacturer of semiconductors and a wide range of integrated circuits. It sells its products directly to electronics manufacturers, most of whom are concentrated in China. About 44.3% of Texas Instruments' revenue comes from China alone.

Oxford, Massachusetts-based IPG Photonics is a leading maker of fiber lasers. It doesn't have a manufacturing facility in China, but the dragon is a huge market for the company. IPG Photonics has 43.1% revenue exposure to China.

AMD is another chipmaker heavily exposed to the country. About 39% of its revenue comes from the Asian nation. The Santa Clara-based company manufactures motherboard chipsets, graphics processors, and microprocessors for both consumer and enterprise markets.

Veeco Instruments makes processing systems that are used to build semiconductors, photonics, and display technologies. Its revenue exposure to China is 35.8%. Maxim Integrated Products rounds up the top ten with 35.7% revenue exposure. It designs and manufactures analog and mixed-signal integrated circuits.