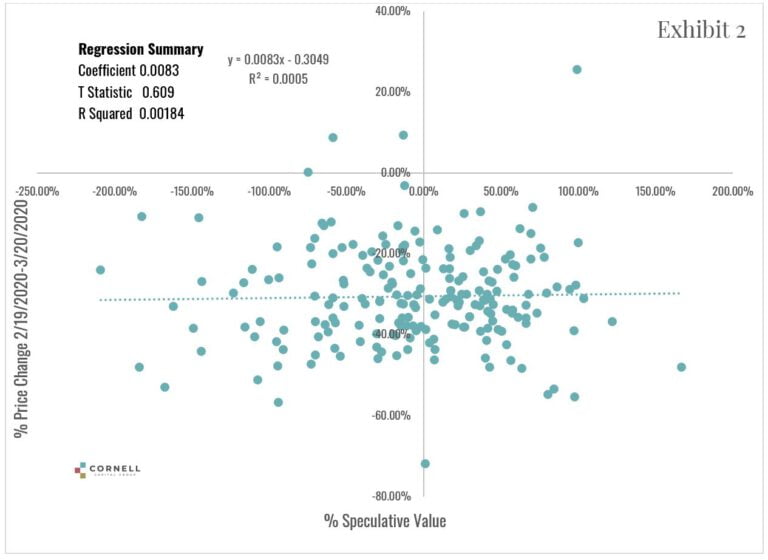 To illustrate the breakdown, the AQR authors use the examples of Starbucks and Chipotle.  At the time of their calculation, the share price of Starbucks was $87.92.  The authors show that this breaks down into a book value of ($5.26) per share – the book value is negative because the large number of buybacks – plus a predictable earnings value of $84.28, plus a speculative value $8.90.  In comparison, Chipotle’s stock price of $837.11 breaks down into a book value of $52.10, a predictable earning value of $327.85, and a speculative value of $457.22.

What we were interested in at Cornell Capital Group was how the sharp run-up in stock prices that began on March 19, 2020 was related to speculative value.  Did the market favor companies with predictable earnings over those with high speculative value or vice-versa?  To answer that question, we started with all US and Canadian listed stocks with market capitalizations over $30 billion (as of May 11th, 2020) that had available earnings estimates. Our final sample consists of 204 companies.

Using the AQR model, we breakdown the share price of each sample company into the three components, book value, predictable earnings value, and speculative earnings value, each expressed as a percent of the stock price.  It is interesting to note that the value of the speculative component ranges for a high of 167% for Uber (due to forecast losses for this year and next) to a low of -184% for GM (which has a particularly high book value and high predictable earnings value compared to the current stock price.)  A comparison between GM and Tesla, which has a speculative value of 85%, is particularly provocative.  The market places a huge value on Tesla’s speculative earnings while assuming that GM’s are markedly negative. 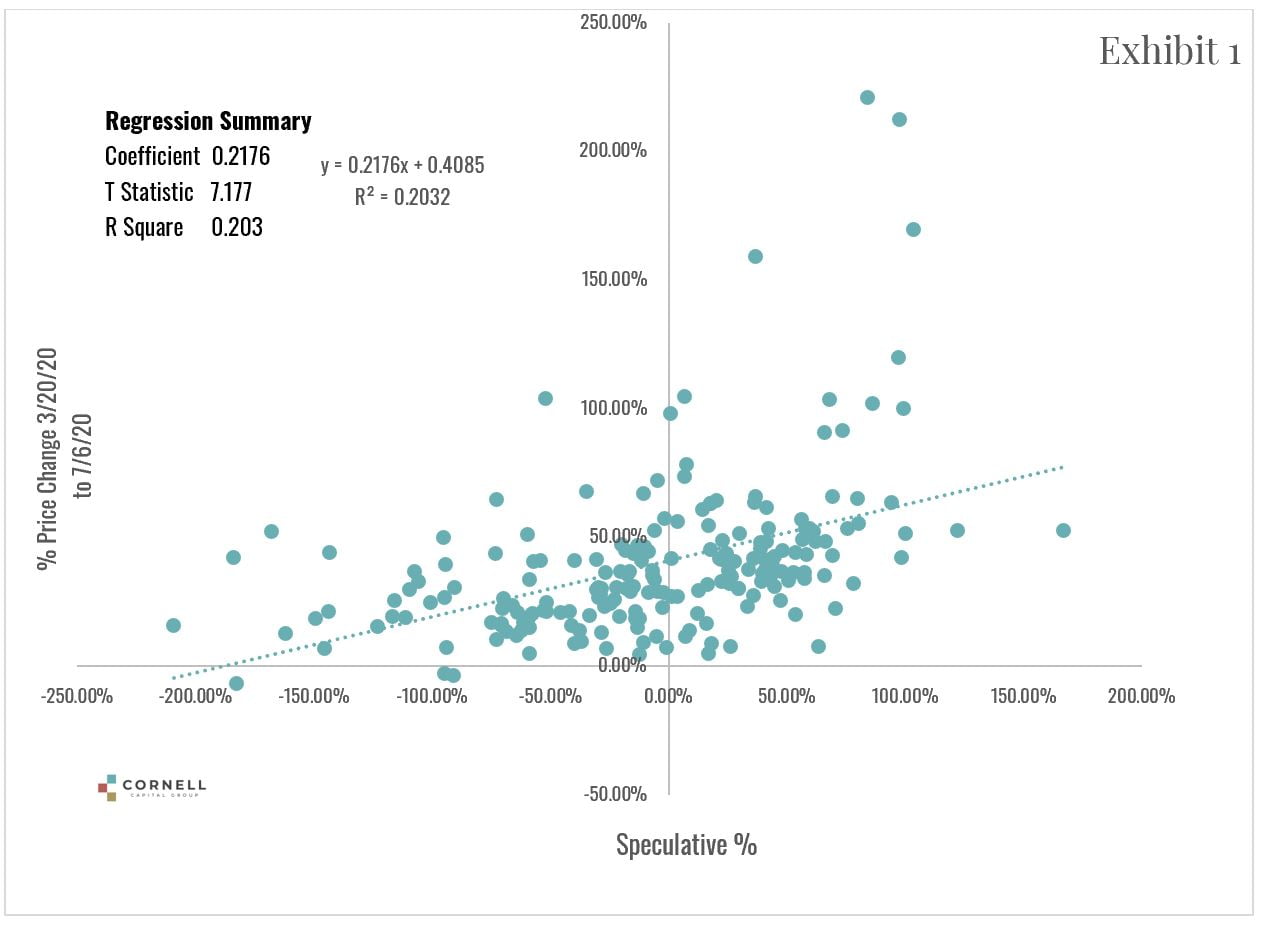 Adding Beta To The Regression

Given the highly significant relation between the fraction of speculative value and stock changes during the run up, we thought it would is interesting to check if a similar relation held during the stock price collapse from mid-February to March 20.  To investigate, we collected data on the stock returns for our sample companies over the period from February 19, 2020 to March 20, 2020 during which time the S&P 500 dropped 32.38% and reran our regressions. 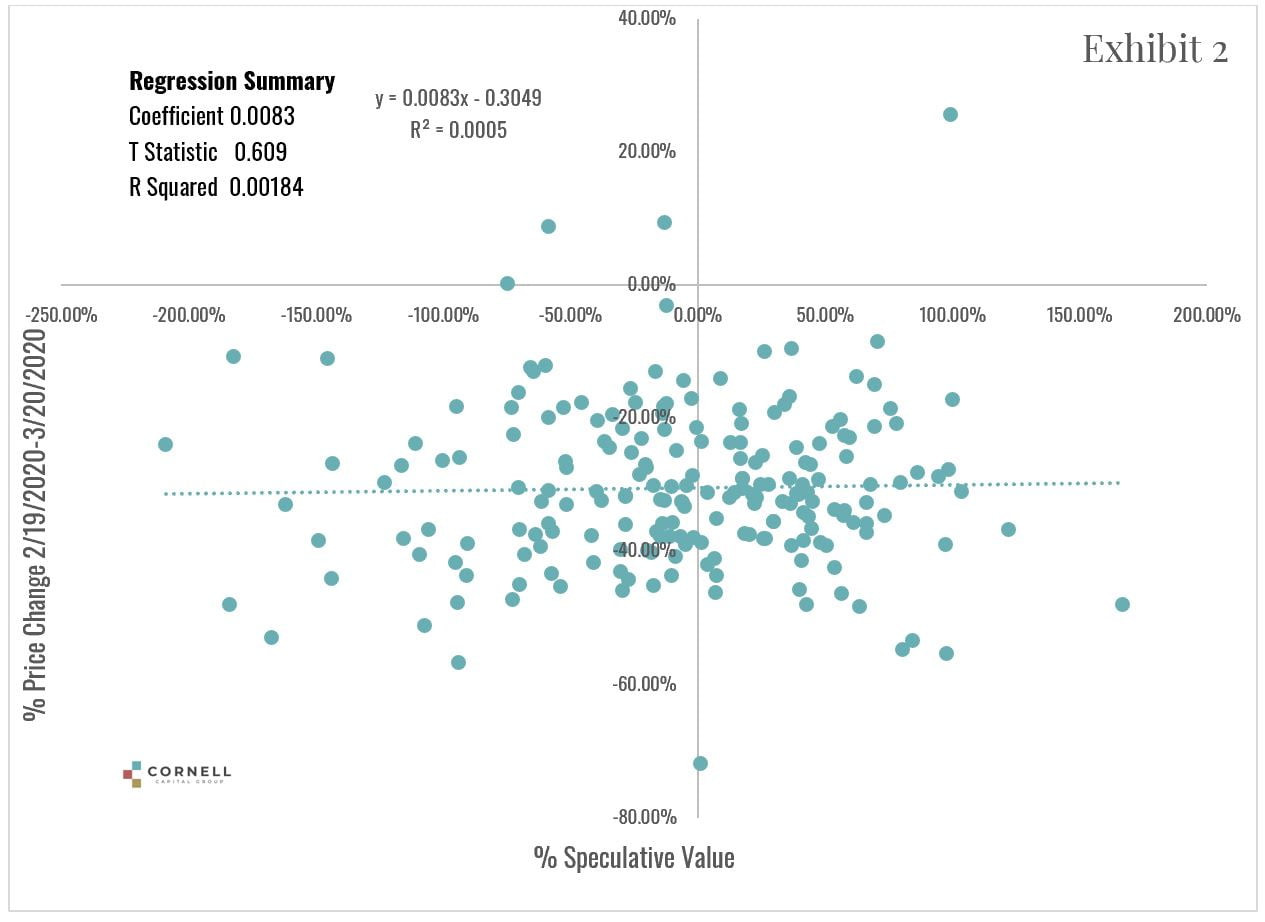 The results reported in Exhibit 2 are markedly different from those in Exhibit 1.  Instead of being significantly positive, the coefficient for the percentage of speculative value is almost identically zero so that the regression line is virtually flat and the R2 is essentially zero.  The lack of a relationship can also be seen by looking at the scatter plot which is just an amorphous cloud.  The conclusion is that during the market decline there was no relation between the extent of drop and the percent of speculative value.  Finally, we again added beta to see if it affected the regression results.  Once again adding beta had no impact.

While it is tempting to speculate as to why the market treated stocks with a high fraction of speculative earnings so much differently during the decline than during subsequent rebound, we leave that exercise to our readers.