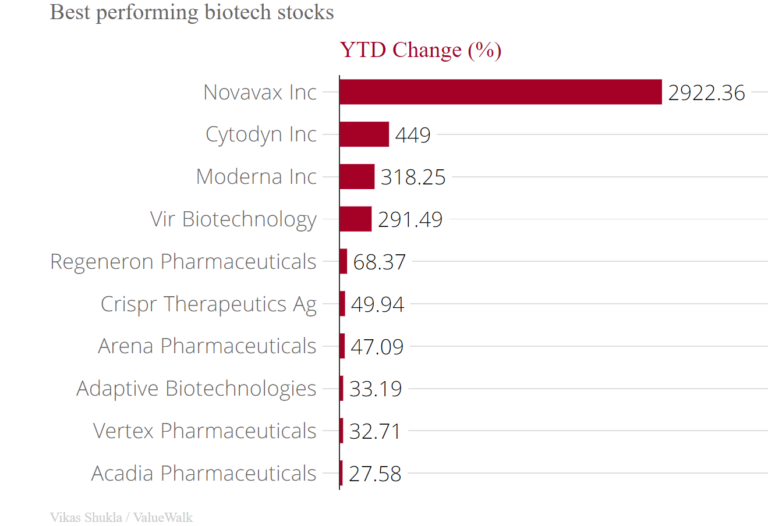 Dozens of pharma and biotech stocks have skyrocketed in the last few months amid the COVID-19 pandemic. The companies are spending heavily on research and development to find a treatment or vaccine for the coronavirus. Typically, most pharma and biotech companies spend about 20% of their revenue on R&D activities. But the R&D spending will likely shoot up this year. Here we take a look at the top ten best and worst performing biotech stocks this year (as of July 16, 2020).

The coronavirus cases are setting new records not only in the US but in other countries as well. The total number of cases has surpassed 14 million worldwide. The pandemic has claimed at least 593,000 lives. The US alone accounts for a quarter of the global cases and deaths. 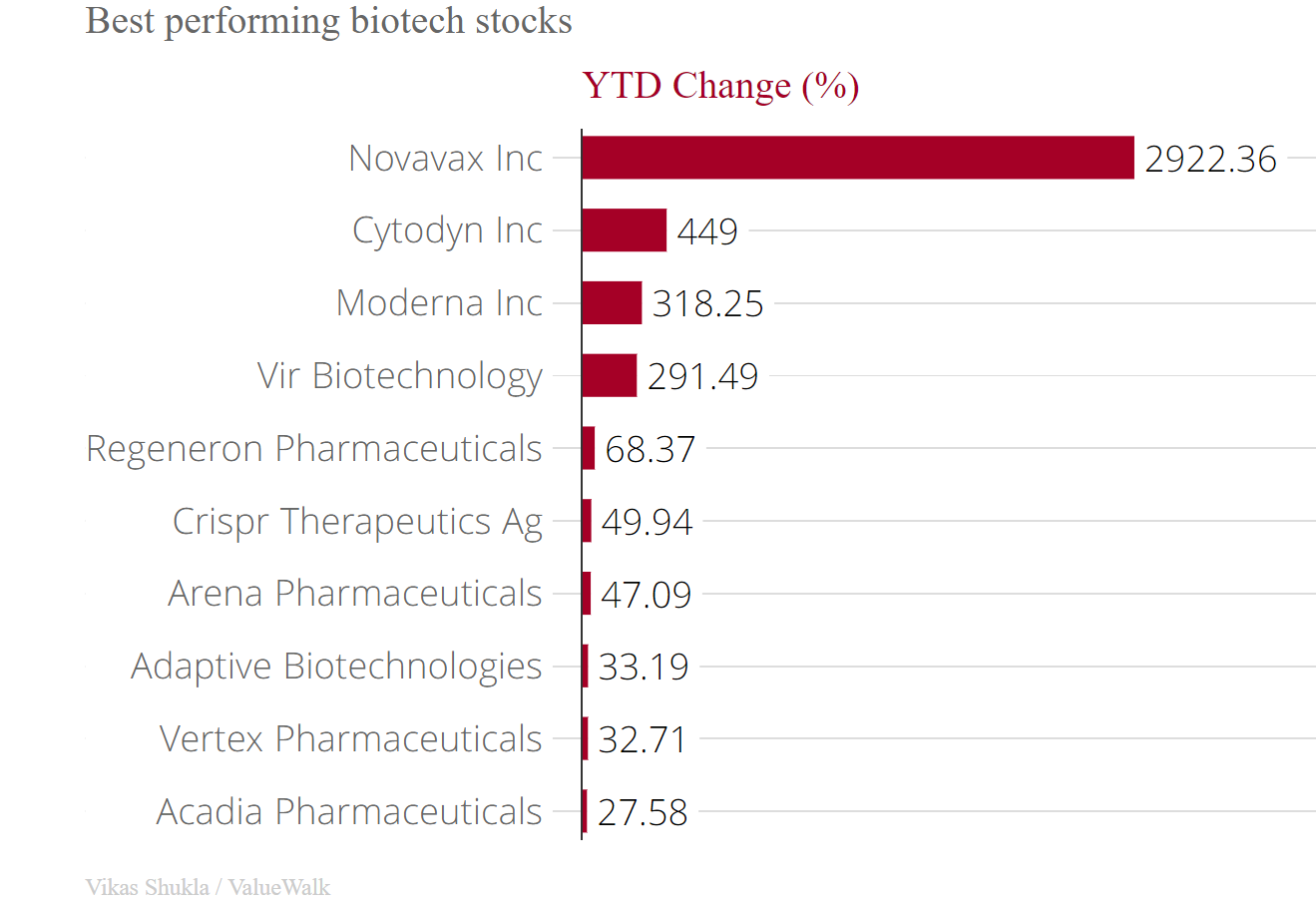 Nasdaq-listed Novavax is the best performing biotech stock this year so far. The Gaithersburg, Maryland-based biopharma company is developing a coronavirus vaccine. It is among the front-runners in COVID-19 vaccine development. Novavax recently joined the US government’s Operation Warp Speed program. It has received a staggering $1.6 billion from the government to speed up the development of its coronavirus vaccine.

Novavax stock has shot up from $4.5 at the beginning of this year to $120.29 on July 16. It’s still trading far below its 2001 high of $290 per share. It is followed by CytoDyn, which has gained 449% year-to-date. The company is testing its leronlimab drug as a treatment for COVID-19. Leronlimab is an experimental HIV drug.

Moderna stock is up 318.25% this year so far. Moderna was the first biotech company to start human trials for a candidate vaccine against the novel coronavirus. Its mRNA-1273 vaccine candidate entered the Phase-1 clinical trials on March 16th. The company also has many other products in the pipeline for solid tumors, Cytomegalovirus Infectious Disease, and lymphoma.

Vir Biotechnology shares have rallied 291.49% YTD. The San Francisco-based company announced in April that it has joined hands with GlaxoSmithKline to develop treatments for COVID-19. GSK agreed to invest $250 million in Vir Biotechnology as part of the deal.

Regeneron Pharmaceuticals has been the fifth best performing biotech stock of the year. Its arthritis drug Kevzara was seen as a treatment of COVID-19, but it has fell short of expectations. Regeneron’s chief scientific officer George Yancopoulos has been named one of the greatest heroes of the coronavirus pandemic. 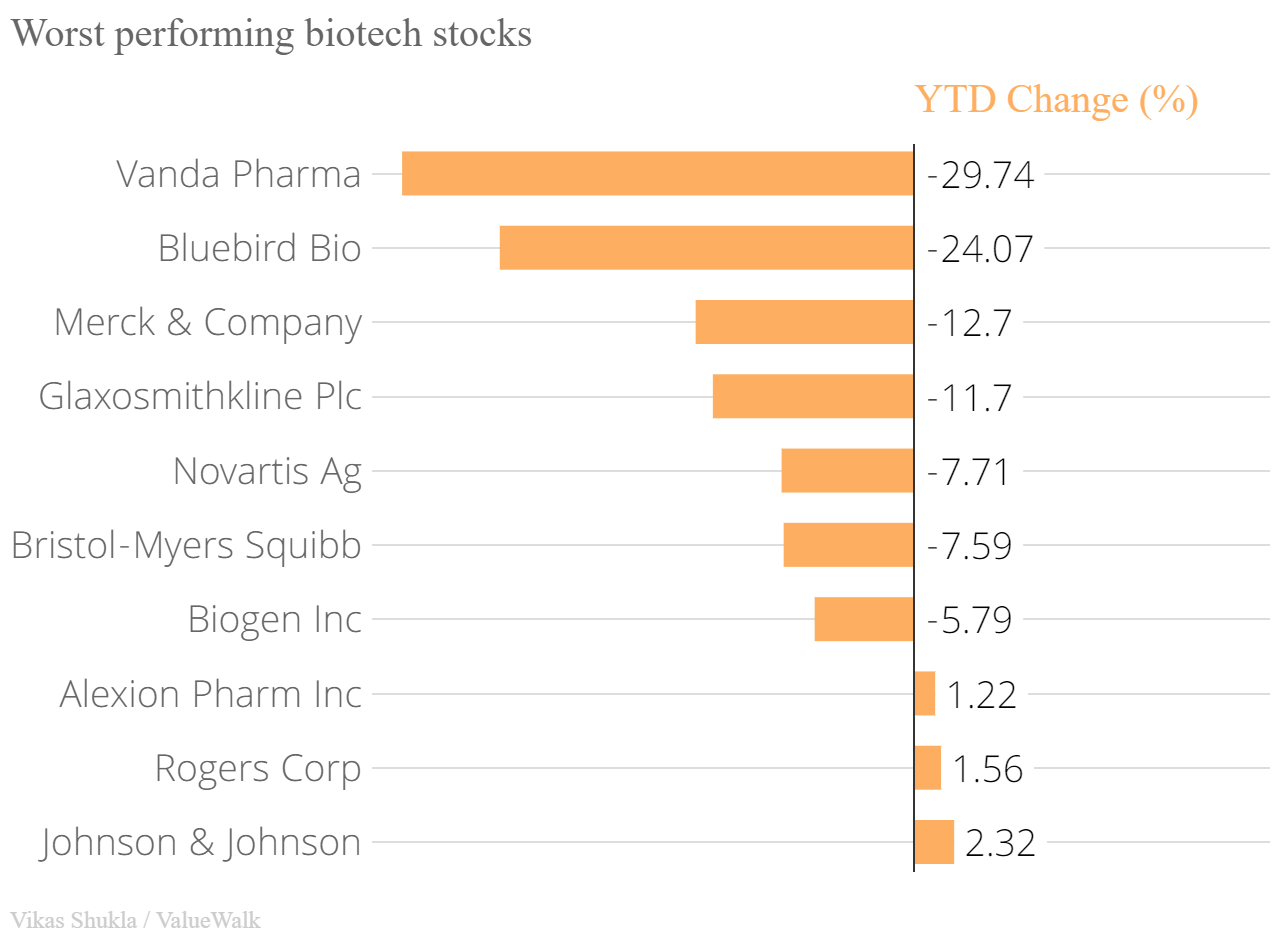 While the best performing biotech stocks have gained manifold this year, the worst performing ones haven’t done so bad. Nasdaq-listed Vanda Pharmaceuticals is down nearly 30% year-to-date. The company has a couple of drugs in the market, and a few in clinical trials. But Vanda has been accused of not following the label guidelines when prescribing its Hetlioz and Fanapt drugs.

Cambridge, Massachusetts-based Bluebird Bio has seen its stock go down 24% this year so far. The stock has lost about 75% since the March 2018 peak of $232. It develops and markets therapies for genetic disorders.

Occupying the third spot is Merck, down 12.7% YTD. Merck develops drugs, biologics, and vaccines in therapeutic areas such as oncology, cardiovascular, and endocrinology. Its cancer immunotherapy drug Keytruda has been a blockbuster.

The UK-based healthcare giant Glaxosmithkline has seen its share prices drop 11.7% this year. Last year, GSK joined hands with Pfizer to combine their consumer health businesses into a new joint venture, allowing it to focus on innovative drugs.

Shares of the Swiss drugmaker Novartis are also down 7.7% year-to-date. New York-based Bristol-Myers Squibb and Cambridge-based Biogen are also in the negative. Despite ranking among the worst performing biotech stocks, Alexion Pharma and Rogers are in the green.