The 2020 proxy season has been both unusually urgent and challenging. As COVID-19 and the Black Lives Matter movement begin to reshape both corporate and investor priorities, we are simultaneously preparing for the first in a series of 14a-8 rule changes by the SEC which could dramatically limit investors’ access to the proxy. In spite of this uncertain landscape, ICCR members set a new record this year of 114 corporate commitments on a wide range of issues, surpassing last year's 107.

We are proud to share with you the 2020 edition of Catalyzing Corporate Change - our annual end of season report detailing the outcomes of the 281 shareholder resolutions filed by ICCR members for 2020 proxies.

Here are a few key highlights: 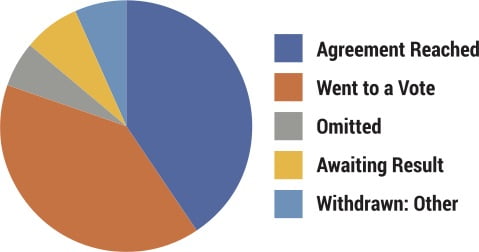 ICCR member proposals accounted for nearly half of all ESG proposals receiving majority support. The two highest votes so far this season were for proposals addressing human capital management.

AGMs Go Virtual: COVID-19 forced most companies to abandon in-person annual shareholder meetings and switch to a virtual format. To help ensure investors’ ability to participate in the Q&A sessions, ICCR launched the #AskTheCEO video campaign, capturing their questions for the record.

A Focus on Workers: At 52 proposals, our members’ human- and worker-rights-focused resolutions emerged as the dominant issue this year, just nudging past proposals related to climate change and lobbying.

All Eyes on Amazon: ICCR members filed nine proposals at Amazon, more than they sent to any other company this year. The proposals resulted in two agreements: one on human trafficking (Adrian Dominican Sisters), and another on the risks of third-party sellers (Mercy). In addition, there were five votes exceeding 30%.

Covid-19 and Racial Justice Re-Shape ESG Investing: ICCR members are taking action on several fronts to ensure that as businesses respond to the pandemic, they do so in a way that safeguards all their stakeholders, and foremost, their workers.

In March, ICCR, along with Domini Impact Investments and the NYC Comptroller’s Office convened a coalition of 335 investors with nearly $9.5T in AUM to issue an Investor Statement on Coronavirus Response, including a 5-point plan urging companies to prioritize workers’ health, safety and wages during the crisis. The statement set the stage for subsequent engagements with companies in high-risk sectors.

At the same time, incidents of ongoing police brutality against Black people have led to widespread protests across the country calling for a re-envisioning of the social and economic systems that have perpetuated racial injustice. In June of 2020, ICCR and other investor members of the Racial Justice Investing (RJI) Coalition developed an Investor Statement of Solidarity and Call to Action to address systemic racism through their investments and work.

For a complete look at ICCR member successes during the 2020 proxy season, we invite you to download Catalyzing Corporate Change at this link.