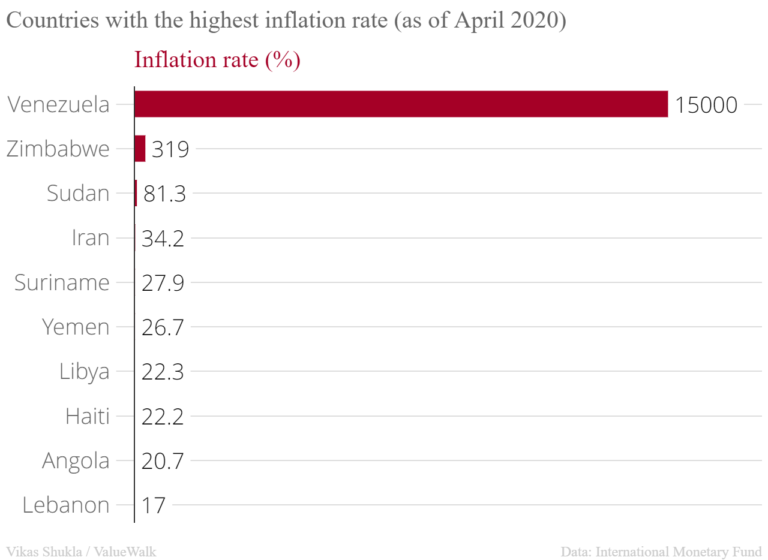 Inflation is the devil that eats away the value of your money over time. Economists define the term as the annual percentage change in consumer prices. It affects your savings, cost of living, mortgage payments, and overall financial situation. Most countries have stable and predictable inflation rates, which is considered healthy for an economy. But many third-world and politically unstable nations are struggling with sky-high inflation. Here we take a look at the top 10 countries with the highest inflation rate in the world.

Several developing nations don’t have a strong central bank or a robust financial system. So, those in power often play with the currency to meet their short-term objectives, ignoring their actions’ long-term impact. Almost all nations listed below have a volatile political and economic environment.

The ranking relies on data from the International Monetary Fund’s World Economic Outlook report. According to the report, the annual inflation in the US was just 0.6% while the global inflation stood at 3%. Governments, businesses, and central banks use the inflation data to gauge a country’s economy’s health.

When inflation runs high – such as in Zimbabwe and Venezuela – it becomes difficult for consumers to budget their expenditure. Businesses struggle to set the right price for their products, and many times the Government currency collapses.

The methodology is always a concern when putting together a list such as this one. Nations that have hyperinflation are usually more unstable, and collecting the data becomes complicated. For example, while the IMF does not have Sierra Leone in the top ten, the nation goods grew in price by 15 percent in 0219. If those numbers were a bit higher, Sierra Leone might come ahead of places like Lebanon.

According to the World Economic Outlook, Lebanon’s inflation rate is 17%. It rose to as high as 46.5% in April. Skyrocketing inflation has led to mass protests as people are left hungry and desperate. The Lebanese government has defaulted on its debt, and its forex reserves have fallen to critical levels.

The African country has witnessed a Civil War, armed conflicts, political instability, and extreme poverty. But its economic conditions have improved since it achieved political stability in 2002. According to the IMF, Angola’s inflation rate will rise further to 22.3% in 2021.

Haiti’s inflation rate has jumped from 17.3% in 2019 to 22.2% this year. The country suffered a devastating earthquake in 2010, which killed more than 200,000 people and left more than 1.3 million people displaced in Haiti. The economy of Haiti still hasn’t fully recovered as a result of the disaster.

Libya’s inflation rate went up from just 4.6% in 2019 to 22.3% this year. It will cool down a bit to 15.1% next year. Oil production in the war-torn country has come to a halt. Libya hasn’t witnessed peace since the NATO-led uprising that toppled Muammar Gaddafi almost a decade ago.

Yemen is another war-torn country trying to keep the economy afloat amid the military conflict and the COVID-19 pandemic. International humanitarian aid has also been drying up. The armed conflict between Saudi-backed rulers and Houthi rebels has displaced millions of people. Yemen’s inflation rate will drop from 26.7% in 2020 to 5% next year.

The South American country’s GDP has declined a whopping 26% from its 2014 peak. Under President Desi Bouterse, Suriname has witnessed rising foreign debt and one of the highest inflation rates. President Desi Bouterse’s son has been sentenced to 16 years in prison for helping the Lebanese militant group Hezbollah set up a branch in Suriname.

The Iranian economy has been struggling for years, primarily due to the US’s economic sanctions. The Central Bank of Iran aims to reduce the inflation rate to 22% by the end of this year. An estimated 45 million people in the country are struggling to put food on the table as food staples continue to skyrocket. The IMF projects the rate in Iran to be 33.5% in 2021.

Sudan has been struggling with some of the high inflation rates in the world. The African nation’s cost of products jumped from 51% in 2019 to 81.3% this year. It was as high as 114% in May 2020. The IMF estimates its increase in costs to be 91.1% in 2021. Political instability, armed conflicts with South Sudan, and deadly clashes have crippled the Sudanese country.

Zimbabwe has a price hike of 319%. In 2008, it recorded an even larger growth of 89.7 sextillion percent hyperinflation! The country was publishing 100 billion dollar bills. The current levels had raised concerns that the African nation could go back to hyperinflation days seen during the previous crisis when it was the highest in the world. Essential items remain scarce, and the prices have been rising at alarming rates.

What is the inflation rate in Dubai?

In 2019, there was deflation in the United Arab Emirates (UAE) of 1.93%; with projections of further downward pressure of one percent in 2020. The UAE has been able to control its currency since the high inflation of 12.27% in 2008.

Which country has the lowest inflation rate?

Eritrea has the lowest rate of any country, according to recent statistics. The country has deflation of a staggering 16.37% in 2020 as business was forced to cut prices.

How does China control inflation?

China’s government has a tight lid on its businesses and banks, which help to control inflation. China’s Central Bank also has a firm grip on its currency, which contains the cost of imports and exports.

What are the signs of high inflation rates?

Rising stock costs, lower fixed-rate bank loans, with rising wages, lower production are usually a sign of high or hyperinflation on its way.

Does unemployment cause inflation?

When a business lays off workers and unemployment rises inflation decreases as workers can purchase products. The Philips Curve shows that there is an inverse correlation between unemployment and inflation.

Argentina experiences frequent monetary crises. Argentina seems to be in the world news frequently over default and other fiscal issues. Other nations such as Liberia which have gained independence hundreds of years ago have been no exception. Liberia had costs rise 27 percent in 2019. The world has not seen the end of hyperinflation, but hopefully one day we will.