In some instances, how we are raised can factor into who we will be as adults. If our parents were compassionate and loving, there’s a good chance their children will be the same way. We learn through other people. But does the same go for learning financial habits? Can people overcome and learn better practices than what they saw from their parents? In a new study, Personal Capital surveyed more than 1,000 adults about their financial upbringing and where they are today to understand how our family can shape our financial standings and our capacity to do better than our parents did. 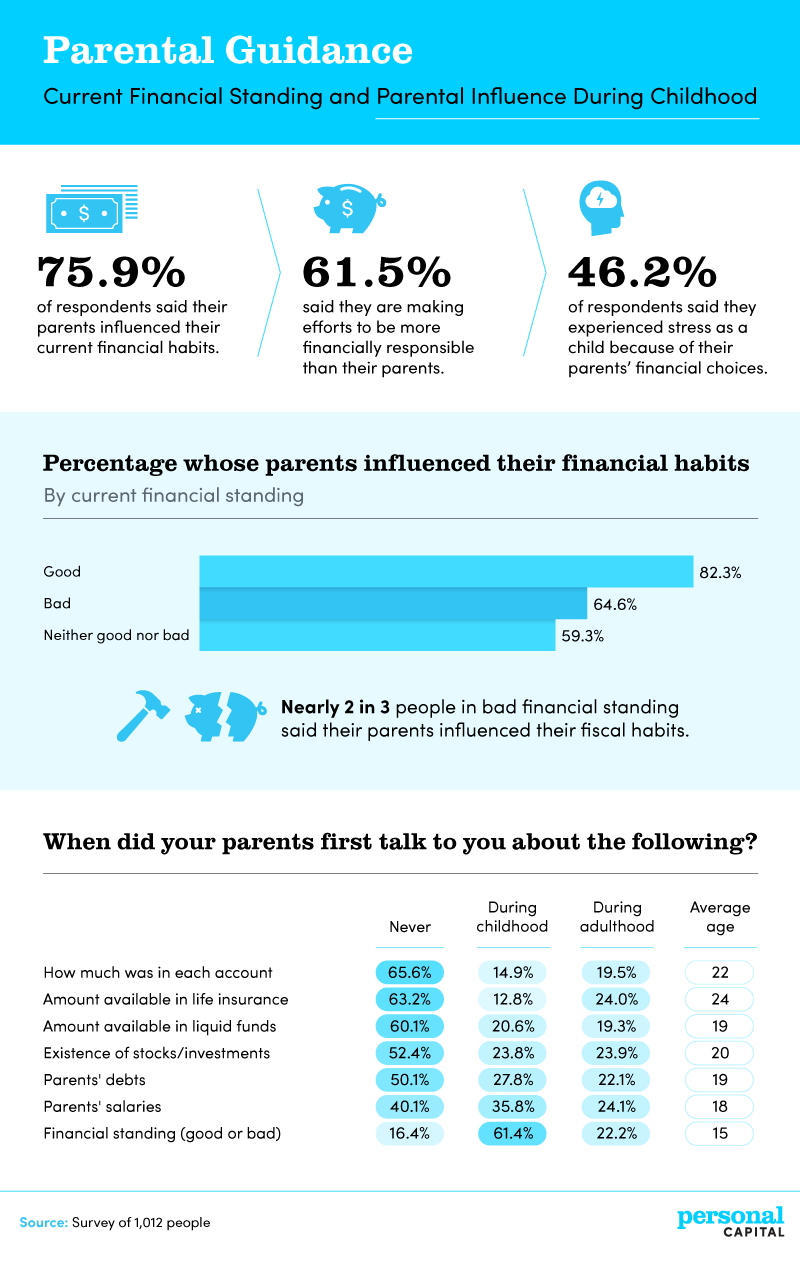 More than three-quarters of the people surveyed said their parents influenced their current financial habits. But not all of the respondents reported their learned patterns being a good thing. More than 3 in 5 people said they are making efforts to be more financially responsible than their parents. Nearly half (46.2%) experienced stress as a child because of their parents’ financial choices.

The people surveyed reported that their parents generally waited until they were adults before going into detail about financials. The earliest age parents would talk to their kids about money was 15 years old, and they would teach their children about what good or bad financial standing means. But by age 18, children generally knew how much money their parents made. Parents usually waited the longest to discuss life insurance with their kids, waiting until 24 years of age, on average. 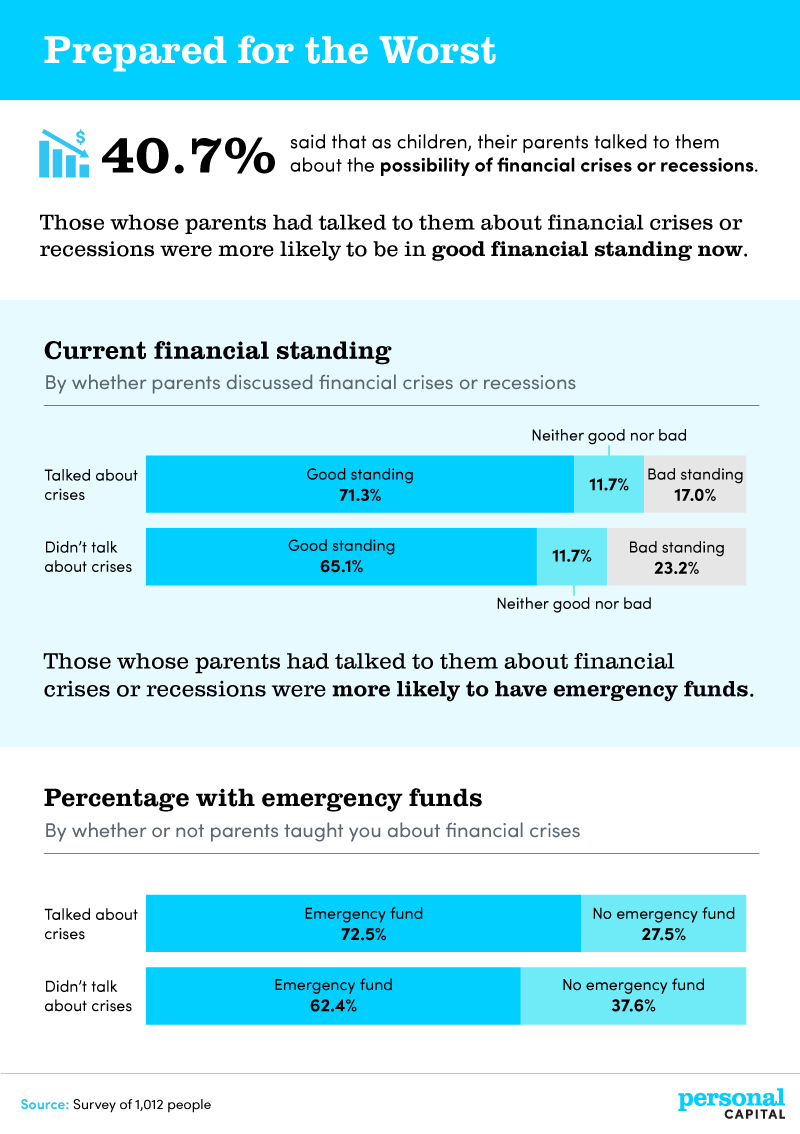 Sometimes it’s better to be overprepared than underprepared, and that goes for financial planning as well. More than 2 in 5 respondents said their parents discussed the possibility of financial crises or recessions with them as children.

The study revealed that those whose parents had talked to them about financial crises or recessions (71.3%) were more likely to be in good current financial standing than those whose parents did not have this discussion (65.1%). Also, the children of parents who did have this conversation were more likely to have emergency funds on hand than those who did not – 72.5% compared to 62.4%, respectively. Only 27.5% of people who talked about financial preparedness did not have a rainy-day fund. Conversely, 37.6% who avoided this talk didn’t have money saved. 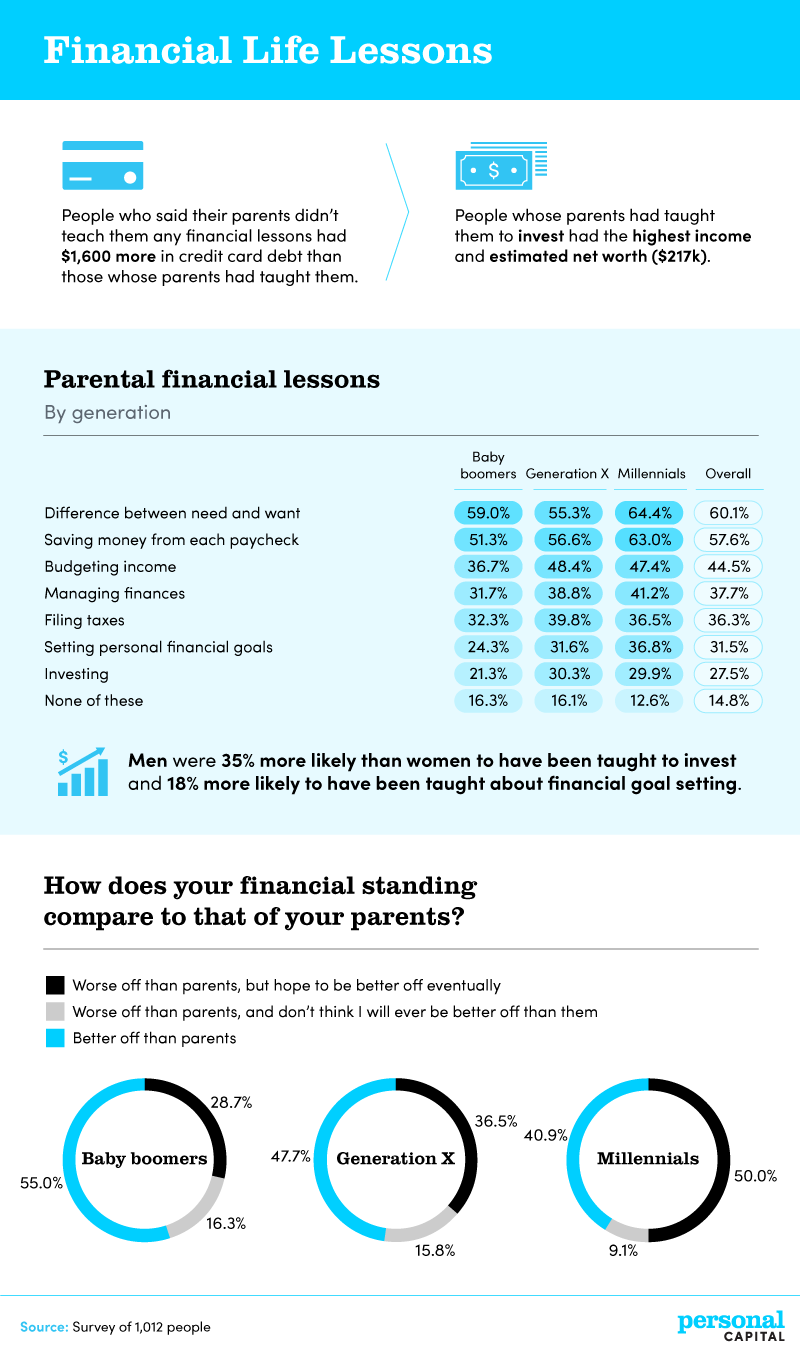 When the data was broken down by generation, some interesting results arose. While baby boomers (59%) were more likely to learn from their parents the difference between a need and a want than Generation X (55.3%), they ranked last in every other category assessed, such as saving money from each paycheck and making a budget.

Millennials were most likely to have learned the difference between a need and a want (64.4%), how to save money from each paycheck (63%), how to manage finances (41.2%), and how to set personal financial goals (36.8%). Parents of Generation X taught them about budgeting income (48.4%), filing taxes (39.8%), and investing (30.3%) more than any other generation. Men were 35% more likely than women to be taught to invest, and 18% more likely to have been informed about financial goal setting. 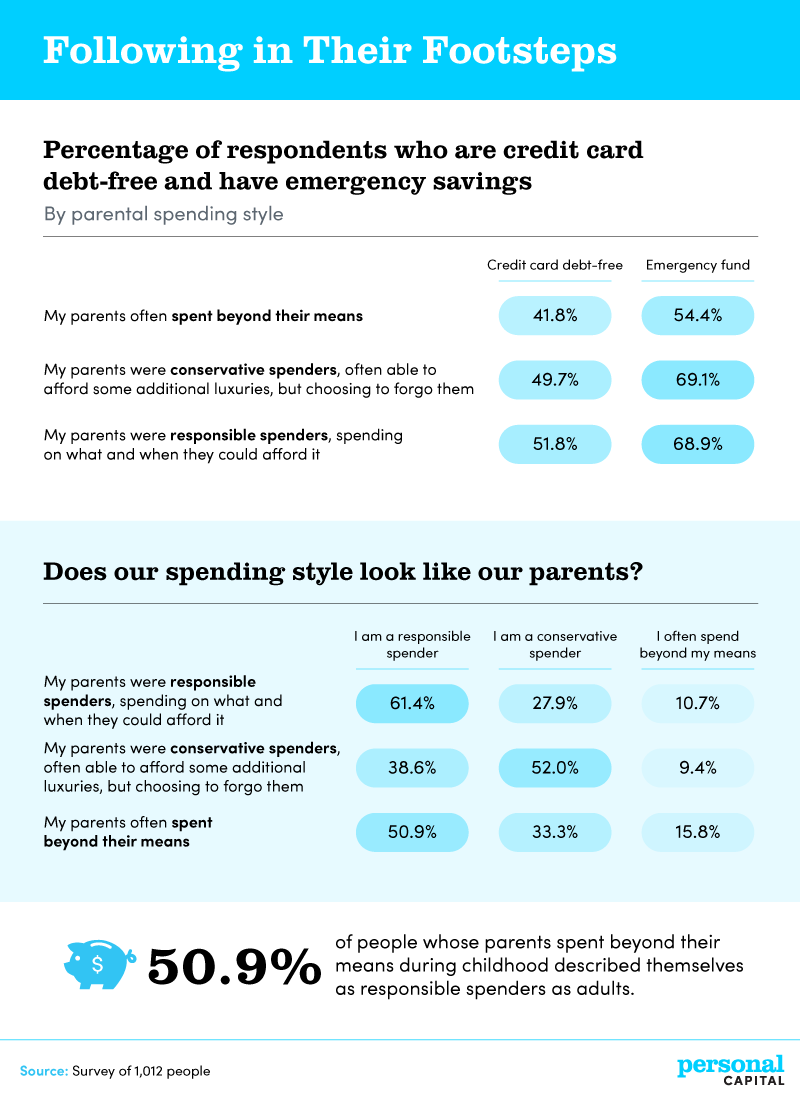 Do people spend money differently than their parents? According to the study, it looks like many adults learned from their parents’ financial faux pas. Of the kids whose parents spent beyond their means, 54.4% have an emergency account, and 41.8% have no credit card debt. The set of adults whose parents were conservative spenders were the most likely to have extra cash in case of emergencies.

While every person is different, it seems like people try to avoid the mistakes their parents made. Whether their parents bought unnecessary items or spent beyond their means, children seemed to notice and avoid those mistakes as adults. Everyone can learn how to manage money, even if they didn’t have the best examples growing up.