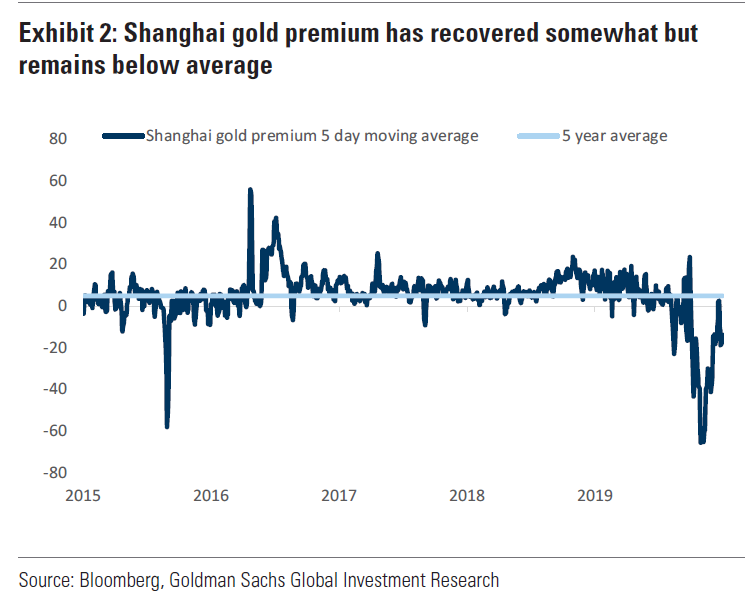 Gold prices climbed to a one-month high today as analysts at Goldman Sachs say investment demand should remain strong, even after the economy starts to emerge from its recession. They expect the rally to continue on fears about debasement and a weaker U.S. dollar.

Goldman analyst Mikhail Sprogis noted that gold prices struggled to find a direction since the March rally from the Federal Reserve's QE announcement. He said gold was torn between a major negative wealth shock to emerging market consumers and central bank demand and a jump in fear-driven investment demand in developed markets.

He noted that the COVID-19 shock to emerging market consumer demand this year has been significant as gold imports in India plummeted 99% in April and May. Additionally, the Russian central bank stopped buying gold when oil prices collapsed. He added that the Chinese gold premium has recovered from recent lows, but it remains lower than its historical average.

He added that gold ETFs capture about half of the inflows to physical investment demand. That implies investment demand for gold in developed markets could be up by as much as 1,000 tons. That more than offsets the decline of 700 tons in emerging market consumer demand.

Sprogis said the unstable environment caused some to worry that as risk-on sentiment improved and developed markets emerge from their lockdowns, investment demand for gold will moderate. In such a scenario, fear-driven demand would decline while wealth demand continues to struggle in emerging markets.

However, the number of COVID-19 cases has begun rising again, which has resulted in a fresh surge in fear-driven investment demand for gold, boosting prices. Sprogis also said that when the market starts to recover, gold investment demand usually grows into the early stage of the economic recovery. He said that growth is driven by ongoing debasement concerns and lower real rates. 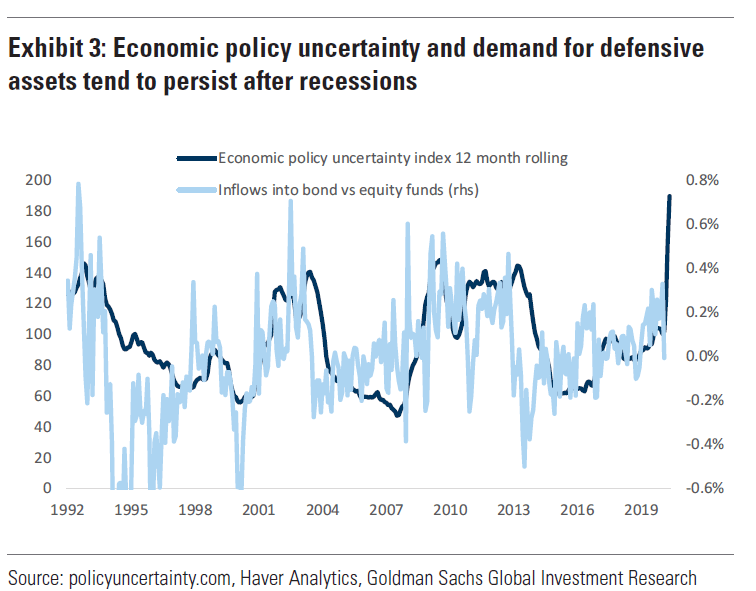 In fact, he said after the Global Financial Crisis, uncertainty in economic policies and cross-asset correlations remained high until 2013. 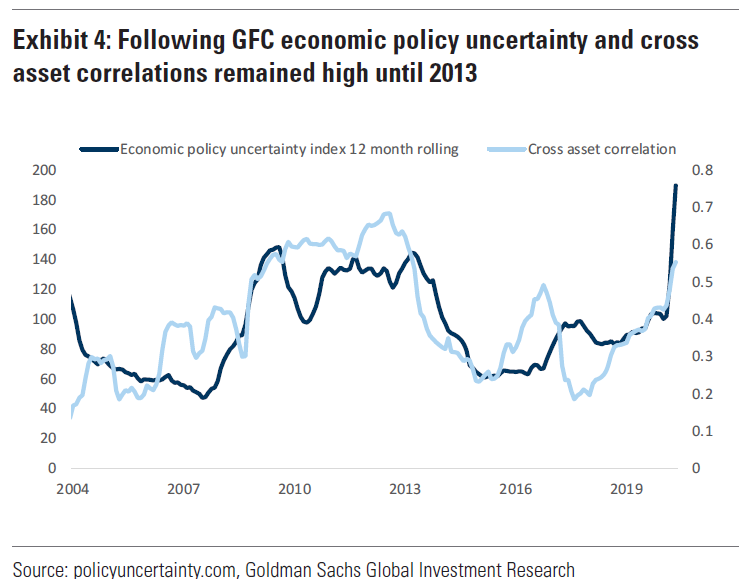 The Goldman Sachs analyst also emphasized that the weakness in consumer demand in emerging markets is less of a concern because it is partially driven by the higher gold prices. He said price-sensitive retail buyers are crowded out by strong investment demand for gold in developed markets. 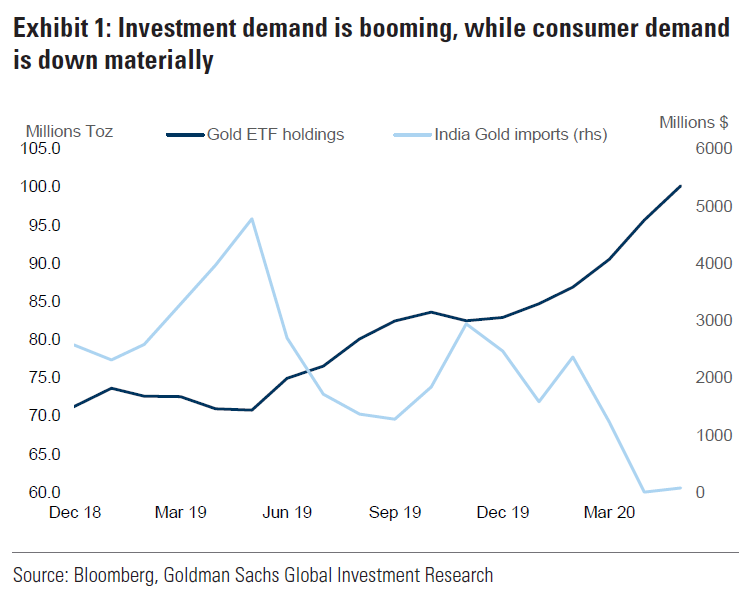 He estimates that fear-driven investment demand for gold has driven prices 18% higher, while the wealth drag has amounted to about an 8% weight on prices. Thus, he said he net effect is about 10%, which is roughly in line with the 13% gold prices have increased year to date.

Sprogis expects gold prices to follow a path similar to what they did between 2008 and 2013. 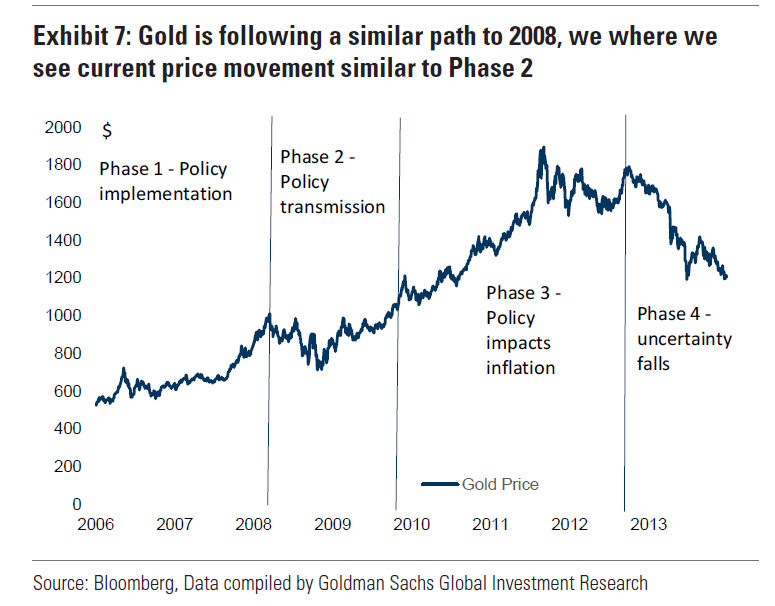 He explained that after the Global Financial Crisis, gold prices jumped initially as nominal rates fell and quantitative easing started in November 2008. Gold prices were range-bound through the first half of 2009 as policies took hold, although there were some brief corrections amid risk-on min-rotations out of defensive assets. 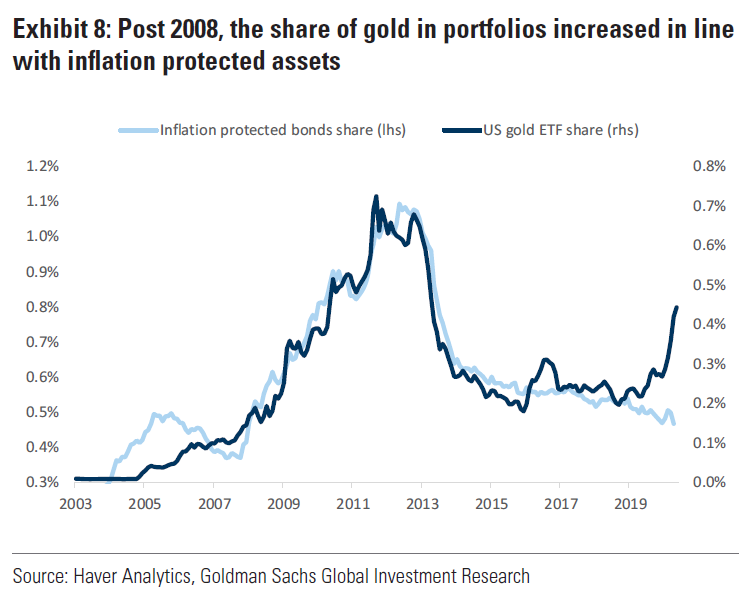 He noted that economic uncertainty continued for several years after the recession, and investment demand for gold will probably keep rising into the recovery stage of the business cycle. He said it wasn't until policy and economic uncertainty declined that gold prices fell after the Global Financial Crisis.