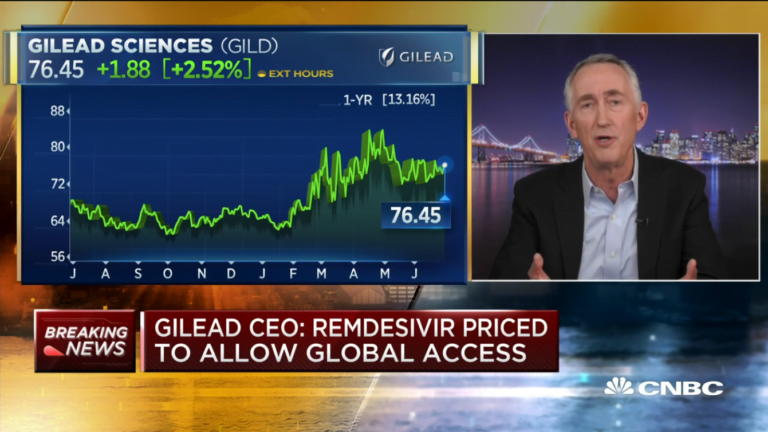 BECKY QUICK: Welcome back everybody, Gilead setting the price of its coronavirus drug, Remdesivir, this morning. Meg Tirrell joins us right now she has a very special guest, Meg.

MEG TIRRELL: Thanks Becky and that special guest is Daniel O’Day, the CEO of Gilead. Dan, thanks for being here this morning. This is a very important moment both for Gilead and the drug industry as a whole. You know, one industry publication writing this is a moment that could define the conversation around the pharmaceutical industry's reputation for years to come. You set this price, basically in line I think with what a lot of people expected. And you said it's well below the value the drug brings, but it's 30% higher to U.S. insurers, than to government insures around the world, in developed countries. Tell us about how you set this price.

DANIEL O’DAY: Thanks, Meg, and you're right. This is a very important decision for Gilead, it's something obviously we've given considerable thought to, and at the center of all that thinking whether it was how fast we put the clinical trials together, the decade long investment in antivirals, the donation program of our medicine to get patients access to the medicine early, the same focus went into the price. And although this medicine adds significant value to the healthcare system by reducing the hospital days, we decided to price this in this very extraordinary time in a unique way. We priced it at the value – excuse me at the price that allows for access across the developed world. And what we've done is we have one price for all governments across the development world, based upon the lowest purchasing power of the developed world countries and we provided that price to all governments around the world. And that's important I think. It's our responsibility and we feel it's the right thing to do.

O’DAY: Right, so for everybody's knowledge, for every medicine in the United States there are always two prices. There's a government price and then there's a price for private insurers, that's part of the system in the United States which allows for required and expected discounts to the government off of every medicine accordingly. Well, I want to assure you Meg, is that at both of those prices, we focused on making sure that all patients would have access.

TIRRELL: I just want to focus on that idea that there are two different prices a little bit, because you're saying that Gilead needed to take a different approach during a pandemic to pricing a medicine, but did the middlemen, the insurers, the folks that are benefiting from that difference between the net price and the gross price, they don't see the pandemic as a time when they need to be thinking differently about drug pricing?

O’DAY: I think the community at large is definitely coming together to think about how to make sure that patients with COVID in the hospital system are well covered. And that's true from the government programs to the way the private insurers have approached this to the way the CARES program is there for the uninsured patient population. So the way that the research based pharmaceutical industry has programs to make sure that if anybody needs support for their medicines, they receive it.

TIRRELL: I want to ask you also about supply. This is a difficult medicine to manufacturer and you've detailed how the company is working hard to increase the supply of it. Now you say you expect to have 2 million treatment courses by the end of the year. HHS is now saying that they expect to get 100% of your production of the drug for July. 90% in August. 90% in September. Does the rest of the world get access to this medicine?

O’DAY: Well once again Meg I want to really thank the colleagues that I had the privilege of working with at Gilead that from the moment that we knew that this medicine may be effective in COVID-19, we begin to ramp up a very complicated supply chain which used to take 12 months from start to finish. And now as we enter into the second half of the year, we've reduced that down to around six months. What that means is that as we go into the second half of the year, we have kind of an exponential increase in supply.

Particularly starting in September, October, November and December, where of the 2 million treatment courses that cumulatively that we expect to have by the end of the year, you know, more than half of those will be available starting from September on. So, in the next several months, where we have the greatest need in the developed world where the medicine is currently approved is here in the United States.

So it makes sense to put a large portion of our supply to work for U.S. patients right now. And as we go into September and beyond, and we see where this disease goes in the developed world, we'll be prepared with the supply that allows us to make sure that countries have what they need.

TIRRELL: And I want to ask you also about the invest – oh sorry, Andrew. Go ahead.

TIRRELL: Okay, Dan, I just wanted to ask you about whether you expect to make a profit on Remdesivir. You've said Gilead is expecting to spend up to a billion dollars doing all of this investment in manufacturing and development. Will you make a profit this year on the drug?

O’DAY: Well, Meg, that's a good question. I mean at the end of the day, we're well aware of our dual responsibility here, which is number one – to price it for access. We really wanted to make sure that immediately when countries have approval for this medicine that price in no way got in the way of patients receiving the medicine, which is why we priced it at a level for the –  if you like the countries with the least purchasing power and gave that to every price to take away those government price discussions that exist accordingly.

And at the same time, we understand that we're at the beginning of our investment in Remdesivir. As you know, based upon the three gold standard clinical trials, this is showing a significant effect in hospital patients, but we want to continue to see how we can increase that effect.

By combining this with other therapeutics, by bringing it earlier in the disease, and now we're just going to be beginning our studies on the inhaled version of this medicine so that perhaps we can get it outside the hospital. So, we're well aware of our total responsibility here in terms of our ability to both invest for access and continue to invest accordingly for the future of this medicine pandemic.

TIRRELL: All right, Dan, we really appreciate your time. Thanks for being with us.

O’DAY: Thank you very much, Meg.