With COVID-19 lockdowns, companies are heavily relying on government schemes to support their business: 7 out of 10 UK firms have applied to the furlough scheme 1 in which the government pays for 80% of employees’ salaries (up to £2,500) while they are not working.

To get a clearer picture on how different industries are faring during this crisis, we surveyed employees across the UK and asked them whether they had been furloughed or not.

Results show that employees in high paying jobs are very unlikely to have been furloughed, while those in lower paying positions face a much higher risk. They also show significant differences across sectors, with some industries continuing to employ 99% of their staff while others have furloughed half of their workforce.

Low-paid employees are being furloughed the most:

Companies are mostly relying on government support for the salary of low-paid staff: 44% of those earning less than £25,000 per year have been furloughed, against only 2% of those earning more than £100,000. The difference could be a reflection of how different industries are impacted by the current crisis: highly paid employees are likely to be working at financial firms or tech companies, which have barely relied on the furlough scheme (see next chart), while a significant proportion of low-paid jobs are in industries like construction or tourism, which are among the most severely hit.

Why firms are not furloughing their highest paid employees:

With the cap of the furlough support scheme set at £2,500 per month, employees earning £100,000 per year (£5,860 per month) would see their monthly pay check decrease by at least £3,360 when furloughed. If firms decided not to top-up these salaries, this would result in resentful employees at risk of leaving the company when given the opportunity. If companies do top-up the employee's salary, they would have to pay these £3,360 out of their pocket while their employee would not be able to work. For these reasons, most firms prefer to keep paying their highest-earners' full salaries and have them working, even in a downturn, rather than furloughing them. 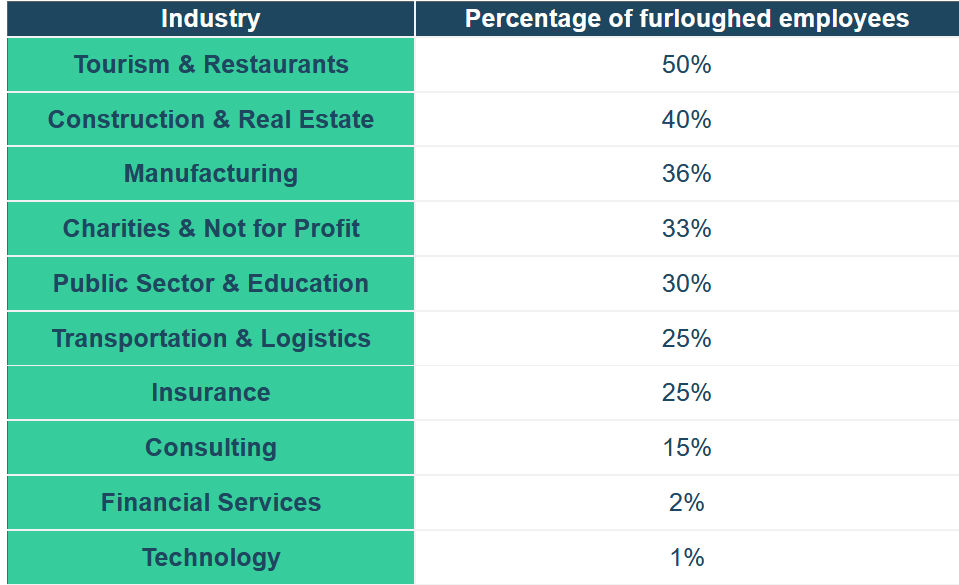 With just 1% of their employees being furloughed, tech firms are barely relying on the scheme to pursue their activity. Many of the bigger tech companies have seen a substantial increase in the demand for their services during the crisis, while smaller firms had already been experimenting with remote working for several years, making it easier for them to transition to a fully remote workplace.

With 33% of its employees on furlough, the not-for-profit industry appears to be needing the government's support more than most sectors. Whilst charities are currently much needed, many of them have been forced to cut operating costs as the volume of individual monetary contributions has dwindled in the last few months 2.

Thomas Drewry, co-founder of Emolument said: "Whilst the government scheme seems to be a lifeline for many firms, its broad use in some sectors raises questions regarding the survival of companies once support is withdrawn. When we asked furloughed employees whether they expected to get their job back, 36% of them answered 'No'. The end of the furlough scheme in October is undoubtedly a dreadful perspective for these employees, many of whom are low earners in industries at risk of collapsing."