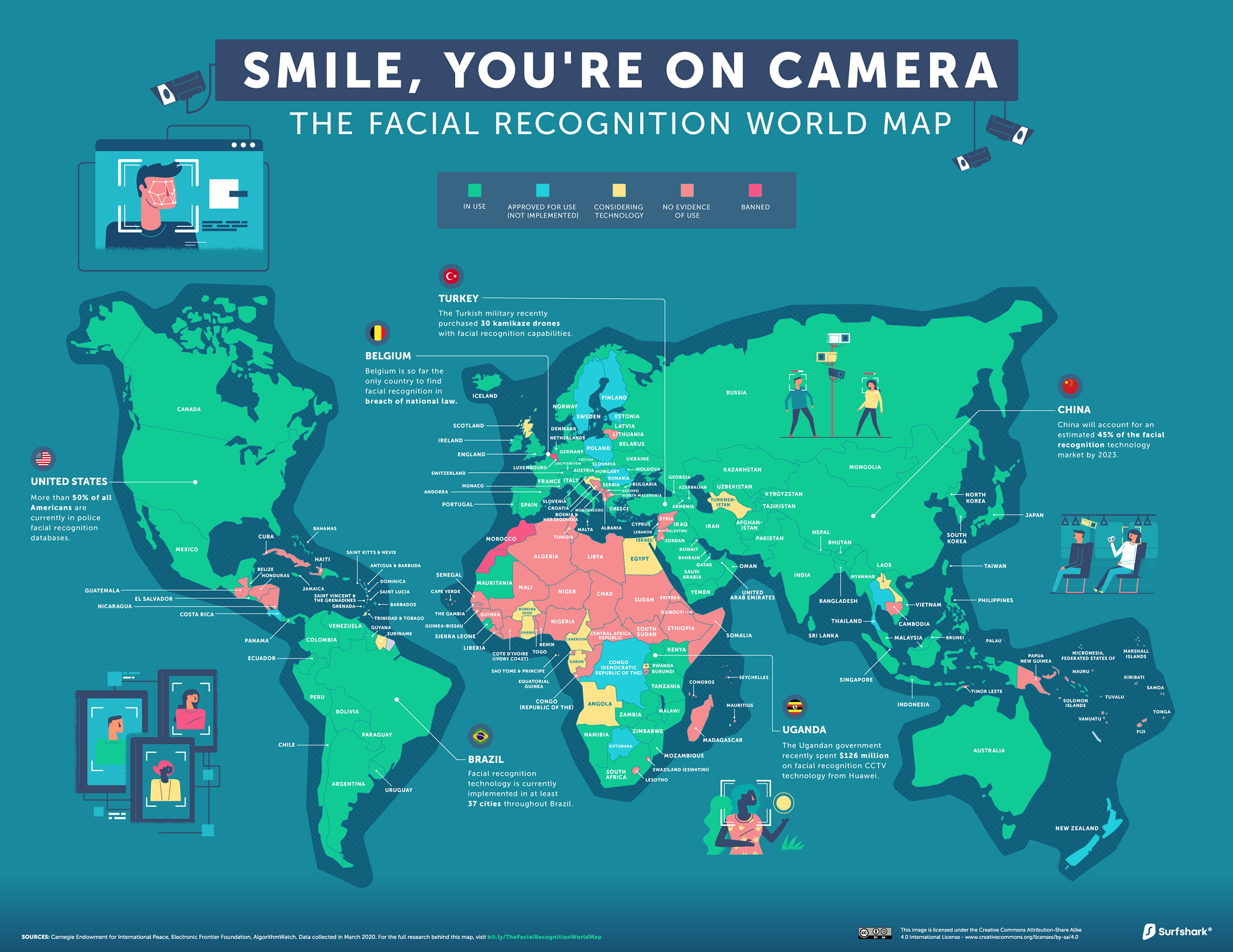 Facial recognition technology has mushroomed around the world in the past 10 years, and there are currently 109 countries either using, or who have approved the use of, computer programmes that use biometric data to identify human faces for surveillance purposes.

Those arguing for the use of facial recognition technology highlight their positive potential, from identifying criminals and deterring future crimes, to rescuing lost or vulnerable people. However, there are also strong arguments to suggest that widespread surveillance technology may infringe on basic liberties and rights of privacy.

To engage with the global debate on the ethics of using facial recognition technology, the digital security experts at Surfshark compiled data on 194 countries to see where the technology is in use, approved for use (not implemented), considering technology, banned, or no evidence of use.

This is the state of surveillance technology around the world.

While the use of facial recognition technology has courted widespread controversy since its inception, only two countries in Europe (Belgium and Luxembourg) have officially banned its use. Meanwhile, Russia has reportedly been using facial recognition to monitor whether people are following Coronavirus quarantine rules, and since its introduction to the Czech Republic in 2018, the technology has led to at least 160 arrests.

Facial recognition technology is now being used in half of the countries across North America. In the United States, 50% of the population are documented in police databases, and the Department of Homeland Security has plans to use facial recognition scanning on 97% of all air travellers by 2023. Some US cities are resistant to this surveillance technology, however, with San Francisco banning it in May 2019 and other cities following suit.

In Panama’s Tocumen Airport, 30 people a day are identified by the technology as being wanted by the police. On a more humanitarian note, facial recognition helped in the search for people missing after Hurricane Dorian in the Bahamas.

In South America, facial recognition technology has been adopted by 92% of countries, the largest share of all the continents, and police are making active use of it. During Brazil’s 2019 Carnival festival there were 134 arrests using surveillance evidence from just 16 cameras. The technology also helped Brazilian police in catching Interpol’s most-wanted person on the continent.

The technology here is clearly proving very efficient. In Colombia’s El Dorado International Airport, the facial recognition can identify a user’s face in less than 2 seconds.

The Middle East and Central Asia has the second-largest share of facial recognition surveillance uptake in the world, with 76% of countries using the technology in a variety of novel ways. Surveillance on the West Bank is particularly heavy, as the Israeli government has set up 27 cross-points to monitor Palestinian people, while police in the UAE now have 50 pairs of ‘smart glasses’ that enable them to identify faces in a crowd.

In Kazakhstan the police are using the technology to track and identify wanted people as well, but are also trialling it as a replacement for tickets on public transport.

China is at the forefront of the boom in facial recognition technology, both in developing and adopting the systems, and distribution to at least 16 other countries outside of Southeast Asia. Within China, there is approximately one facial recognition surveillance camera for every 12 citizens.

Elsewhere, the technology is being adopted for business purposes, from casino security in Macau and shoplifting deterrents in Japan to age-verification for online pornography in Australia.

With only 20% of African countries using facial recognition technology, the continent currently has the smallest share of all the regions, although this is likely to change. At least 12 African countries have received or bought surveillance tools from China, sometimes in exchange for biometric data, and others are considering adopting the technology.

In the Kenyan capital, Nairobi, reports suggest that CCTV has resulted in a 46% decrease in crime in 2015. In Tanzania, meanwhile, a novel use of facial recognition technology has been attempts to track dogs that have been vaccinated from rabies.

Facial recognition technology continues to advance and spread globally. Biometric facial data on more than 1.5 billion adults is currently stored between China and the US alone, and the accuracy of technology has improved on average by 2,000% from 2014 to 2018.