On April 14, 2020, the Wall Street Journal reported that Tesla had approached its landlords to ask for rent relief in light of the Covid-19 crisis.  The timing, to say the least, was a bit odd.  On April 14, 2020 the stock ran up $77.17.  The following day, it ran up another $58.94 and is up $31.00 further as I write this. Over the course of the last seven trading days the stock has run up about 60%, it largest increase over a seven-day interval since 2013.   Such a surprising jump, particularly in the middle of an alleged “depression” and market crash, is worthy of further investigation.

To provide further detail, the graph plots the price (indexed to a starting point of 100) for the S&P 500, Tesla, Ford, and General Motors starting on February 27, 2020 when the impact of the Covid-19 was beginning to be recognized.  As the graph shows, all four stocks maintained their level, or even rose slightly, until early March when the collapse began in earnest. 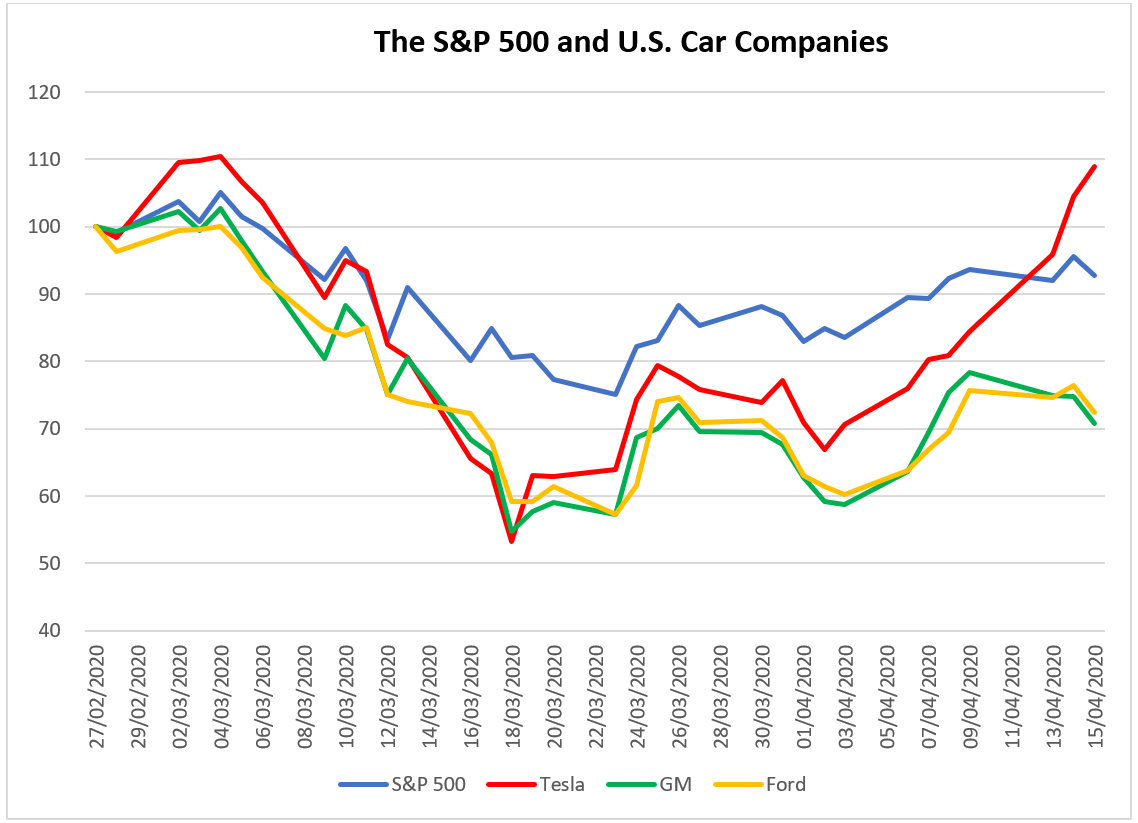 By March 20, all three automakers were down almost 50% and the S&P was down 25% from their levels on February 27.  Since then, all have recovered, but to vastly different extents.  As I write this today, April 15, 2020, Ford and GM are still down close 30%, compared to the S&P which has risen to within 7.2% of its February 27th level.  But the big surprise is that Tesla is almost 10% over its price on February 27.  The question is why?

It might seem like the obvious answer is “good news,” but the news has hardly been that good.  Since February 27:

A more likely explanation is that although times are tough for all automakers, Tesla is better positioned to take advantage when the lockdown ends.  The website Electrek put the matter this way, “The market and analysts are starting to look at what the auto market is going to look like post-pandemic, and many are starting to see that Tesla might be in a much better situation than other automakers.  In the short term, some automakers who are stuck in longer product cycles appear to be considering delaying some of their EV market launches while Tesla, which is seen as more nimble, seems to be moving forward with its plans.”  In all of this, Tesla is not being valued on its short-term earnings.  The fact that Tesla is likely to lose money in the first quarter of 2020 and is almost certain to lose money in the second quarter, is apparently irrelevant to the market - the value comes from market domination down the road.  In finance speak, Tesla is rich in growth options.

The same is not true for value companies of which Ford and GM are prime examples.  For the most part, they are valued on their ability to produce earnings now – an ability greatly compromised by Covid-19.  In the market’s view these companies are seen, perhaps unfairly, as having few growth options.  The gap between value and growth stocks was big before the virus crisis.  Many like investment experts, like Rob Arnott of Research Affiliates, felt it was too big.  Ironically, the crisis has served to widen the gap further.

These observations are not limited to Tesla. Amazon is another example. The stock has shattered its previous all-time pre-virus high of $2,173.  This may be justified.  As a result of the virus crisis people may be less willing to visit retail stores for some time.  In addition, the lockdown introduced many people to the company who previously were not active customers.  But you can make the same argument no matter what the current stock price for Amazon.  The simple fact is that despite all the company’s great characteristics, there must be a price at which Amazon becomes “too expensive.”  The problem is not only estimating that price but determining whether the market will pay attention to it.  The story is the same for many growth stocks that have nearly recovered, if not exceeded, their pre-virus levels.

In short, the recent behavior of the market has taken on an element of “here we go again” presenting investors with a Hobson’s choice.  Buy growth stocks at rarified prices, particularly relative to current circumstances, or buy value stocks, whose prices look cheap, but whose earnings outlook is bleak.  Of course, it is always possible to stay on the sideline and see what develops.  Warren Buffett is apparently taking this route.