Social distancing is the need of the hour, and it seems, people in the U.S. are following it fairly strictly. A recent report from Cowen, sort of confirms this as well. As per the report, foot traffic in the malls and retail stores around the U.S. has been dropping for some time due to coronavirus fears, and now, it is near a complete halt.

Investment firm Cowen, in a research note dated March 31, noted that the total retail foot traffic was down 97.6% for the week through March 27, compared to the same period last year. The week before that, the total traffic was down to 80.4%. 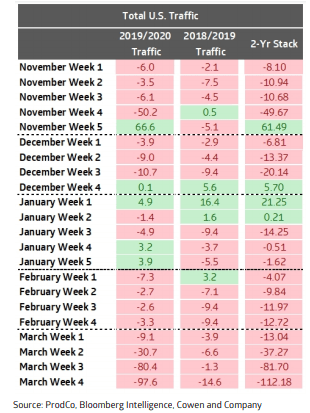 For the last week of March (week 5), Cowen analysts estimate coronavirus would continue to force people to stay indoors, with retail foot traffic dropping to -95% to -100%  year-over-year.

“We are forecasting March Week 5 U.S. Retail traffic to further deteriorate as widespread store closures remain in effect to combat the spread of COVID-19,” the report says.

Data from location-data provider Prodco Analytics also says a similar thing. As per the data, the visits to U.S. stores dropped by about 98% last week when compared to the same period last year. Further, the data shows that the retail foot traffic growth has been negative for the past eight weeks, i.e., when coronavirus started to spread out of China.

Several retailers have closed stores voluntarily to prevent the spread of the deadly virus. For instance, Simon Property Group, which is the biggest mall owner in the U.S., has already closed its malls. Another reason for the drop in traffic is that several cities with high retail traffic, such as New York, Los Angeles and San Francisco, have officially ordered the closedown of all businesses except for essentials.

Along with the total retail traffic, Cowen analysts also talked about the U.S. Apparel Traffic separately. As per the analysts, the apparel traffic dropped to -99.3% in March week 4, compared to -86.8% the previous week (ending 3/20/20). 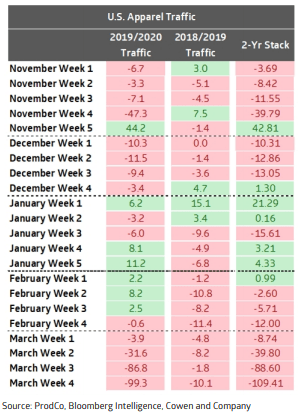 Cowen, in their report, also talked about the weather trend. The analysts noted that the U.S. was +1.2° warmer during March Week 4 compared to last year. This was +3.5° above normal during March Week 4. Talking of Precipitation, the analyst noted that it was 80% more that last year, and was 30% more than usual. Citing WTI (Weather Trends International), the report noted that week 4 was the “warmest in three years and the wettest in six.”

According to GlobalData Retail, the total store closures were over 200,000 as of March 30. The mass shutdown of the retail stores started in mid-March, when about 50,000 stores were closed across the U.S. in just over a week.

A few grocery stores and chains, such as Walmart, Target, and Costco are open, but shoppers are only visiting these stores to pick up necessities. Online sales of retailers are nowhere near enough to compensate for the loss in spending, which is now heavily directed towards necessities.

Several retailers, such as Macy’s, Gap, Kohl’s, JCPenney, Loft-owner Ascena and more, have already expressed intentions to furlough workers without pay. Bloomberg estimates that more than 600,000 workers have been furloughed due to the shutdown of the stores.

According to CNBC, Simon Property Group has furloughed about 30% of its workforce. Citing a source familiar with the situation, CNBC said that CEO David Simon won’t take his salary during the outbreak, while the salaries of upper-level managers would be reduced by up to 30%. As per Simon’s latest annual filing, the company had about 4,500 employees as of Dec. 31.

Luxury retailer Neiman Marcus also plans to furlough most of its about 14,000 workers, notes a report from Bloomberg. Kohl’s on Monday said that it would furlough about 85,000 employees. It has a workforce of about 122,000 employees.

Similarly, on Monday, Macy’s said that it has moved to the “absolute minimum workforce needed to maintain basic operations.” The company, which has about 130,000 workers, has furloughed the majority of its workforce.