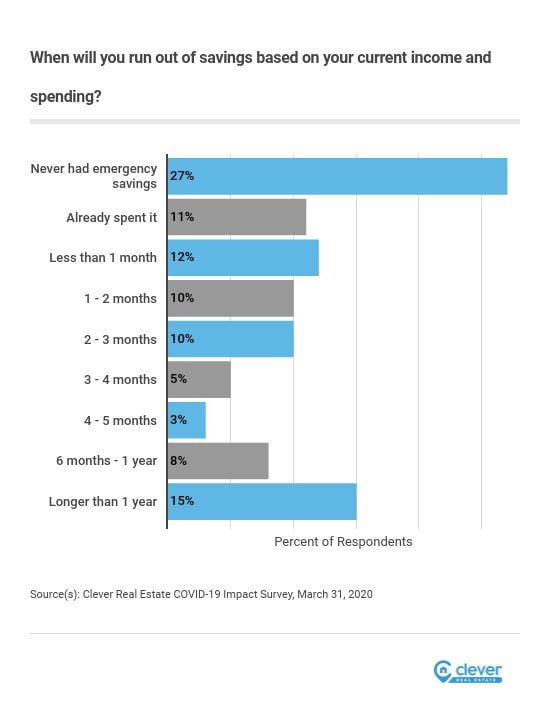 Since it first appeared in November 2019, the novel coronavirus has ravaged the world — infecting nearly two million people and killing well over 100,000 as of April 13, 2020. The virus has devastated healthcare systems, economies, and the jobs of millions of Americans. With the unemployment rate already nearing the 15% mark — the highest level since 1940 — and the likelihood it will skyrocket even higher, it may take years to recover.

According to previous research by Clever, Americans were already $14 trillion in debt before COVID-19 swept across the nation. To find out the effects of the pandemic on homeowners and renters, Clever surveyed 1000 Americans on March 31 to dig deeper into how consumers are impacted thus far.

Here are some of the key ways consumers in the U.S. are being impacted by COVID-19.

At risk of losing their home

One of the largest concerns on most homeowners minds right now is how they are going to pay bills — specifically their monthly mortgage payments. 50% of Americans reported their savings will run out by the end of April. Prior to the COVID-19 outbreak, 30% of homeowners had less than $1,000 in an emergency fund, with 22% reporting they didn’t have enough in savings to cover their mortgage payment for one month. 9% don’t think their savings would last three to six months.

Considering the effects of the virus are projected to last much longer than a single month, this could leave a large slice of homeowners at risk for missing their mortgage payment for several months if their hours are cut, they are furloughed, or they lose their job altogether.

As of March 31, 16% of homeowners have worked with lenders to reduce or suspend mortgage payments. But, 12% are already behind on their mortgage because of the effects of the coronavirus. More than a fourth of homeowners are worried about defaulting on their mortgages, which could lead to foreclosure and losing their home down the road. As evidenced by these numbers, just a short gap in pay could result in devastating circumstances for lots of homeowners.

Home sellers are pulling back

85% of those planning to sell their home over the next 12 months have changed their plans as a result of the virus — either by removing the “for sale” sign from their front yard, lowering their asking price, or postponing their listing. There were 15% less active listings in March 2020 than March 2019. While this discrepancy can’t all be credited to the pandemic, it has undeniably had an impact. 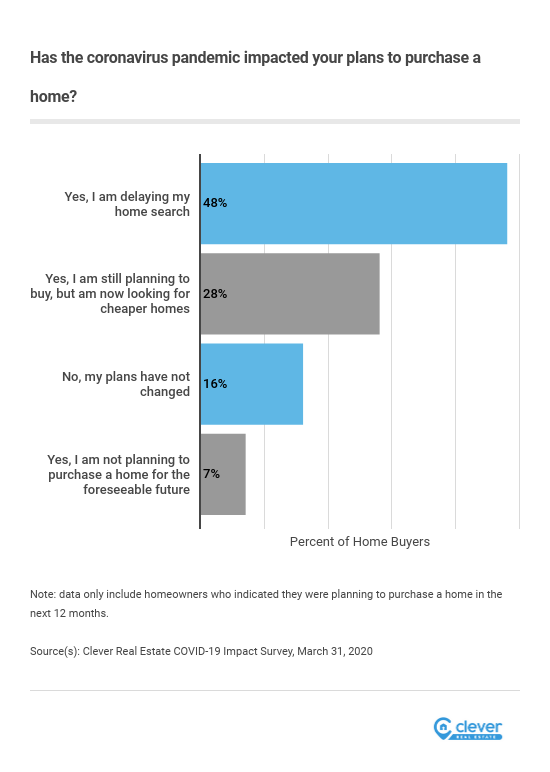 Those who do still plan to put their home on the market may do so out of necessity due to a job change. They’ll likely look for ways to save on their sale, either through flat-fee MLS services or searching for lower commission real estate agents. We may also see more for-sale-by-owner listings as homeowners try to eke out profits in a buyer-friendly market.

Home buyers are hesitant to buy

Uncertainty surrounding the future as a result of COVID-19 is causing more than 55% of would-be home buyers to either put off their purchase or stopped looking altogether. 28%  have continued their search but reduce the amount they are willing to spend and are now on the hunt for a bargain by making low ball offers.

Ultimately, the immediate future outlook for buyers will depend greatly on how the economy reacts to this major jolt to the system and how long Americans are out of work. The longer mandates like shelter-in-place and social distancing go on, the more of an impact it will have on potential buyers. Some may need time after businesses reopen to build up savings or down payments that were spent on necessities during the pandemic.

Tenants are struggling to pay rent

Homeowners aren’t the only ones struggling — and renter’s have even less in savings to ride out the storm. Almost half of renters surveyed had less than $500 saved for emergencies prior to the pandemic. Half also said they never had an emergency fund or have already spent it, leaving them worried about how they’ll pay rent in the near future.

While some protections — like a moratorium on evictions — are offered via the recently passed CARES Act, they generally only cover properties that carry a federal mortgage (think Fannie Mae, Freddie Mac, or Federal Housing Authority (FHA). This covers about 12% of single-family rental properties and about half of all multi-family properties. However, the protections aren’t simple — they’re laid out in a 350-page document — and can be tricky to apply. It may be difficult for a renter to know what type of mortgage their landlord holds and if the moratorium applies.

Some states are making their own mandates banning evictions for a certain period of time. However, this doesn’t help tenants from getting behind on payments, potentially racking up late fees, and facing eviction in the future. The good news is that some landlords may be able to apply for forbearance of their mortgage — a temporary postponement of their payments — and be able to more easily work with tenants on a suitable agreement for both parties.

Americans already living paycheck-to-paycheck didn’t have any extra savings and a quarter of them are already adding more debt to their plates as a result of COVID-19 and their loss of income. This is expected to continue in greater numbers as businesses remain closed, their reserves drop, and they face even greater potential to lay off or furlough employees in the coming months.

Outlook for the future

While the federal government has issued some stimulus checks to most Americans, these are one-time checks and may not go far for those out of work completely for several months. Even after the fears and shutdowns of the pandemic have long passed, Americans will feel the immense toll it has taken on their lives — and their livelihood.

Bank accounts will have been drained and Americans may be leery to make large purchases with the possibility the virus will return again as cooler weather returns in the fall — and with it, the fear of more jobs lost. Most consumers won’t be able to fully set aside their uncertainty until a viable vaccination has been developed and successfully implemented throughout a bulk of the population. Even then, American’s consumer habits may never be the same.