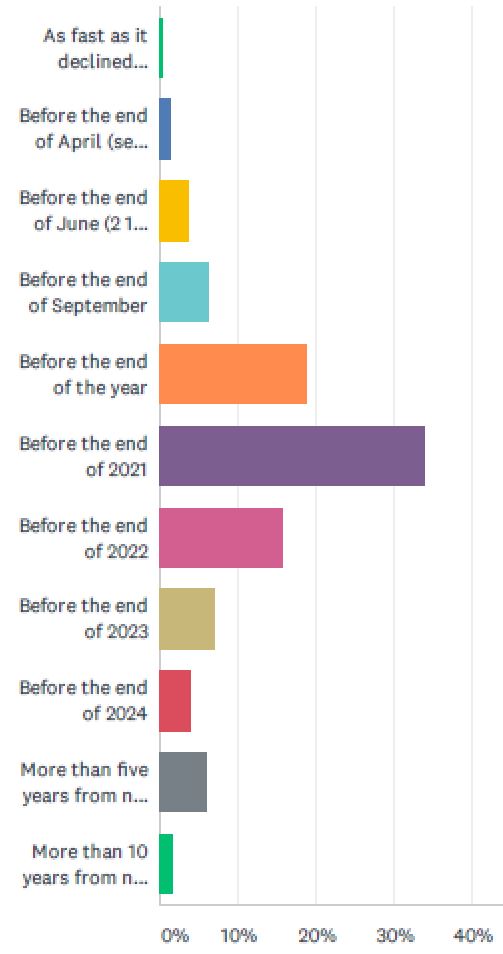 Whitney Tilson’s email to investors discussing that lower stock prices are good news; survey results of where the market bottoms and when it hits a new high; new survey on coronavirus cases and deaths in the U.S.; the bull and bear cases; Goldman Sachs note; support your local restaurants!

1) I know that the market decline has been painful for many people. You have my condolences... Losing money is no fun. I know what it feels like, having experienced – managing other peoples' money no less! – both the bursting of the Internet bubble (when the Nasdaq declined by 78%) and the housing bubble (when the S&P 500 fell 52%). And I was too early starting to put my cash to work in this decline as well.

But it's important for every investor to understand that stocks can be volatile, and that you should only have money in the markets if you can: a) handle the volatility so you don't panic and sell at the bottom... and b) have at least a three-year horizon (ideally much longer).

It's also important to understand that, for the vast majority of people, lower stock prices are good news. Warren Buffett explained why in his 1997 annual letter:

These questions, of course, answer themselves. But now for the final exam: If you expect to be a net saver during the next five years, should you hope for a higher or lower stock market during that period?

Many investors get this one wrong. Even though they are going to be net buyers of stocks for many years to come, they are elated when stock prices rise and depressed when they fall. In effect, they rejoice because prices have risen for the "hamburgers" they will soon be buying. This reaction makes no sense. Only those who will be sellers of equities in the near future should be happy at seeing stocks rise. Prospective purchasers should much prefer sinking prices.

Where The Market Bottoms And When It Hits A New High

2) Nearly 800 readers filled out the brief two-question survey I sent around last week (it's still open if you want to participate – just click here). The midpoint of the answers is that the S&P will drop roughly 15% – which would be around 2,100 – and wouldn't surpass its old high until sometime in 2021.

It will be interesting to see how accurate our collective wisdom is!

Coronavirus Cases And Deaths In The U.S.

3) Speaking of surveys, I've put together a new one to measure how bad you think the coronavirus crisis will get in the U.S.

I'd be grateful if you'd take 30 seconds to fill it out – you can do so here. I'll share the responses later this week.

The Bull And Bear Cases

4) Here is an excellent summary of the bull and bear arguments by my friend Doug Kass of Seabreeze Partners:

The Pros: Reasons to buy or start averaging in...

The Cons: Reasons not to buy or start averaging in...

5) Here are some additional bearish and bearish arguments for how the crisis will play out:

7) Bill Ackman of Pershing Square Capital Management has nailed exactly what would happen vis-à-vis the coronavirus crisis – and invested accordingly. That's why the net asset value ("NAV") of his publicly traded fund, Pershing Square Holdings, was up 10.6% in the first nine days of March – bringing his year-to-date return to 2.8%.

With exponential compounding, every day we postpone the shutdown costs thousands, and soon hundreds of thousands, and then millions of lives, and destroys the economy.

Mr. President, the only answer is to shut down the country for the next 30 days and close the borders. Tell all Americans that you are putting us on an extended Spring Break at home with family. Keep only essential services open. The government pays wages until we reopen.

Mr. President, the moment you send everyone home for Spring Break and close the borders, the infection rate will plummet, the stock market will soar, and the clouds will lift. We need your leadership now!

8) A bunch of people have sent me an e-mail that begins:

Just got off a Goldman Sachs Investee call where 1,500 companies dialed in. The key economic takeaways were:

70% of Germany will contract it (58M people). This is the next most relevant industrial economy to be [affected].

Peak-virus is expected over the next eight weeks, declining thereafter.

I sent it to a friend at Goldman Sachs (GS) who doesn't recognize it. But he did send me this note that Goldman's Investment Strategy Group published on Sunday night: From Room to Grow to Room to Fall.

9) Last but not least, I sent this e-mail out yesterday:

With restaurants choosing (or forced) to close their doors, a huge sector of our economy, which provides millions of jobs, is hurting badly.

Many of them will soon go bankrupt unless we step up and order takeout/delivery. Here's an article about it: Restaurants are pivoting to takeout and delivery. Will it be enough to survive?

Grubhub and Uber Eats are suspending the fees (of up to 30%) that they charge independent restaurants.

So, rather than sitting at home and cooking the mountain of food you've no doubt hoarded, support a local business instead!

P.S. If you live in NYC, I want to put in a special plug for Pascalou, a fabulous restaurant owned by our dear friend, Lottie Baglan, and her husband, Pascal, who's the chef. You can see the menu and order here. If you want to call in your order at (212) 534-7522, Lottie will probably pick up, so tell her you're a friend of mine!