ValueWalk
Home Economics The Tide Is Going Out 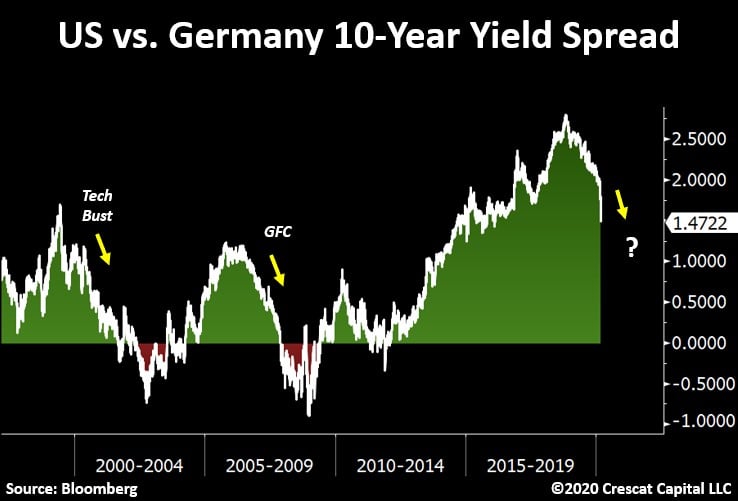 Crescat Capital’s commentary for the month of March 2020, titled, “The Tide Is Going Out”, discussing the signals of a looming bear market and recession.

The most overvalued stock market in US history finally climaxed in February. The popular delusion of this mania was that low interest rates and Fed liquidity would keep driving stock prices higher indefinitely. The market top was preordained based on an onslaught of deteriorating macro and fundamental indicators. These signals had been warning of a looming bear market and recession independent of any black swan. The record long economic expansion is now conclusively over in our analysis. Coronavirus was just the final nail in the coffin. The virus will hopefully be contained soon, but the process of reconciling extreme worldwide economic imbalances, including historic global credit to GDP, has only just begun. A regime change in market volatility is at hand. The tide of the incurable business cycle is going out. The world is about to discover who has been swimming naked.

The idea that central bank easing can prevent recessions is what created today’s asset bubbles in the first place. That fantasy is about to be shattered. Easy monetary policy gets most aggressive when an economic downturn is already in full swing. It’s an acknowledgment of a downturn not a means to pre-empt one. Central banks are in panic mode today. As we show in the chart below, the last several times that both the Fed and the Bank of Canada cut rates by at least 50 basis points in the same month, like they did last week, we were in the middle of the tech bust and global financial crisis. 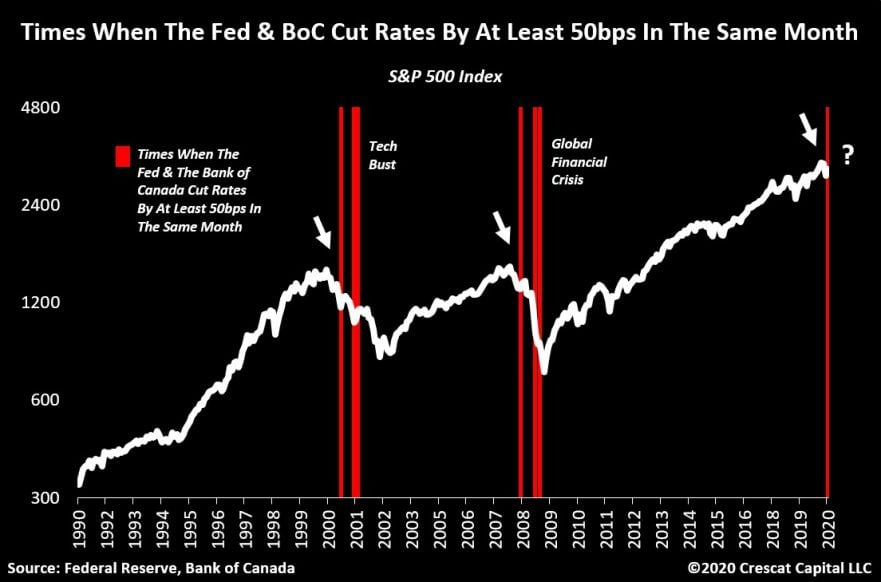 This time, it really is different. The market only just topped out, and it has done so at valuations twice as high as tech and housing bubble peaks based on median enterprise value to sales. The US equity market had become a true speculative euphoria. March 2020 is more akin to October 1929 in our analysis, and the unwind has just started.

Investors are finally waking up to the risks of an overdue downturn in the economy. The smart money has already sold in our view. But it is not too late to sell. Valuations are still insanely high. Unfortunately, too many investors will go down holding, because that is what they have been taught to do in this passive investing bubble. Many of these believers will likely be capitulating at progressively lower prices in a grinding bear market and recession. Such is not the end of the world. It is just the regular business cycle. But from such high starting valuations, the coming economic slump is likely to morph into a particularly relentless and brutal one. The record number of passive investors in stocks today should only make the equity crash and recession worse. Household savings and spending are likely to be crushed in self-reinforcing fashion to make this downturn one for the history books.

We are starting from almost two standard deviations above the long-term mean trend of the Dow Jones, just like in 1929 and 2000, as we show in the chart below. A mere reversion to the mean from the recent top is a 56% decline. We believe there is substantially more market downside ahead. To put it in perspective, the circled area in the chart shows that the correction so far is just a blip. We believe there is still tremendous opportunity ahead for tactical, global macro, and value-oriented investors to capitalize on this environment, especially through hedge funds that can be net short. 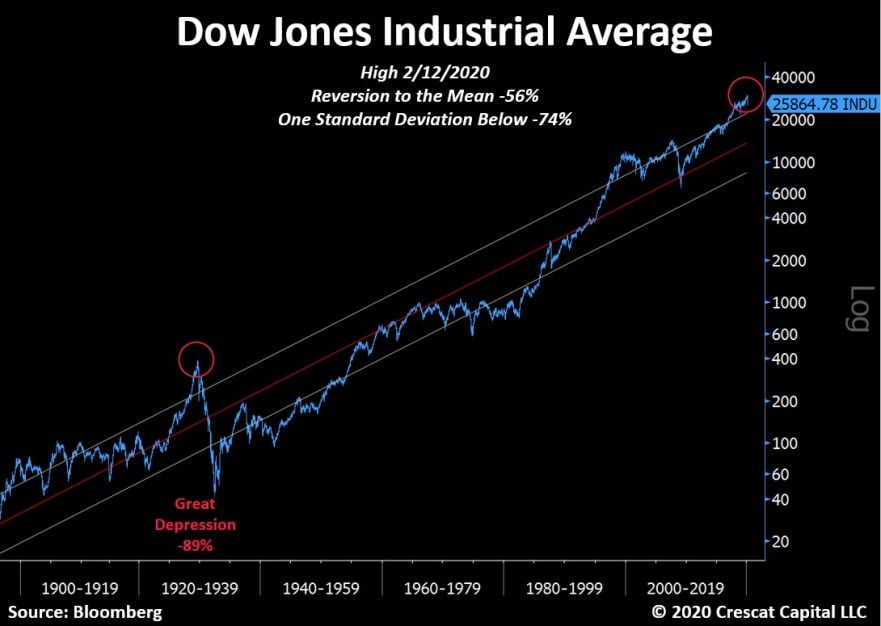 Crescat’s global macro hedge fund remains fully positioned to profit from what we consider to be the macro trade of the century. That trade is to be long precious metals securities in Chinese yuan terms and short the most overvalued equities in the world today. This combination is now breaking out as we show in the chart below. We believe it’s only just starting to unfold. 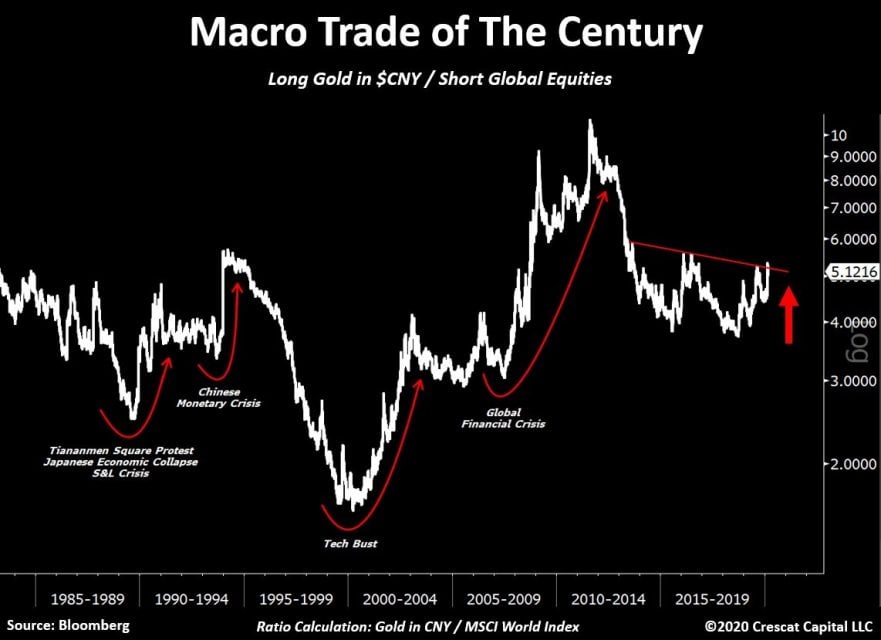 The global economy has been grinding to a halt and the only “V” shape turnaround we see in the near term is central banks’ balance sheets. Their assets have already started to explode. Many investors today think the Fed is ahead of the game by expanding its balance sheet to forestall a recession. But it only reminds us of the time prior to the global financial crisis when the European Central Bank (ECB) and Bank of Japan (BOJ) added over $400 billion from June 2007 to March 2008 directly ahead of the economic collapse.

Aside from new rounds of interest rate cuts globally, central banks are now in what we call a global synchronized debasement, panic money printing everywhere. The ECB, BOJ, RBA, BOC and the Fed have just added a combined $675 billion to their balance sheets in the last 15 days! In just one month, PBOC added $380 billion recently. 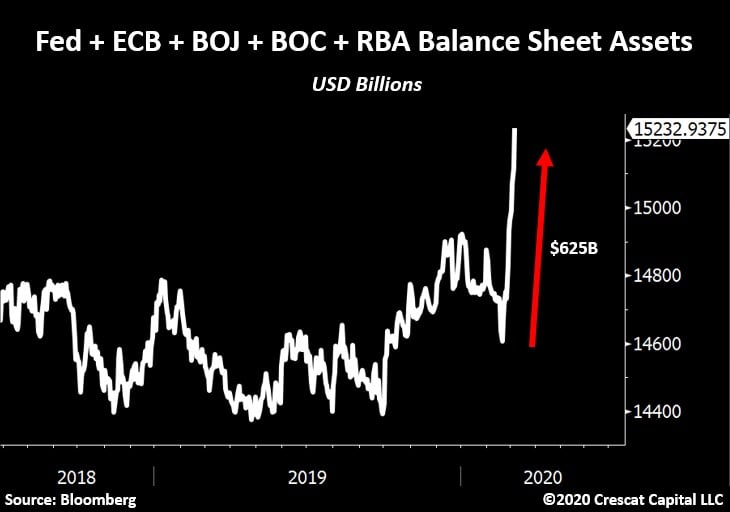 Our macro case for buying precious metals remains intact. The recent pullback in silver from short-term overbought levels gave us an opportunity to add. Similarly, investors threw the baby out with the bathwater with precious metals mining stocks in February. We were able to add to our positions in our hedge funds. These stocks have been recovering nicely in March. Gold itself has been holding up incredibly well in this stock market selloff. Meanwhile, with oil prices collapsing, we believe precious metals stocks could see significant improvements in their margins.

It’s remarkable to us how the entire Treasury curve is below inflation for the second time in history. The first time this happened was in late-2016, at the beginning of a tightening cycle. This time, central banks are easing. It’s the perfect storm for gold. The more the stock market falls, the more precious metals serve as an attractive beneficiary of all the central bank intervention. 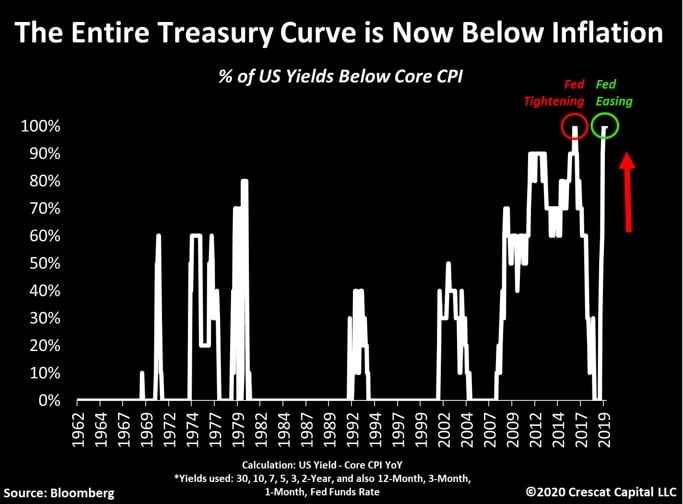 Public companies have never looked so fundamentally beleaguered at the same time as their valuations have been so stretched. Even prior to COVID-19 outbreak, US businesses were already shrinking their hiring plans as profits were contracting. We expect both earning and job openings to continue plunging as we show in the chart below. We believe the economic impacts from the virus spread will almost certainly weaken the labor market, which is the one part of the economy that has held up unexpectedly well until now. That combined with a decline in consumer confidence from recent peaks are just two more straws to break the camel’s back. 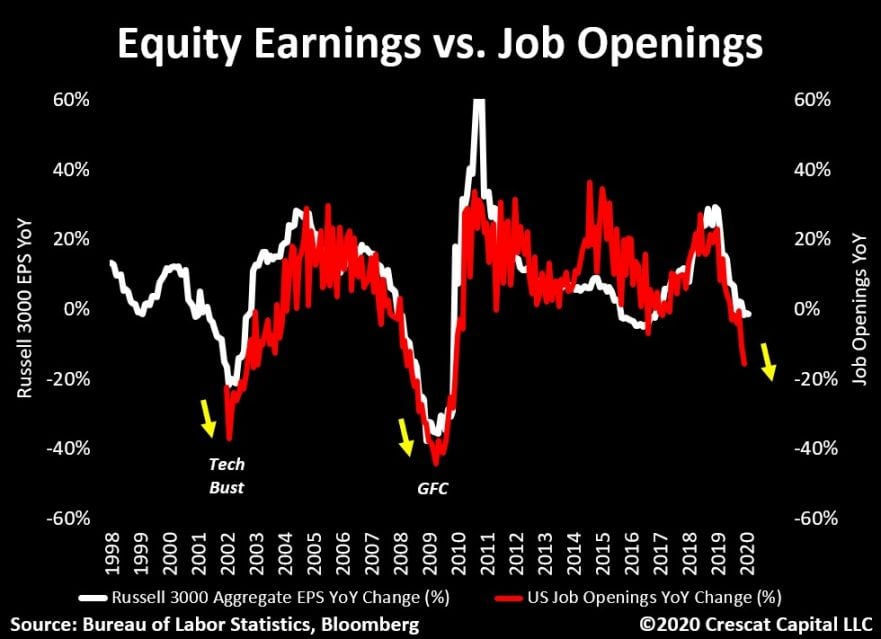 Another way to measure the complacency that led to this market and business cycle top is to look at the consumer confidence to misery index ratio. That has already started to roll over. It reached its peak in July 2019 when the Fed was forced to cut rates while 73% of the yield curve inverted. The point about this ratio is that declines after cyclical peaks led to every recession since 1967. 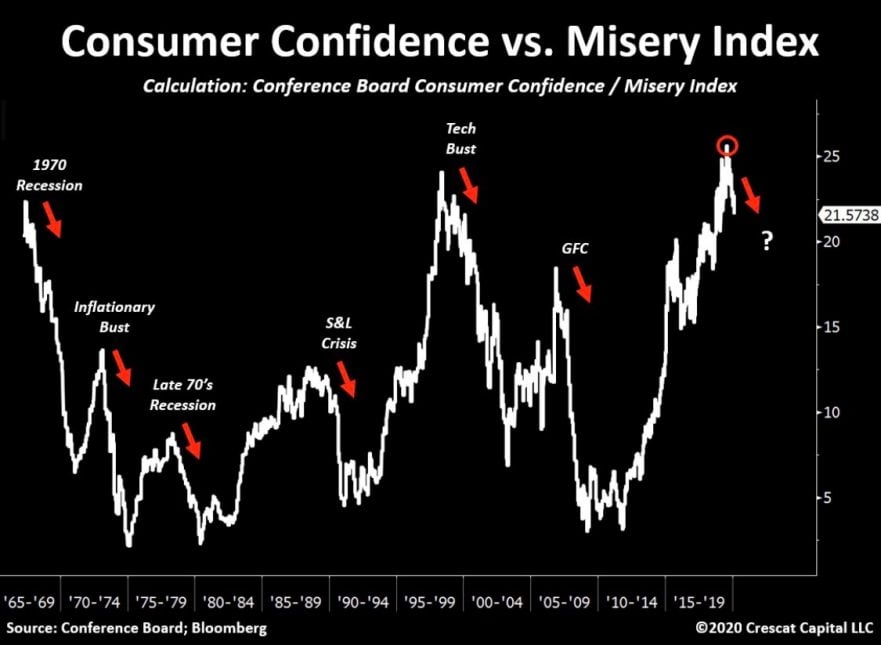 Our sovereign bond spread thesis has also worked remarkably well recently. In our global macro fund, we have been long US Treasury bonds versus a short of European and Japanese sovereign debt to profit from a narrowing yield spread. We believe this trade has much more to go. It could be a fourth leg of our Macro Trade of the Century. Below, we show the chart of the German vs. US 10-year yield spread. It tends to narrow as we enter the downturn in the business cycle. Part of this phenomenon is due to the flight-to-safety move that creates inflows towards US Treasuries and other USD assets. In our view, even after the recent US yield collapse, the entire US yield curve remains attractive compared to many global developed market alternatives.

At Crescat, we are determined to capitalize on the cyclical downturn in the stock market and global economy. We recently shared our detailed analysis in a 45-minute webinar right before the recent market decline. Check out the video link below:

The chart below shows how Crescat’s hedge funds have been performing since the almost certain euphoric market top in the S&P 500 Index on 2/19/20. Since then, Crescat Global Macro Fund is up 18.3% and Crescat Long/Short Fund is up 14.3% based on estimated net performance.  Meanwhile, the S&P 500 has declined 11.7%.

We believe there is so much more to play out in our favor now that the stock market has finally, almost certainly peaked. We believe we are headed into a serious global economic downturn from record global debt to GDP levels. Furthermore, there is a truly historic banking and currency bubble in China that we believe will soon burst. We haven’t seen anything yet on the currency front in terms of the yuan devaluation that we are projecting. In our opinion, the world is totally oblivious to the enormous Chinese banking imbalances. A highly probable yuan collapse in our view will be financially contagious and add to the severity of the coming global recession. Recessions are perfectly normal. We are not perma bears. We plan on getting bullish at depth of this global economic cycle downturn. Until then, we believe there is so much more to play out by continuing to be tactically positioned for a significant bear market. 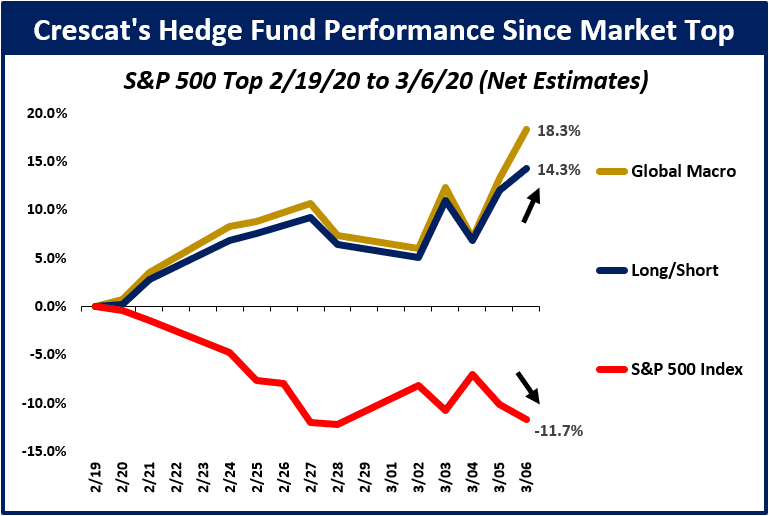 2020 Performance Across All Crescat Strategies 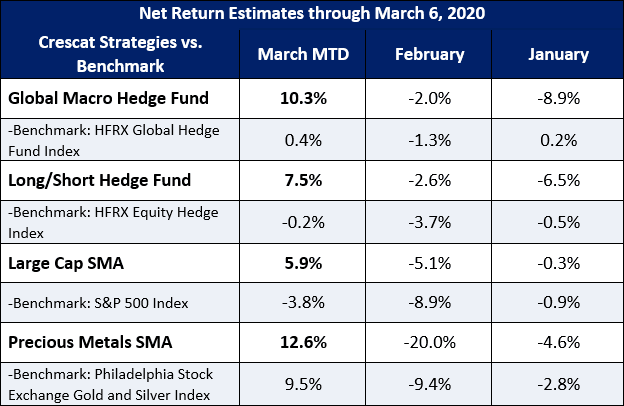 If you have an interest in learning how our strategies could be a good fit, we encourage you to check out our website and to contact Linda Smith at [email protected] or (303) 228-7371. She can provide information on how to become an investor or set up a call with the investment team.