Whitney Tilson’s email to investors discussing that it’s the best time to be an investor in more than a decade; you’ll never guess the best-performing major stock market in the world this year; is today’s puke-out the bottom?

The Best Time To Be An Investor

1) With the S&P 500 Index closing yesterday down 18.9% from its all-time high only three weeks ago (it seems like a lifetime, doesn't it?), and the markets down big again so far today, it looks like this will be the index's fastest bear market (defined as a 20% drop) in nearly a century.

Investors are being bombarded with negative headlines like these:

I fully expect similar headlines to dominate the 24/7 news cycle for at least a couple of more weeks.

In light of this, you might be surprised to hear my view that it's the best time to be an investor in more than a decade – many stocks are incredibly cheap, and I think we're near a bottom.

Those of you who know my history may be surprised to hear this, because during the first two market panics of my 20-plus year investing career, I didn't turn bullish after a 20% decline...

And when we entered a bear market in mid-2008 as the housing bubble imploded, I said things were going to get a lot worse – and they did.

In addition, after I called the top of the bitcoin bubble to the hour on December 16, 2017, when the cryptocurrency quickly fell 20%, I said things were going to get a lot worse – and they did.

But I'm not a perma-bear. In my e-mail on December 21, 2018, right when markets were bottoming after a roughly 20% decline (depending on which index you look at), I rejected my friend's comparison to the financial crisis in 2008 and 2009, writing "There is no comparison."

The dot-com and housing bubbles took years to inflate and reached massive proportions, so when they burst, it took years for the markets to adjust.

What we're experiencing now is very different: It's a flash crash, caused by a black swan event.

If you believe that humanity, broadly speaking, will be able to get a handle on the coronavirus pandemic reasonably quickly – as China did earlier this year, and as Taiwan has done without locking down the country, as this study highlights: Response to COVID-19 in Taiwan: Big Data Analytics, New Technology, and Proactive Testing – then stocks will likely rebound sharply.

Though I'd be surprised if the major indexes surpassed their February highs anytime soon – certainly not this year – even a partial recovery would translate into big gains from here... especially among the most beaten-up stocks, which are now down more than 50% over the past three weeks. (We recommended four of them on Monday to subscribers of our Empire Investment Report...You can learn more about a subscription – and how to get 40% off the regular price – right here).

The Best-Performing Major Stock Market In The World

2) To see what this rebound might look like, let's look at the best-performing major stock market in the world this year.

You'll never guess which one...

That's right: the Shanghai Composite index is down only 4.2% year to date.

I was stunned to see this, in light of the near-total shutdown of the country's economy less than two months ago and the halting recovery since then...

But as you can see in this chart, after a sharp 14% drop, the index quickly rebounded... 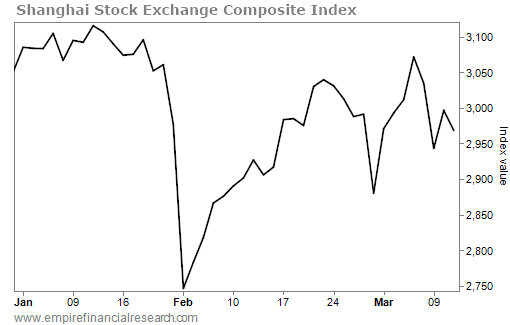 I expect the U.S. markets to have a similar recovery in the near future.

Is Today's Puke-Out The Bottom For Major Stock Markets?

3) The question is: when? Is today's puke-out the bottom?

What I can tell you is that I put another 15% of my long-term investment portfolio – which has been sitting mostly in cash since I closed my hedge funds in late 2017 – to work on the open this morning.

In total, over the past week and a half, I've invested approximately half of the total amount I plan to put into equities. My strategy is to dollar-cost average into high-quality U.S. stocks, buying on days when the market is down big, but with the humility to know that I will never be able to time the exact bottom.

As I wrote in Monday's e-mail:

We claim no ability to precisely identify when stocks will stop going down. In fact, we can almost guarantee that any stock you buy right now will be lower – perhaps much lower – at some point in the future.

So why do we recommend putting some dry powder to work now? Because we think the coronavirus pandemic won't be as severe as most people think, for reasons we outline in the full report. And because we have the experience, wisdom, and humility to know that neither we, nor anyone else, will know the exact moment when stocks have bottomed. Instead, we're doing careful analysis of both the coronavirus pandemic as well as a handful of companies we know well, in order to be directionally correct in the timing of our buy recommendations.

Perhaps it sounds illogical, indecisive, or fatalistic to recommend buying stocks while also warning that they're almost certain to go lower. But, as veterans who have profited from many other market panics, from the Asian and Russian financial crises, Long-Term Capital Management, the bursting of the dot-com bubble, the Great Financial Crisis, and the European sovereign debt crisis (not to mention health scares like Ebola, SARS, bird flu, and MERS), it's the best we can offer – and it's the truth...

In tomorrow's e-mail, I'll share my thoughts on what two pieces of data I'm tracking that I think will indicate when stocks will bottom. Stay tuned...