ValueWalk
Home Business The 20 largest college endowments in the US 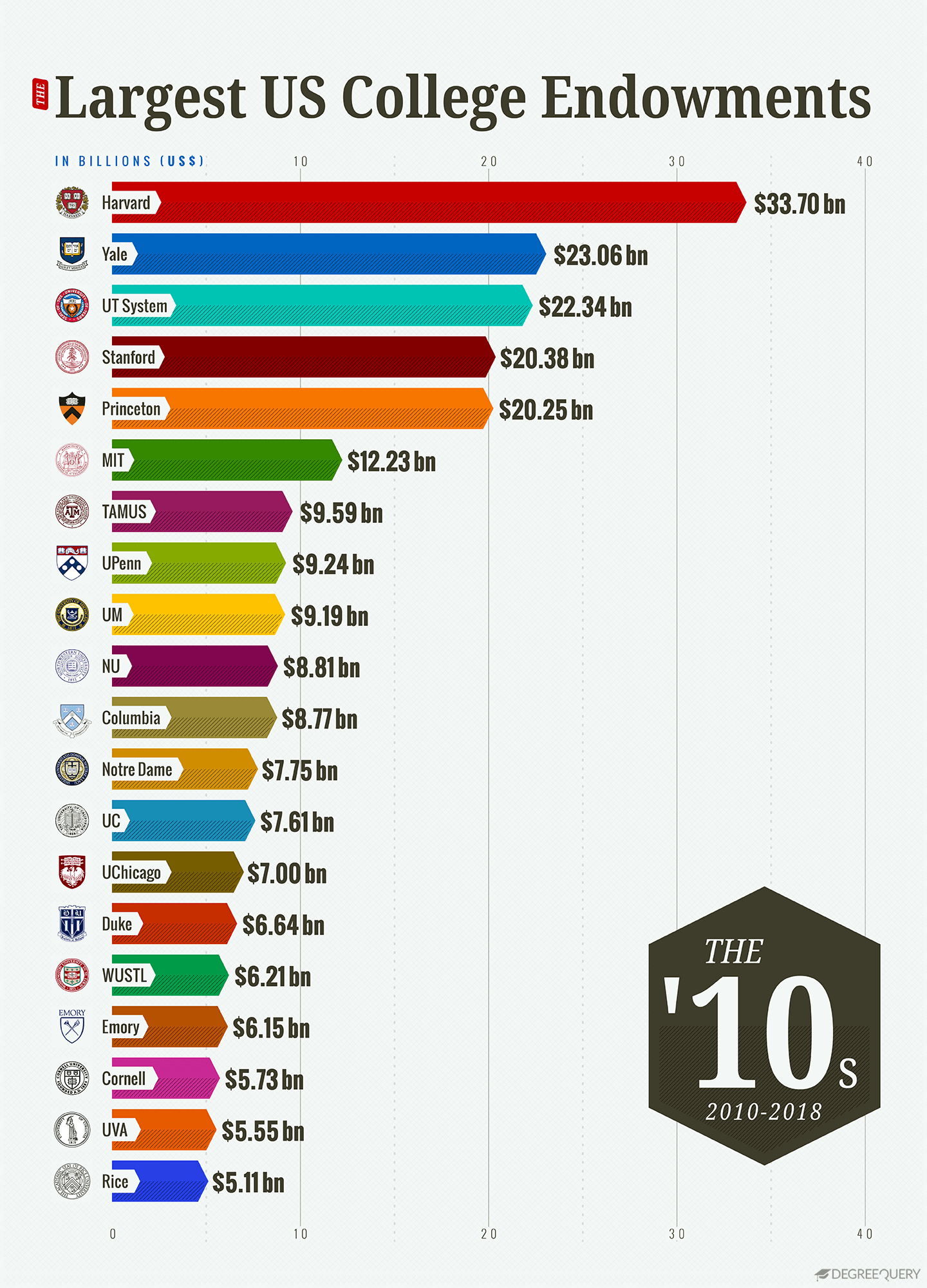 A college endowment means the amount of money a college receives in donations, which can then be used for a variety of purposes, including offering scholarships, upgrading facilities, hiring professors, and more. Endowments are non-taxable vehicles established to contribute toward the future funding requirements and their funding comes from a combination of legacies, gifts and investment returns.

Normally, a donor can specify how they want their donation to be spent, which is why they tend to go towards specific goal-oriented areas rather than being used as general administrative funds.

They have always been an important part of college finances, but over the last 30 years, the market value of the top 20 college endowments has sky-rocketed from $30.6 billion to $302.1 billion in the USA. With that much money being donated, it’s no surprise that there’s increasing scrutiny about who gets it and what it’s used for.

Here’s how college endowments have changed over the last 30 years and where the money has gone.

We’ve already mentioned that the market value of the top 20 college endowments in 2018 was $302.1 billion, but the total market value across 810 colleges in the USA was $624.3 billion according to the most recent NACUBO survey. That means that a whopping 48.3% of the total endowments go to just those 20 colleges, which means that just over half of the total has to be shared amongst the other 790 colleges surveyed and the hundreds of thousands of students that attend them.

The nature of the largest college endowments means that they can invest in a diverse array of asset classes and grow at a pace the rest of the economy can only aspire to. For example, between 1990 and 2020, the Fortune 500 grew at an annual average rate of 6.6%, while the 20 largest college endowments grew by 8.5%. There was particularly impressive growth at the University of Michigan, Duke University and the University of Notre Dame, but way out at the top of the cash pile are Harvard and Yale. 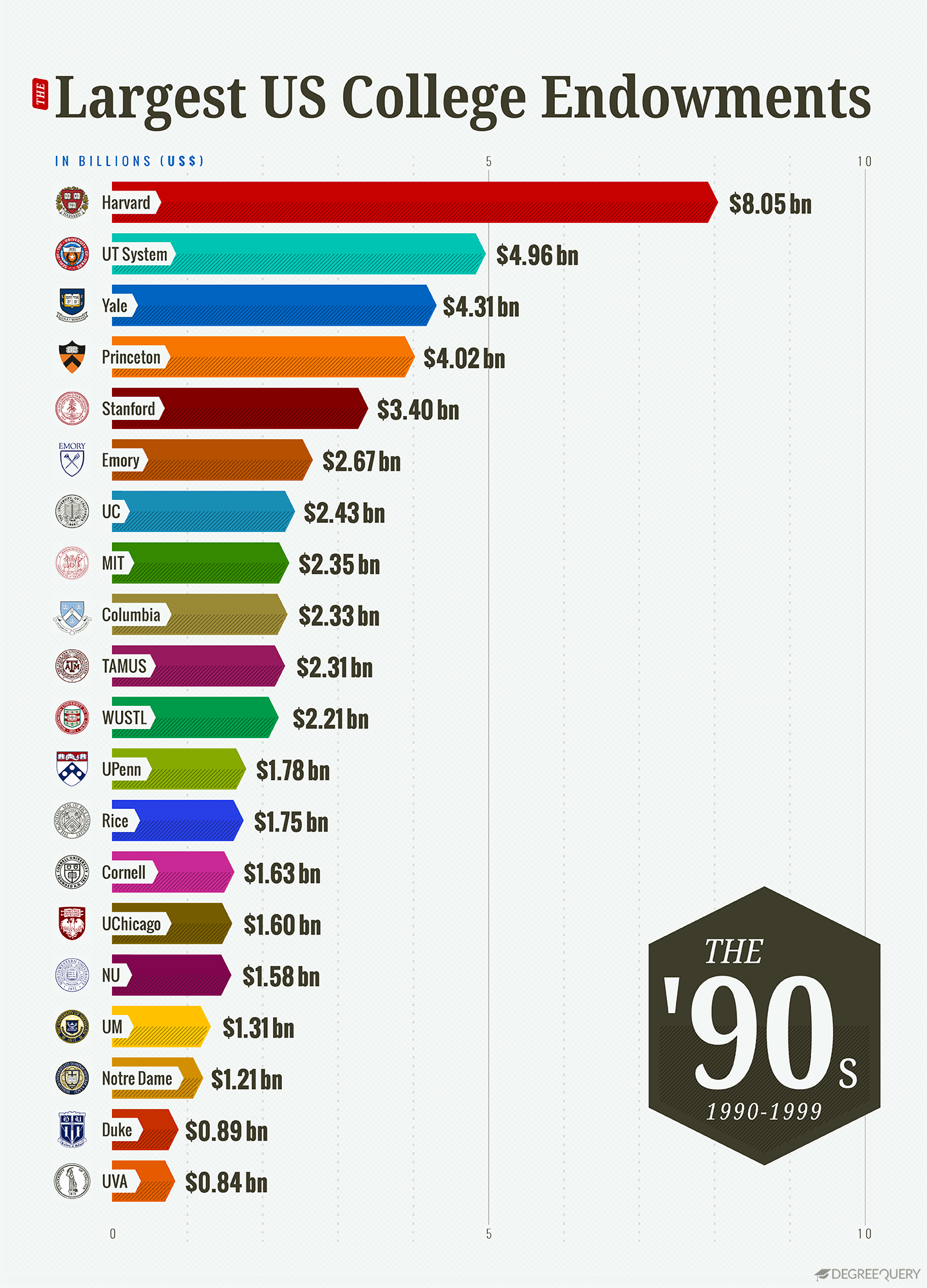 Endowments in the 90s

Speaking of Harvard, across our three decades shown here, it remains comfortably above all the rest for endowments, starting off in the 90s with over $8bn, more than $3bn more than second placed University of Texas System. UT System’s endowment may have been close to $5bn, but its growth was actually the slowest of all the top 20 colleges here.

The 90s were when college endowments started to get supercharged, with an average annual growth rate of an incredible 12.5% making it the fastest growing of the three decades covered. Even so, the gulf between the haves and the have-nots is clear with 20th placed UVA getting only around 10% of the endowment value of 1st placed Harvard. Would things change to be more equal in the new millennium? 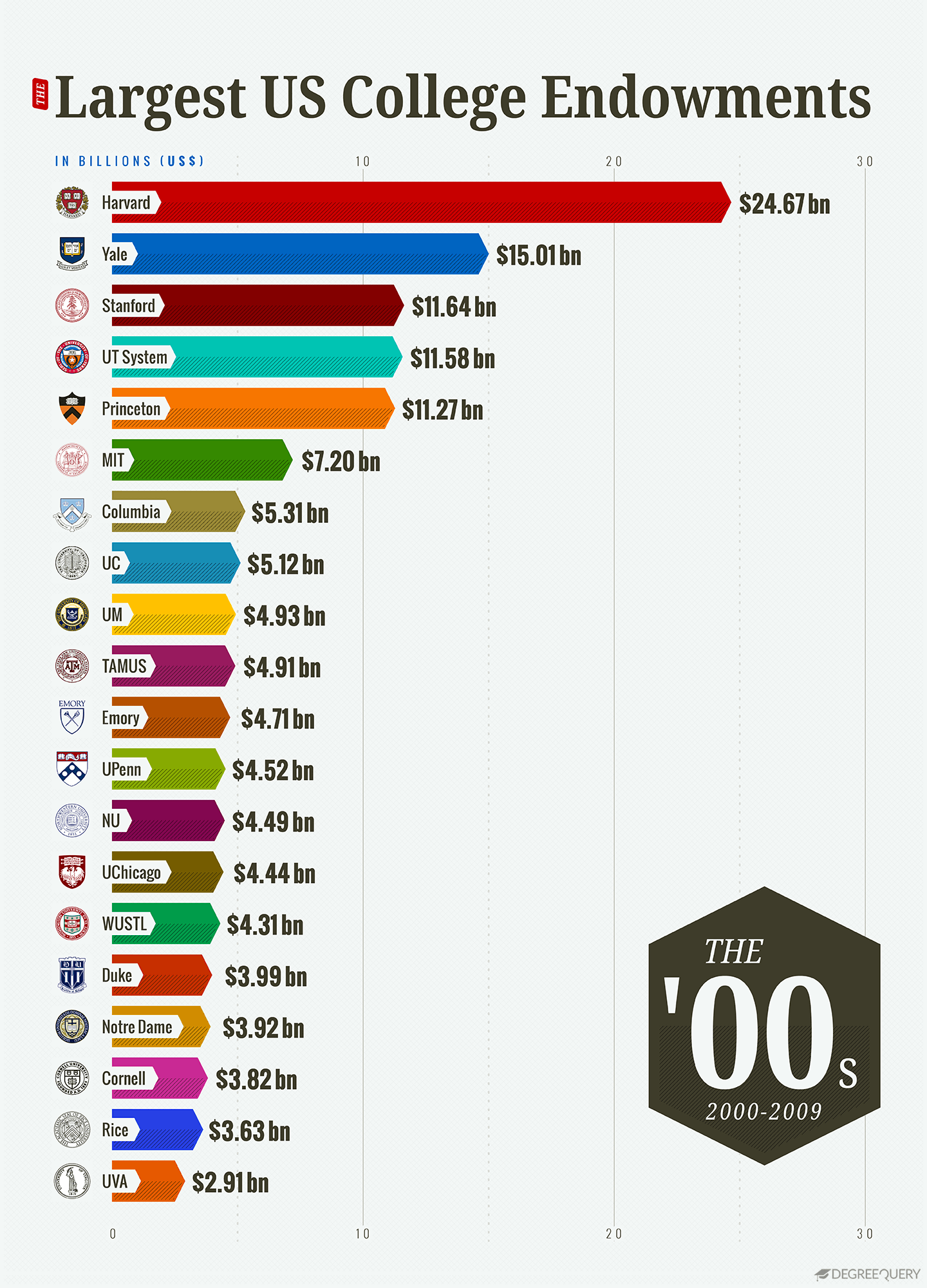 Endowments in the 00s

Well, no. As you can see, Harvard’s endowments value shot up in the 00s, going from $8bn to an eye-watering $24.67bn. By contrast, UVA remained in 20th place and had only risen to $2.91bn, thus falling much further behind financially. Perhaps as a legacy of its slower growth in the 90s, UT System is down to fourth in the 00s, overtaken by Yale and Stanford while only just staying ahead of Princeton.

For Yale the 00s were a mixed decade for endowment growth, because while going from $4.31bn to $15.01bn seems like a very positive story, it doesn’t tell the whole tale. As you’ll remember, the end of the decade saw global economies going into freefall, which badly affected the value of some college endowments that were invested in private equity, real estate and hedge funds.

Yale fell into this trap, losing 28.6% of its market value, while across the top 20 the total market value went down by 3.4%, with Harvard, Duke and Stanford amongst the other colleges also taking a hit from the downturn.

Endowments in the 10s

Perhaps not surprisingly, the 10s was a story of continued growth as the markets recovered from the recession of the late 00s, but that growth was still slightly stalled compared to the 90s. Harvard remains way out in front, but perhaps not quite as not as far as it might have expected, having gone up to $33.70bn by the end of the last decade. As a sign of dissatisfaction at its growth in this area, in 2017 it announced it was laying off half its 230-person investment staff.

After suffering that blow in the previous decade, Yale remains in second place with growth taking it up to $23.06bn, just ahead of UT System. At the other end of the list there’s good news for UVA finally rising up to 19th, while other colleges enjoying growth this decade include the University of Pennsylvania and the Texas A&M University System, both of which rose up the table a few places each.

The annual average growth of the top 20 in the 10s was 7.6%, some way below the rate of the 90s, but a good return to form after the 3.5% of the 00s. Continued growth seems likely despite legislative changes like the 2017 Tax Cuts and Jobs Act, which imposed a 1.4% tax on the net investment income of the wealthiest endowments. What do you think the top 20 list will look like by the end of the 20s?