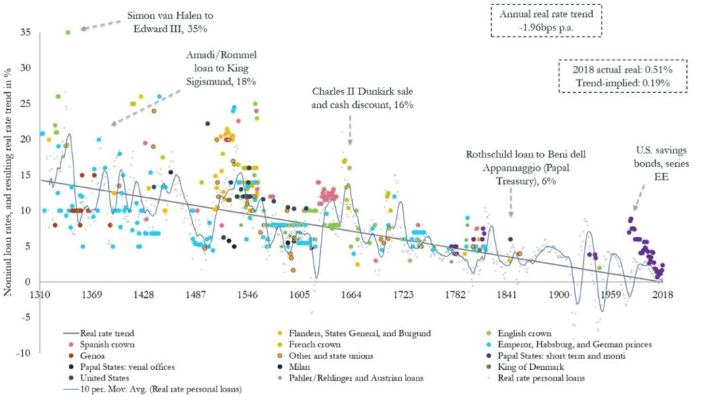 Logos LP commentary for the month of February 2020, titled, “Late-Capitalism and Borrowed Time,” discussing that the Treasury Bonds will continue to deliver strong risk-adjusted returns.

Meanwhile the service sector PMI reading hit its lowest level since 2013 while the S&P 500 forward PE ratio hit its highest level in nearly 18 years. That number is well above recent trends, eclipsing five, 10, 15 and 20-year averages while the bond market “screams” ever louder at the increasing disconnect between its outlook for the economy and that of the stock market, which has been signalling increased optimism for growth stocks.

Many pundits who remain constructive on the stock market have pointed a finger at the outbreak’s effects regarding the recent defensive rotation but there is likely more to it than a simple near-term hit to corporate earnings. Why? Well so far this year, utilities and bonds have BY FAR outperformed the broader market and the bond rally has been going on for some time now.

Simply put, there are many conflicting signals out there. Besides the virus issue, many market participants view the present stock market as overpriced. The view from a technical basis seems to support this. Furthermore, since the October lows, the S&P has been trading in a range that is 9-11% above the 200-day moving average while sentiment indicators flash extreme greed and speculative trading among retail investors has pushed story stocks like Plug Power (NYSE:PLUG), Tesla (NYSE:TSLA) and Virgin Galactic (NYSE:SPCE) to eye watering heights.

Credit conditions are loose, risk taking behaviour is high and capital is abundant; all “late cycle” market signs. Based on the above, many have posited that the market is now “overvalued” or uninvestable with even the eternal bull Warren Buffett in his latest annual letter, warning that debt should be used sparingly, current stock market valuations are “sky-high” and “anything can happen to stock prices tomorrow…[as occasionally]...there will be major drops in the market, perhaps of 50% magnitude or even greater”. Not exactly his usual light and airy bullishness...

What to make of all of this? As always, market cycles present the investor with a daunting challenge given that:

On a short term basis, a “breather” was likely necessary given the overbought conditions coming into 2020, yet as for the medium to longer term outlook for stock ownership we believe that it is likely no longer possible to be “macro agnostic”. What does this mean?

A hint can be found in Buffett’s recent letter cited above:

“If something close to current rates should prevail over the coming decades and if corporate tax rates remain near the low level businesses now enjoy, it is almost certain that equities will over time perform far better than long-term fixed-rate debt instruments.”

If we deconstruct the long-term bullish thesis it is roughly that: 1) easy money conditions will continue with an accommodative Fed and a president that wants a roaring stock market at all costs 2) full employment conditions 3) high U.S. consumer and business confidence and 4) demographic tail-winds: ie. millennials that are reaching peak income who will fuel the next phase of growth in personal consumption prolonging the bull market cycle.

Let’s focus on point 1 to illustrate what we mean regarding the impossibility of being macro agnostic.

EPD Macro Research has provided an excellent analysis demonstrating that throughout history, the economic cycle has been a significant driver of asset class performance. The research points out that when economic growth is improving, stocks deliver strong returns, diminished volatility, and interest rates generally rise. As economic growth slips and moves into a downward trend, stocks generate muted returns with heightened volatility, while bond prices surge.

During the past two years, economic growth has undeniably weakened in the United States. Despite the material weakening of the US economy in the past year, BOTH stocks and bonds delivered returns that exceeded their historical average.

The risk-adjusted return of Treasury bonds

The strong performance in Treasury bonds is less of a surprise as declining growth is generally favorable for bond prices. Stocks over the past year and a half, however, have generated a risk-adjusted return nearly 3x the average ratio seen during periods of declining growth.

Treasury bonds have followed the economic cycle with impeccable precision, generating slightly stronger gains than past samples of "below trend" growth. Treasury bond investors have been rewarded for following the direction of growth.

As long as economic growth remains in a downward trend, history and the fundamentals of economics argue that Treasury bonds will continue delivering strong risk-adjusted returns relative to other more cyclical assets.

The question is why stocks have performed so abnormally given the weakening in economic growth? The answer is to be found in Buffett’s suggestion above RE: rates and corporate tax- in other words, pillar 1 of the bull thesis.

Under the above framework, like it or not, the investor by allocating his portfolio cannot help but make an implicit decision about where he/she believes growth and interest rates (monetary policy) are going over the long term. Thus, investments in stocks under current conditions are explicitly and implicitly based on large sets of forecasts about the future.

What can be gleaned from the above RE: putting new money to work today?

First and foremost, equity investors should likely reduce their expectations for returns and especially so for individual stocks that have deviated not only in degree but also in direction, rising significantly during a period of declining growth.

As long as economic growth remains in a downward trend, history and the fundamentals of economics suggest that Treasury bonds will continue delivering strong risk-adjusted returns relative to other more pro-cyclical assets.

Can we expect a statistically significant rebound in growth? Based on what we’ve seen, global growth indicators are likely to further slow this year with the impact of the Corona virus, taken together with slower growth in the labor force and the shift to services which continue to act as a drag on growth in the developed world. As such, we see rates continuing to go lower until further loosening of financial conditions and stimulus become politically untenable, or until such “financial engineering” loses its effectiveness due to diminishing returns.

Does this mean the way forward is to sell stocks in order to buy bonds, cash equivalents and gold in drag? In this monetary environment, such a “boycott” of the equity markets would be unwise, yet until we see more convincing evidence of a cyclical upturn, reducing leverage, realizing outsized returns, tempering expectations for equity returns and preparing for big drops in the equity market (mean reversion) would be recommended. Macro-agnostic in this environment? We think not.

Our piece on New Relic featured on ValueWalk.

Our new 1-1 coaching and advisory programs have launched. We help you build confidence in your understanding of the financial world in order to build a portfolio of assets that align with your financial goals.

On a lighter note, one thing I would also recommend in any market but perhaps even more so in this market, is the practice of gratitude.

My mother sent me a simple thought provoking video about the subject recently.

At a time when the indignities and absurdities of our contemporary economy - with its yawning inequality, super-powered corporations, outsized returns, billionaires battling for the presidency, extreme narcissism and obsession with optimization and productivity - are more glaring than ever, it is important to reflect on how much we have to be grateful for.

How lucky are we to be in a situation where we can drive our own cars, run our own businesses, send our kids to publicly funded schools, have enough to even discuss making a return on investment and of course have our basic needs met? At a time when consumer and business confidence is at record highs, and we have the luxury of protesting for higher wages, more benefits, the eradication of entire industries in the name of the planet, as well as more of anything and everything, it is so easy to overlook just how good we have it in developed countries.

Let's remember that by having:

We have more than most people on this earth.

So the next time that feeling of frustration anxiety or outrage washes over you, whether about the IRR on your project, the CAGR on your portfolio, the so called death of the American Dream, the amount of traffic/likes on your Linkedin/Instagram posts or whether or not you are getting your “fair share” of whatever pie you are concerned about, think about the inverse.

What do you have to be grateful for today? What makes waking up in the morning a blessing instead of a curse? You may be surprised by the great abundance you find.

As we navigate “Late-Capitalism” with its social, moral and ideological rot and wonder what comes next, I think much of the answer can be found in the practice of gratitude.

Mortgage delinquencies are at record lows 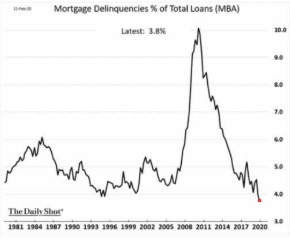 Our best wishes for a month filled with gratitude,