Whitney Tilson’s email to investors discussing restaurant brands; Stage Stores’ comparable sales; beware of stock promotions; admit it: you have a box of cords you’ll never, ever use again.

1) In yesterday’s e-mail, as part of our analysis of Burger King and Popeyes franchisee Carrols Restaurant Group (TAST), my friend Glenn Tongue noted that:

With that in mind, let's take a look at the franchisor for both Burger King and Popeyes (as well as Tim Hortons, Canada's largest quick-service restaurant chain), Restaurant Brands (QSR). Glenn writes:

Our discussion of Carrols made me think about the franchisor, Restaurant Brands. As I noted yesterday, that's a wonderful business: the franchisees are working day and night to increase revenues, there is typically a runway for opening new stores, and the franchisor is often a landlord for the franchisees. There are beautiful financial dynamics associated with getting paid a percentage of franchisee revenues with limited attendant expenses.

QSR has traded down from almost $80 five months ago to $63 today, a level it first reached two and a half years ago. The result is that the stock is the most attractively priced it's been for years, at 21 times this year's earnings estimates of $3/share (it also pays a 3.2% dividend).

That's not screamingly cheap, but a roughly market multiple for a top-decile-quality business is starting to look like an interesting opportunity...

Thank you, Glenn! Here are the identical charts for QSR that I put together with CapitalIQ for Carrols yesterday. The one below shows QSR's huge operating cash flow ($1.4 billion over the past year) versus its negligible capital expenditures ($65 million): 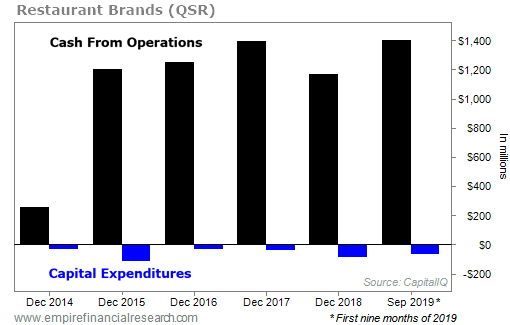 This next chart shows QSR's acquisitions of Tim Hortons in 2014 and Popeyes in 2017 (it was originally just Burger King): 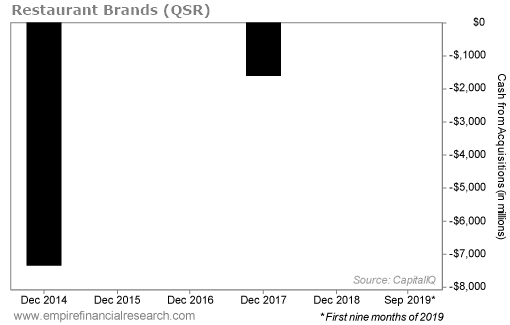 And the last chart below shows QSR's net debt (backing out the operating lease obligation increase in 2019 due to a change in accounting rules). As you can see, debt rose to fund the two acquisitions, but is otherwise flat or declining thanks to the company's robust free cash flow: 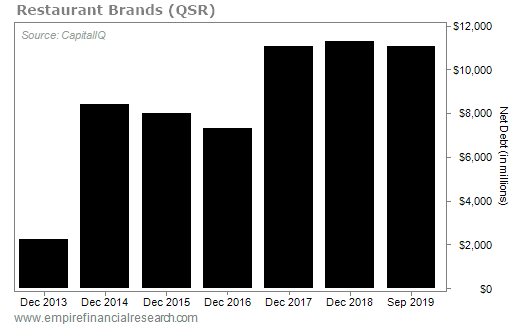 2) Be careful of playing "dead cat bounces" of crappy, dying companies like clothing retailer Stage Stores (SSI). You don't often see a stock collapse 57% in one day, but that's exactly what SSI did on Monday. Here's what happened...

The company last earned a profit in calendar year 2015... and its losses have been accelerating. Not surprisingly, SSI shares – which peaked at nearly $30 in 2013 and were still above $20 as recently as 2015 – crashed to a low of $0.55 last August. With a market cap of only $16 million and net debt of $652 million at the time, Stage Stores' next stop was a bankruptcy filing.

But last September, the company announced that it was going to convert all of its stores to the Gordmans off-price store format. SSI shares started to move, rising above $1 and, less than two weeks later, above $2.

Then in late November, the company reported third-quarter results. At the time, CEO Michael Glazer boasted:

Our outstanding third-quarter results give us further confidence in our decision to convert the entire company to an off-price business model. The 17.4% increase in third-quarter comparable sales was driven by a variety of factors that encompass our guests' positive reaction to the new Gordmans stores and our pre-conversion activities. The 89 department stores converted to off-price during 2019 delivered a combined sales increase of nearly 40% in the third quarter.

He also gave strong guidance for the fourth quarter:

Looking ahead, we remain on track to complete our conversions by the third quarter of fiscal 2020. Based on the outstanding results in the third quarter and strong momentum entering the fourth quarter, we are raising our full-year guidance. We now project fiscal 2019 adjusted EBITDA of $35 million to $40 million, compared to prior guidance of $20 million to $25 million. This reflects revised annual comparable sales of 7% to 9%. We also expect to deliver positive cash flow for the full year 2019 of more than $35 million.

The stock went nuts, doubling in two days to nearly $5 per share. It continued to soar, doubling again, to a peak of $9.50 per share last week. It was a 10-bagger in less than four months!

But the bottom fell out on Monday when the company issued an earnings warning. Glazer said:

While our positive comparable sales for the holidays did not meet expectations, we remain confident that our off-price strategy will lead to profitable growth in the future. Holiday comparable sales were primarily impacted by lower pre-conversion department store sales relative to our projections, and by the warmer holiday season. We now expect fiscal 2019 comparable sales in the range of 4.0% to 4.5%. In January, comparable sales are off to a strong start, with the first week increasing double digits.

In response to the holiday sales performance, we implemented incremental promotional efforts in the fourth quarter to ensure appropriate inventory levels as we enter fiscal 2020. As a result, we now expect full year 2019 earnings to be approximately $25 million to $30 million below the low end of the previously announced guidance range.

I spoke with a number of shareholders that day. And as you would expect, they were furious... In their opinion, to have issued such bullish guidance eight weeks ago and then missed it so badly is evidence that Glazer is either completely incompetent or totally delusional... or was manipulating the stock.

They shouldn't be surprised, however. This kind of nonsense is par for the course when you're dealing with microcap stocks on the verge of bankruptcy. There are so many things companies can do to, at least temporarily, juice their stocks...

3) Another thing to look out for are stock promotions. A well-known one (among short sellers, anyway) is LED manufacturer Revolution Lighting Technologies (RVLT), whose shares have collapsed from nearly $50 in 2013 to $0.09 today.

Or consider another classic promotion (and lighting company), Research Frontiers (REFR). Good 'ol "Reefer," as my short selling friends and I call it, refuses to die. In fact, the stock is nearly triple its levels a year and a half ago – despite the company never having annual revenue exceeding $2.2 million and never once earning a profit in the last 30 years! How is this possible? Easy – just keep issuing stock to gullible investors...

Lastly, here's another example of a stock promotion that hasn't yet collapsed: Canadian alternative-power company Ballard Power Systems (BLDP.TO). The stock has roughly tripled in the past year, even though revenue has declined each of the past two years and is lower than it was 17 years ago. The company has reported only one profitable year in the past 20, yet it sports a roughly $2.3 billion market cap!

I was short all of these stocks years ago – mostly profitably, even though these companies have somehow stayed alive...