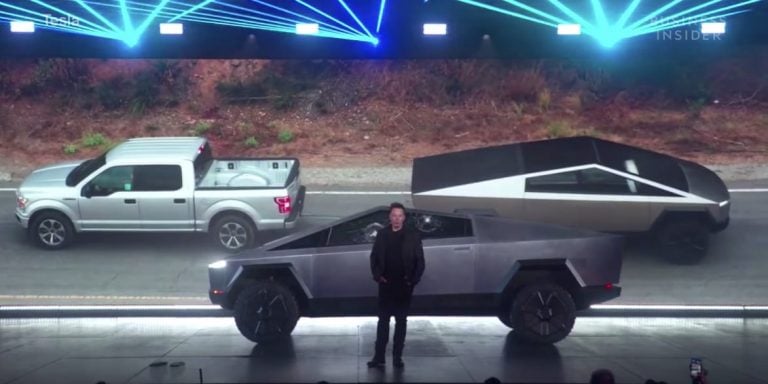 The new Tesla Cybertruck prototype was revealed last month and it sparked a lot of attention for many reasons. It boasted a different design than you’d usually expect on a truck, followed by an incident when Tesla’s CEO, who showcased the truck, ended up smashing the glass when he hit it with a hammer. Now, the Tesla Cybertruck prototype again got a lot of attention when the vehicle was spotted in the wilds of Los Angeles. This photo surfaced on Twitter, and you can’t help but agree that it looks huge.

Cybertruck in the wild near LAX pic.twitter.com/E4FW4KCkgS

The Cybertruck has been featured, rumored and hyped for months, and it was finally revealed last month. The specifications of the truck truly lived up to its expectations, boasting a range of up to 500 miles, segment-leading functionality, and more so than anything – an affordable price which starts at $39,000.

However, despite the inviting specifications, the fact that Tesla brought this innovation to the car industry, and the huge hype over it in the last month, the uncommon design of the Cybertruck resulted in a lot of people being turned off from it. Despite that, the Cybertruck went up for preorders, receiving over 200,000 preorders. Now, since a few weeks have passed, even though people already accepted its look, the design is still sparking a lot of attention.

However, now, thanks to the enormous luck of Twitter user Cody Simms, those who look forward to the massive Cybertruck can finally see what it looks like in action. While seeing the design of the Tesla Cybertruck prototype on stage at the unveiling event is quite exciting, seeing it in live action is another story. The mentioned Twitter user spotted the prototype dashing by near the Los Angeles Airport, and he took the opportunity to showcase it to the rest of the world.

With the truck now seen in action, many users on Twitter agreed that it is huge compared to the other vehicles that it was surrounded by on the road. It’s worth mentioning that the rear suspension is noticeably raised, which makes sense, given that the company revealed that it will run with an adaptive air suspension.

“Raise and lower suspension four inches in either direction for easy access to Cybertruck or the vault, while self-leveling capabilities adapt to any occasion and assist with every job,” it says in the description of the new product.

The truck’s color in the darker ambient also seems to catch attention. The truck was showcased as stainless steel but it’s noticeable that it looks almost like metallic black as opposes to the stainless steel texture at its unveiling event. The Tesla Cybertruck prototype had a body made of “Ultra-Hard 30X Cold-Rolled stainless-steel,” and because of its sturdiness, it may also be a little more difficult to provide this model in different colors.

What do you think about the Tesla Cybertruck prototype in the wild? Let us know in the comments.