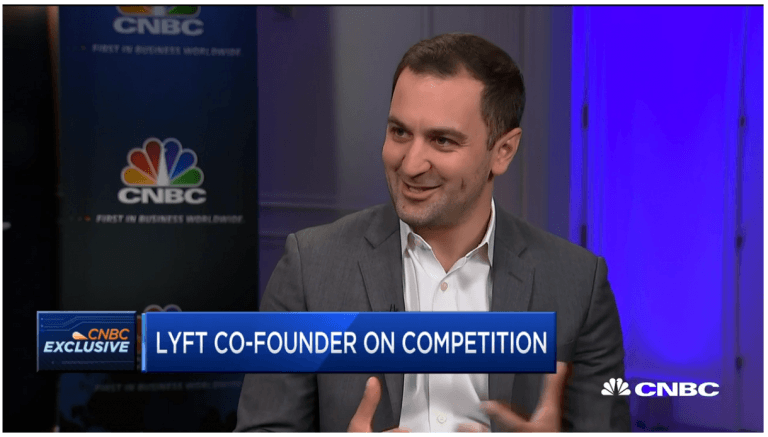 The following is the unofficial transcript of a CNBC EXCLUISIVE interview with Lyft Co-Founder John Zimmer and CNBC’s Wilfred Frost which aired on CNBC’s “Closing Bell” (M-F 3PM – 5PM) today, Wednesday, November 20th. The following is a link to video of the interview on CNBC.com:

WILFRED FROST: I'm joined now by Lyft Founder John Zimmer. John, great to be with you. Thanks so much for joining us.

JOHN ZIMMER: Thanks for having me.

WILFRED FROST: I wanted to ask about the rationalization of competition in ride sharing you've seen here in the U.S. How much has happened since you started? And how much more is there to come do you think?

JOHN ZIMMER: Yeah, quite a bit has happened. Lyft has been around for about seven years. Our mission is to improve people's lives through the world's best transportation. And I think when we came into the market-- it was a new category of transportation. We started peer-to-peer transportation. We-- we initiated kind of that-- that new category. And since then, there's been a lot of competition in the early days, some rational, some irrational. But we're heading into a period of profit-- focused on profitable growth and rationalization. So I think it makes sense that there-- there is some consolidation.

WILFRED FROST: Uber's clearly your main competitor for ride sharing here in the U.S. Is it harder to steal a passenger from them or to steal a driver from them?

JOHN ZIMMER: I think the way I think about it is, on the customer side, we are competing, I'd say more than we are on the driver side. For drivers to be able to have access to both platforms, for us in the newer market, that's advantageous that they can, you know, put some hours on one and some hours on the other. On the customer side it's all about, how can we provide the best product experience. And that's I'd say where the competition is more heavy.

WILFRED FROST: becoming public, have you felt more pressure to hit profitability as opposed to just hit revenue growth in the past?

JOHN ZIMMER: Yeah, I think that's definitely the case. I'd say there's been-- you know, outside of just our industry, there's been a market shift that I would say is healthy, and has also been fast, focused on profitability. It makes sense. And again it's increasing rationality which is positive for both players.

WILFRED FROST: Well, autonomous vehicles is clearly a big future possibility for-- for your area of-- of business. What makes you confident that when that shift happens, whenever that might be, that you'll be able to capture a large portion of the economics versus what you do today, if say, Waymo for argument's sake, is the leading tech. Why won't they claim more of the economics than you will?

JOHN ZIMMER: Yeah, so we are the network. We have the relationship with the customer. You know, we have over 20 million active riders on our platform today. And the way that this will roll out will be gradual. I

f you think about how 3G on phone networks went from, you know, went from 3G to 4G, I think something similar will happen. It wasn't that 4G was everywhere all at once. Autonomous is not going to all of a sudden be everywhere all at once. But, you know, when will autonomous be in an urban core, under 35 miles an hour with no bridges and tunnels in good weather, that's a lot sooner than doing it everywhere.

WILFRED FROST: Do you accept though that as things stand at least, you're going to have to rely on an external software provider more so than Uber might? And therefore, in that Holy Grail of all autonomous vehicles, your margin might be a bit lower because of that?

JOHN ZIMMER: No, I don't accept that. We have better partnerships. And, I'd say a better team that's executing on our own self-driving system. So, I don't agree—

JOHN ZIMMER: --with that.

WILFRED FROST: Fair enough. We were just talking about how none of my friends back home have even heard of Lyft. Do you fear because of your focused first strategy that if and when you do expand geographically that you've lost-- a little bit of the-- early runway as it were because you don't have the brand recognition?

JOHN ZIMMER: Yeah, I mean, look, like, the way we grew up, Uber had launched before us. They had launched with a different product, the black car product. But, you know, seven years ago when we were launching everyone asked that question of us. And we have a track record of going, you know, now over 30% market share. When people, you know, said, "You're never going to survive in this market." So-- that-- that's kind of how we've grown up. That's something that we can execute on if-- if we decide to go international.

WILFRED FROST: How much of an if is it versus a when?

JOHN ZIMMER: It is a real if. But, you know, market by market, we-- we've launched Canada. So, we have U.S. and Canada. By launching Canada, I guess gives us kind of the product platform such that we can do currencies and other languages. But I think about it more like a call option. We are focused on North America right now. And we'll make the decision in the future.

WILFRED FROST: I want to talk about the AB 5 law in California. I saw from one of the analyst's notes that 91% of your drivers in California drive less than 20 hours a week, 76% less than ten hours a week. So, is that new law bad for those drivers, even if it might be good for some of your more-- permanent drivers?

JOHN ZIMMER: Yeah, that's what we've heard from those drivers. I mean, we also have one-- only 1% of drivers drive over 40 hours a week. And so, I think what we're dealing with is that the way labor law has been written historically in the United States, is that you have certain protections that are good for workers that only apply to the employment category. So like, discrimination protection, wage protection, things like that that don't apply for independent contractors.

They should. And so, similar to how we created a new category of transportation, my belief is that we're going to be able to create new protections while maintaining flexibility for drivers. If you were to force all drivers into kind of the employment category, those drivers that are using this for supplemental income would likely not be able to use the platform because we would have to move more towards a shift model. So, I believe there's a balanced approach that we're talking to legislators about that eventually will come to fruition.

WILFRED FROST: So, is that law in the meantime short-sighted?

JOHN ZIMMER: I don't think it's beneficial for me to comment specifically on that law. I think a better solution is possible.

WILFRED FROST: And Uber-- a story today, it says, they are considering rolling out audio recordings of their drive-- of their routes. Is that something you consider as well?

JOHN ZIMMER: We will. Absolutely, we'll look at all-- all different safety measures. We were the first in the early days we instituted a criminal background check, a driving record check. We do continuous-- background checks. So we're always looking to innovate around safety.

WILFRED FROST: I noticed recently that food delivery apps like GrubHub are, you know, clearly struggling. Their stock price has has collapsed lately, very intensive competition. How low does the price have to be for a company like that for you to consider buying it? I know you've wanted to be focused now, but if the prices get very cheap?

WILFRED FROST: My final question, John, was related to where the share price is now. I know that long-term is how you'll be judged-- as opposed to short-term. But-- but given all of the stresses we've seen with the particular example of-- of WeWork, do you feel guilty in any way the way you've sold the company and-- and the stock price is now down from some of those investors that the bought on day one?

JOHN ZIMMER: Look, you know, I care deeply about every investor. Over our course of history-- we've made-- a lot of investors-- a lot of money. I care about our employees that, you know, have jobs from us, that have-- in some comes equities from us. So, I feel a deep amount of responsibility. I feel like the stock is undervalued. And that-- we've had three questions of beating expectations. Yeah, over time people will see us put up more numbers. And it will solve itself.

WILFRED FROST: John, thanks so much for your time. I really appreciate it.