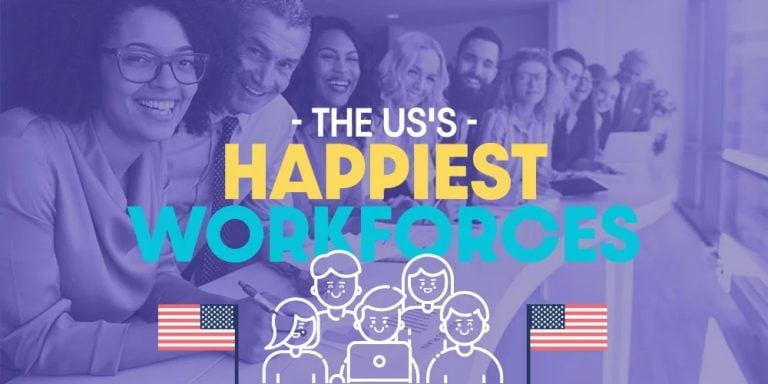 Be honest – are you happy in your job? Whether it’s good pay, a positive workplace environment, or a short commute, there are plenty of reasons to feel positive and happy as you work. You can even track all that in something called an employee engagement score.

The states with the happiest workers

Does the state you live in contribute to how happy you are in your job? Looking state-wide averages for factors, the study reveals which states have workforces which are the happiest in their jobs.

The factors that were taken into consideration include:

Montana came out as the state with the happiest workers, with positive scores across each of the factors. Workers in the state benefit from one of the lowest average commute times and effective tax rates. All of the factors gave them a combined workforce happiness score of 73 out of 100.

North Dakota comes in a very close second with an overall happiness score of 70 out of 100. Working slightly longer hours than Montana, the state boasts the lowest unemployment rate in the US.

Utah workers rank as the third happiest in the US. Employees in the state benefit from working the lowest amount of hours on average in the whole of the US, helping them secure their happiness score of 67 out of 100. The state also ranks 6th best for unemployment rates and effective tax rates.

Employee Engagement Score across the USA

New York comes out on top as the state with the unhappiest workers. With the longest average commute time overall and the lowest employee engagement score, the state scores an overall happiness score of 35 out of 100.

Illinois workers aren’t much happier, only scoring one more point in their overall score. With the highest effective tax score, and the second-lowest employee engagement score, and a rather high unemployment rate, it’s easy to see why workers in Illinois aren’t the happiest on average in their jobs.

New Jersey is named as the state with the third unhappiest workforce in the US. Workers in the state join New York workers in being the least engaged with only a 29% engagement score, and their average commute time is the third-longest in the US. The overall happiness score sits at just 39 out of 100.

Highest and lowest Employee engagement score in the USA

North Dakota has the lowest unemployment rate at 2.7%, whereas Mississippi has the highest at 8.8.%

South Dakota has the shortest average commute time of 17 minutes (of their hours worked), with New York having the longest at 33 minutes.

Alaska sees the lowest effective tax rates at 5.7% with workers in Illinois having 14.9% tax rates.

You can see the full state list for yourself by clicking here.