The future of Elon Musk's empire was in peril in 2016, and new documents reveal more about the desperate plan to save it

I enjoy reading. Given that one of my passions is investing, most of my readings tend to be of the non-fiction variety. This is a shame, as there is so much great fiction out there. So imagine my delight when Tesla offered not one but two fabulous works of fiction for me to digest last weekend: the incredible earnings report and the Solar City saga (presented through depositions that were publicly released last Friday).

I had to pick one to start with, so let’s go with Solar City. As background, it was a solar products company run by Elon Musk’s cousin, Lyndon Rive. Musk was chairman of the board and owned 22% of the company. Musk’s brother, Kimbal, beneficially owned 147,541 shares of SCTY as of September 23, 2016. On November 21, 2016, Tesla closed on the purchase of SolarCity for $2.6 billion.

We are learning quite a bit about the acquisition because of a shareholder derivative lawsuit that certain Tesla shareholders filed against Musk and Tesla’s board. Now that we have the benefit of the deposition documents, we can see what happened: Solar City was failing. It was losing large amounts of money and couldn’t raise capital, so for all practical purposes was bankrupt – and there were no buyers for the business. What a pickle!

This was a big problem for the Musks because they had borrowed against their Tesla, Solar City and SpaceX (another Musk company) stock and were getting margin calls. SolarCity’s failure would likely have brought down the other two companies because of the interconnected web of borrowings.

So Musk did what he’s done many times before: he faked it. He had Tesla make a bid for SolarCity – at a 30% premium (despite the lack of other bidders). But there was a big problem: Tesla shareholders were resisting approving a deal to pay $2.6 billion for a near-bankrupt company. The solution: Musk trumpeted to Tesla shareholders – on a movie set no less! – a revolutionary new product, the solar tile. The only problem was that it didn’t exist – it was as phony a three-dollar bill! But that didn’t deter an increasingly desperate Musk – he presented it as real. Amazingly, the ploy worked: shareholders ended up approving the acquisition. The Musks’ SolarCity stock was bought out at a nice premium and the crisis was averted.

What happened is beautifully depicted in this Twitter thread: 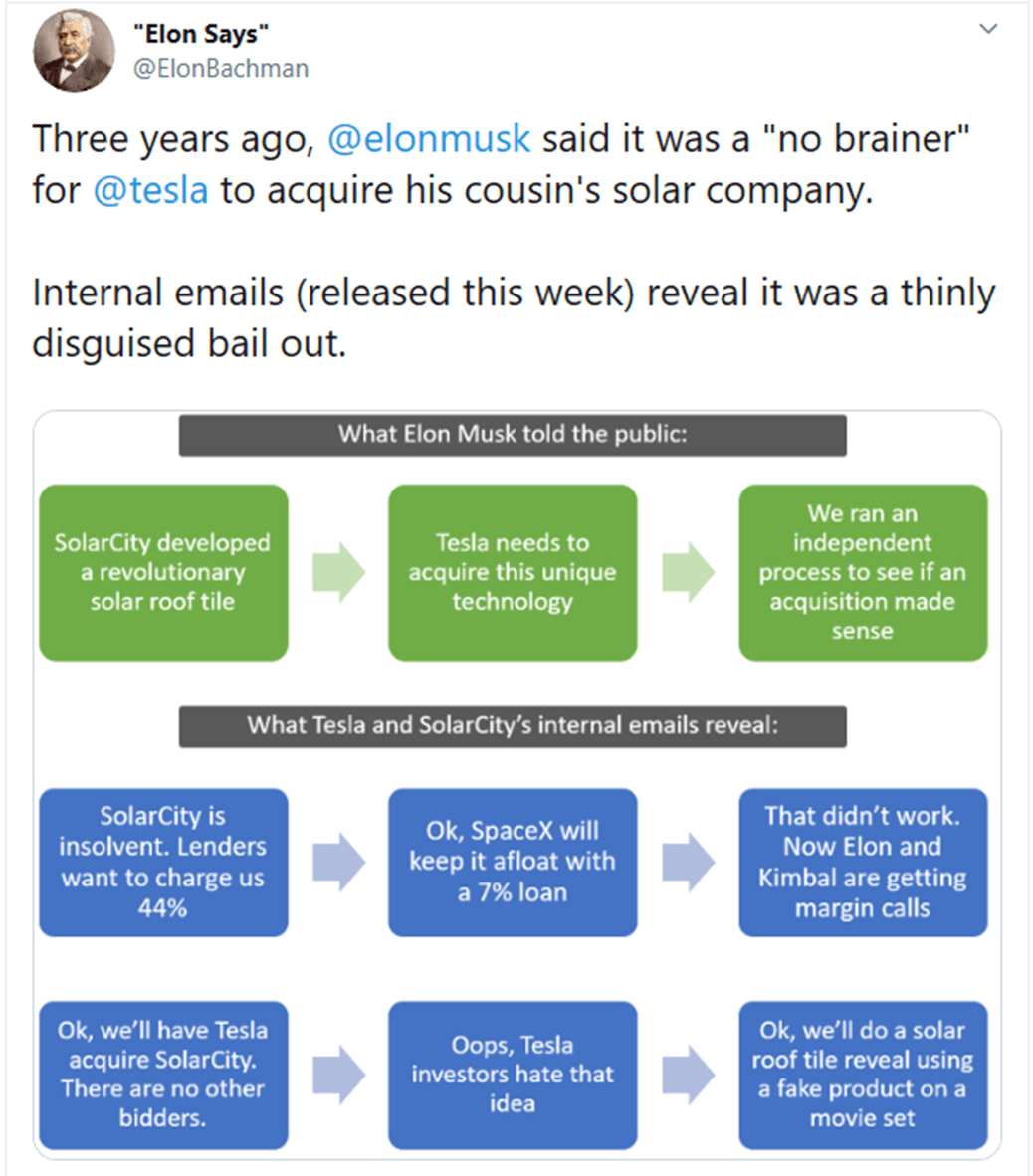 It’s for others to say if this situation was out and out fraud, but it is clear from reading the many depositions that material disclosures were either omitted or improperly characterized.

Studying the depositions gives a unique insight into Musk, in his own words. His behavior is appalling. Here are some direct quotes from Musk: