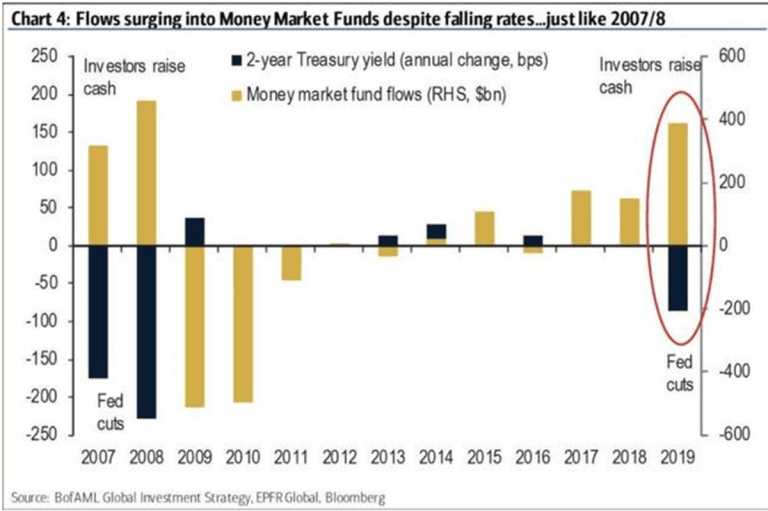 The Dow Jones Industrial Average fell sharply on Friday, weighed down by steep losses in Boeing and Johnson & Johnson. The broader market was also pressured by a decline in Netflix shares that led other Big Tech stocks lower.

The 30-stock index ended the day down 255.68 points, or 0.95% to close at 26,770.20. Boeing dropped 6.8% — its biggest one-day drop since February 2016 — on news that company instant messages suggest the aerospace giant misled regulators over the safety systems of the 737 Max. Johnson & Johnson slid 6.2% after the company recalled some baby powder upon finding traces of asbestos.

Friday’s losses wiped out the Dow’s gains for the week. The index closed down 0.2% week to date.

Both indexes were able to post solid gains for the week despite Friday’s decline. The S&P 500 rose 0.5% week to date while the Nasdaq gained 0.4% as enthusiasm around the first batch of corporate earnings lifted market sentiment.

It was also a brutal week for the software/cloud technology sector. The worst in recent memory.

We are currently in the middle of deflationary period for many once popular software stocks which began in late July/early August and certain names have dropped anywhere from 40-60% in a matter of months. Investing can be a popularity contest and the most dangerous thing is to buy something at the peak of its popularity. As such, we are now evaluating this group as the safest and most potentially profitable thing is to buy something no one likes.

What can be made of this selloff? There are likely a variety of reasons for this repricing tied to the overall pessimistic “macro” narrative that continues to dominate “popular” discourse (more on this below) yet a more simple explanation is that their valuations have gotten ahead of themselves in a market that is maturing.

Not exactly a “blood bath”. Instead, we see this repricing as perhaps a welcome reversion to the mean as well as a maturation of the sector. A swinging of the pendulum back to reality as all new great growth stories tend to do. The reality is that many of these businesses are more economically sensitive than once thought and many are running out of runway. Competition is now fierce and so the multiples must come down. Look at history and this is nothing new.

Many of these names continue to generate impressive amounts of recurring revenue, maintaining breathtaking rates of growth while solving real problems for customers.  All things considered, the weakness in the space along with the weakness in demand for such issue in the IPO market (think WeWork, AirBnB, Uber, Lyft, SmileDirect, Slack etc.) all point to the other side of the “can’t lose investment idea” coin.

This is healthy and rational. The greater fool theory works only until it doesn’t (think WeWork). Valuation eventually comes into play, and those who are holding the bag when it does have to face the music.

"Attractive at any price” in relation to the sector is steadily morphing into simply “attractive” on a more company specific basis. This is why we are beginning to get excited about opportunities in the space and have begun considering increasing our portfolio weighting in software and technology related services. Our focus has been on companies in the sector in the small to mid-cap arena with strong secular growth stories with real free cash flow. As such, we have started to initiate positions in companies like the following:

Not all technology stocks or software stocks are created equal. We believe the market has unfairly treated many SaaS providers with strong growth and cash flows by lumping in real software companies at reasonable valuations with companies that are either tremendously overvalued or that are not even technology focused to begin with. Why should Okta, which is an Oauth replacement trading at over 24x sales, be in the same conversation with some of these other high growth sticky software companies trading below 15x sales? Why is Slack, which seems to have its hands full with MSFT Teams, trading at 26x sales?

While some professional investors may have an answer to these questions, we prefer to wait for compelling valuations to match compelling growth stories. In the meantime, we welcome further multiple compression among highly recurring software businesses as they will provide for interesting upside in the future. Let the baby get thrown out with the bathwater…

Pessimism and frustration are the words that best describe the popular sentiment at present. It has become necessary for the majority (the "Haters Gonna Hate" crowd) to portray every data point and every headline as negative, in the hopes of confirming their views. The facts are that we are roughly 2% off of record highs YTD for the S&P 500. These majority views thus haven’t proven to be particularly profitable.

It has been said that there are four phases in every bull market: 1) Despair 2) Disbelief (of initial rally) 3) Acceptance 4) Euphoria. We think it is safe to say that we have been through the despair phase. Next we have the disbelief phase in which a few begin to believe that things will get better but most question everything and maintain a pessimistic view holding large swathes of their portfolio in bonds, gold, utilities, non-cyclicals and even cash. Have we really moved out of this phase to acceptance?

What pundit can you think of that is optimistic? There isn’t a day that goes by without David Rosenberg at Gluskin Sheff calling for a recession. Don’t forget Ray Dalio at Bridgewater suggesting that we are headed for the 1930s all over again. What person do you know who loves stocks right now and is suggesting that you buy? At a recent Thanksgiving celebration we were informed by most at the party that they had completely exited the markets as a recession was “right around the corner”.  We couldn't help but think that at least if these views prove to be incorrect one wouldn’t be lonely...

This is not indicative of acceptance or euphoria. Instead, we believe the door to the acceptance phase began to open in 2017. For some, there was renewed optimism with a pro-business agenda in play. That crack in the door has been abruptly shut. Negativism is back en vogue and is pervasive anywhere you look.

Just last week The American Association of Individual Investors who runs a weekly sentiment poll where participants express their view on which direction the U.S. stock market will be headed over the next six months reported that 20.3% were bullish, 35.7% were neutral and 44% were bearish. Roughly 80% of market participants are not bullish…This is a huge number.

In other news, investors are flocking to the relative safety of money market funds at the highest level since the financial crisis-era collapse of Lehman Brothers in 2008. The industry has pulled in $322 billion over the past six months, the fastest pace since the second half of 2008, bringing assets to nearly $3.5 trillion, according to data from FactSet and Bank of America Merrill Lynch. Total money market assets are now at their highest level since September 2009!

Today, it’s all about what is going wrong, and the positives are nowhere to be found. The negative rhetoric coming from ALL political candidates across the spectrum is shocking. Watching the Democratic primary debates on TV, listening to Trump at his rallies or on Twitter or watching the Canadian Federal election debates is enough to make you lose hope for the future. Any positive data is being thrown under the rug and the person/party that can say the most shocking and negative thing appears to be the one that gets the most attention.

Quite frankly the political discourse is so uninspirational that we feel confident in saying that the disbelief phase is still in progress today, and the “haters gonna hate” sentiment presented week after week confirms that. The fearful have been joined by the frustrated, and that angry mob has grown to proportions seen during times of crisis.

What to do? We have chosen to accept this market for what it is: it hasn’t gone anywhere for almost 2 years, “safety assets” are leading the market, US household financial burdens today are lower than at any time since the early 1980s, US household leverage (total liabilities as a % of total assets) has declined almost 35% since the mid 1980s, the five largest money center banks in the USA have beaten earnings estimates this quarter, the commentary from just about every Bank CEO was that: "The consumer is ''strong”, the S&P 500 earnings yield stands at +5.90%, growth remains at a moderate pace, inflation is tame, the Fed is dovish and so we will stay the course looking out for opportunities during the acceptance and euphoria phases.

At the end of the day, if this cycle is anything like the others, the currently hyper-valued defensive stalwarts like consumer staples, interest rate sensitive investments, including REITs and utilities, and the heavily embraced bond market, are all poised to underperform dramatically, as a historic capital rotation occurs. As such, looking out into the final 2 phases of the bull market, embracing shunned economically-sensitive assets, when almost all market participants are bidding up the price of “quality”/“safe” assets preparing for a downturn, is perhaps the perfect storm of a contrarian opportunity. As history has taught us, there is no such thing as a good investment regardless of price…

Apparently many think we have another 2008 situation brewing as cash has become king now.

"When the thumb of fear lifts we are so alive.” – Mary Oliver

Our best wishes for a fulfilling month, Logos LP