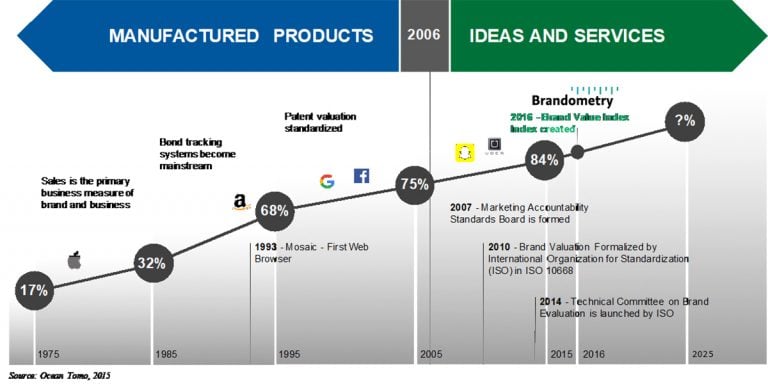 Long running structural changes in the economy have transformed book value into a weak and incomplete measure of corporate value. Technological innovations have dramatically affected where companies acquire capital, what they invest that capital in, and how the value they create is measured. Underway for over 40 years, this economic transformation—and its effect on the relevance of book value—has been profound. When Apple was founded in 1976, 83% of the value of the S&P 500 was captured in financial statements, in line items such as Plant, Property, and Equipment (PP&E). Today, only about 13% of the value of the S&P 500 can be measured in financial statements, which means that outside of equipment- intensive industries like mining, Book Value represents only a fraction of overall value for most companies. The modern economy is idea-based and most corporate value lives completely off the books. Indeed, in this century, for the first time in history, most corporate value resides in Intangible Assets.

It’s important to recall that book value was once called “tangible book value,” which more accurately describes what it purports to represent: the value of all assets, minus intangible assets, net of depreciation. It’s a measurement of the value of things you can touch—and that’s all.

Intangible assets are poorly understood but critical to assessing the valuations of companies in the 21st century. Intangible assets lack physical substance—they can be used, but not necessarily seen or touched. Examples of intangible assets include software, design, partnerships, talent, copyrights, franchises, patents, trademarks, and trade names. The list in the figure below is illustrative but not exhaustive.

In their book, Capitalism Without Capital, Haskel and Westlake outline several of the ways intangible assets behave differently than tangible assets. To truly understand how deficient book value has become in the modern economy, it’s worth covering some basic points.

Intangible assets are created through intangible investment, yet intangible assets—like software, design, or patents—do not make good collateral. So, banks don’t like to loan money to companies for developing these sorts of assets. That’s opened an entire market for firms that specialize in loaning capital to companies wishing to develop intangible assets. Ownership and control have become the modern alternative to collateral for intangible-intensive companies. Venture capital firms use equity as a form of collateral. They typically enforce their rights through control provisions, like those guarantying them board seats at companies in which they invest. The explosive growth of the venture capital category aligns with the massive development of idea-based organizations.

Tangible assets are called rival goods, meaning they can only be used by one consumer at a time. Intangible assets are deemed non-rival concepts. That means they tend to scale better than physical assets. For example, if you build a tangible asset, like a tractor, it can be used on one farm at a time. Whereas, if you code an application, like Outlook, it can be used by millions of people simultaneously. Financial statements and book value do not reflect this scalability.

Intangible assets are considered sunk costs. Say a software company writes code for a solution to help bagel stores track inventory. If the software company fails, chances are the code will not be useful to other companies or in other industries. Which brings us back to the origin of the collateral challenge and the need for investors willing to accept collateral alternatives in exchange for capital. Book value cannot accurately reflect these risks.

Intangible investments have spillover effects. This means that competitors could benefit from your private investment. For example, Uber created a fantastic network of drivers. It’s their most valuable asset and the core of the business. Yet, many Uber drivers also drive for Lyft. Financial statements don’t account for spillover effects, and it cannot be expressed in book value.

Brand is the face of Intangible Assets

The highest value collection of intangible assets is captured in a subcategory called brand. Brand is the expressed combination of perceptions about a firm’s people, ideas, and conduct. Companies make intangible investments in brand, called branded investments, via categories like talent, R&D, customer support, sales, advertising, and marketing.

New York brand consultancy Tenet/CoreBrand, publisher of the CoreBrand 1000®, estimates that 21% of all corporate value resides in brand.

Generally, experts measure the value of intangible assets with some combination of following three approaches. The market approach considers what a similar brand is worth on the market. On the other hand, the income approach asks: what kind of cash flows do the assets produce? This is the kind of method that makes sense for patents and licenses. Finally, the cost approach considers what a substitute might cost.

Consider the example of Tide laundry soap. The Tide brand was created by Proctor and Gamble in the 1940s, but you can’t find a value for Tide in P&G’s financial statements. It’s not because P&G is a house of brands. It’s because P&G made the investment to develop Tide internally. Like most intangible investments, they were developed in secret to limit the amount of potential spillover to competitors.

On the other hand, when P&G purchased Gillette, in 2005, they paid $57 billion for its brand. That $57 billion included $35 billion in “goodwill,” the historic catch-all bucket for intangible assets, or about 61% of the acquisition cost. That $57 billion did affect P&G’s financial statements (as assets and debt). Strategic events force a reckoning that is not part of normal accounting.

Internally created intangibles aren’t recognized as assets under US Generally Accepted Accounting Principles (GAAP). That is, conventional accounting methods haven’t evolved to measure the value of intangible assets as effectively as tangible assets.

Most of the value in the modern economy is intangible. Familiarity with the unique characteristics of intangible asset capital acquisition, investment, and value measurement will serve investors significantly better than relying on traditional measures of book value alone.

Tony Wenzel  is a co-founder and President of Brandometry® LLC. Wenzel is a software entrepreneur and served as co-founder of Strata Insights, a brand econometrics consultancy. Brandometry created the EQM Brand Value Index, a core, thematic investment index using qualitative brand signals to identify undervalued strong brands. The index can be accessed through an SMA or 40 Act Fund. www.brandometry.net