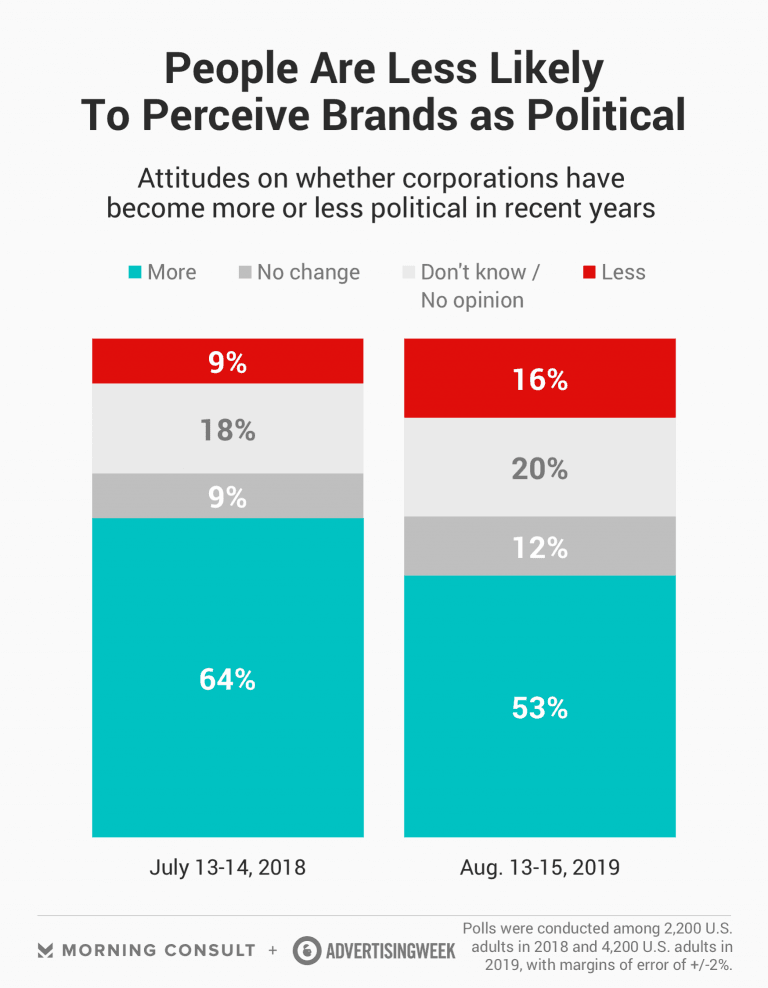 Consumers See Brands Getting More Into Political Activism, And Less In Touch With The Public; Americans Are Twice As Likely to Boycott As They Are to Buycott; The Group Most Likely to Boycott a Brand: Wealthy, Well-Educated Liberals; Gen Z and Millenials Expect More From Brands Than Older Generations, But Are No More Likely to Boycott Brands than Boomers; Engaging With Trump Remains Complicated Tightrope For Brands

New York, NY (September 18, 2019) – Donald Trump fundamentally changed how brands engage in political and social issues. The 2020 election is shaping up to change it all over again. Although consumer sentiment around brands that engage with politics is softening, companies continue to navigate tricky terrain ahead of the 2020 election, according to a new report released today from Morning Consult and Advertising Week.

This in-depth report uses data from over 4,000 interviews with U.S. consumers and examines what consumers want to see from brands when it comes to corporate social responsibility and political activism. The study offers a first-of-its-kind look at what brands can do to election-proof themselves over the next year. Morning Consult will present the data live at Advertising Week New York 2019 on September 26.

"The politics of brands, and the branding of politics, have been re-shaped overnight. With a non-partisan view, Advertising Week is proud to serve as a platform for healthy debate and discussion around the confluence of brands, culture and politics," Advertising Week CEO Matt Scheckner. "Partnering with Morning Consult to provide our industry with the actionable insights needed to navigate the 2020 election is a natural extension of our thought leadership platform," he added.

"The 2020 election is presenting a whole new set of challenges for companies," said Jeff Cartwright, Morning Consult's Vice President. "We are excited to partner with Advertising Week to pull back the curtain on how the current political environment is evolving and what that means for the future of corporate social responsibility and political activism." 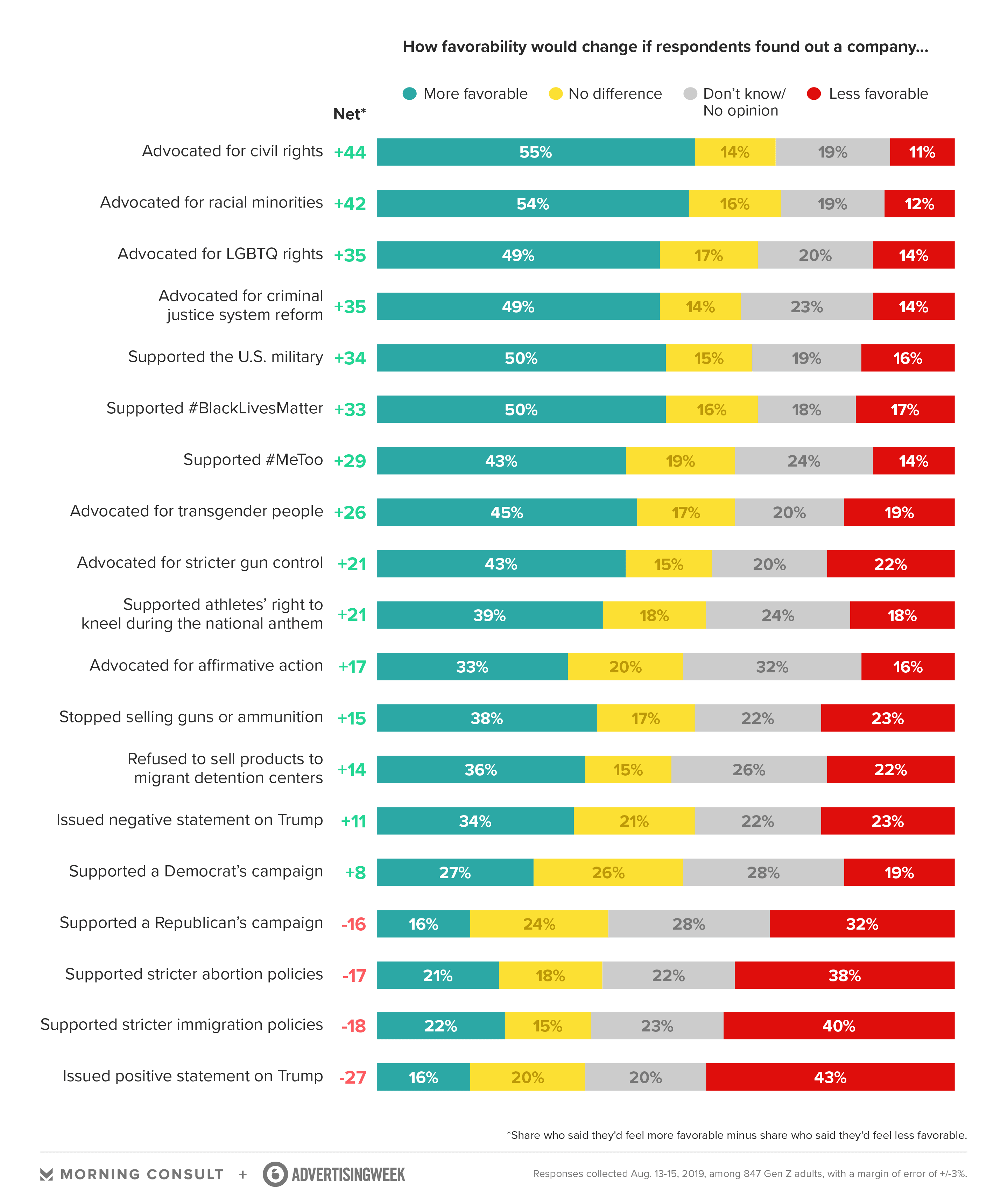 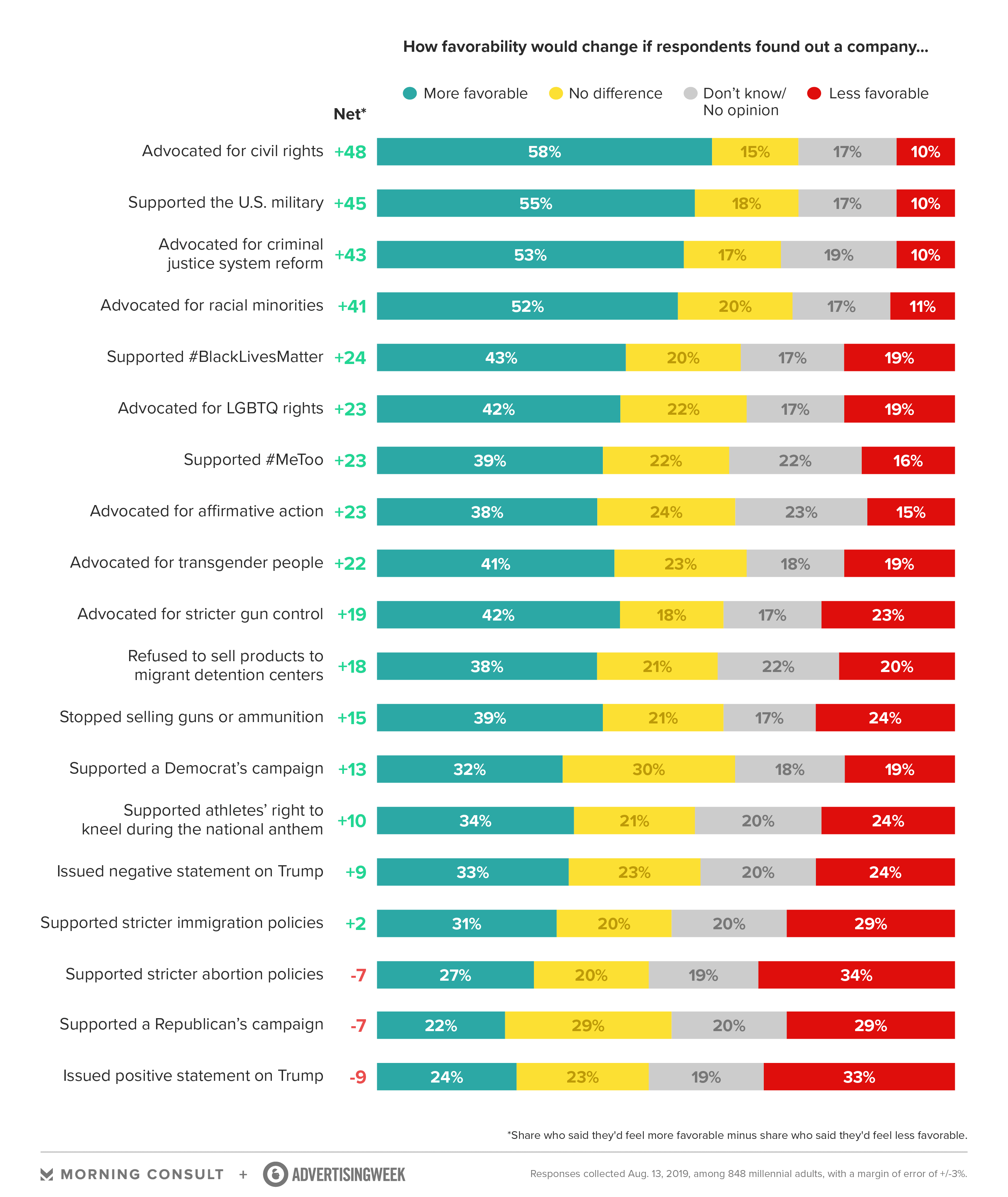 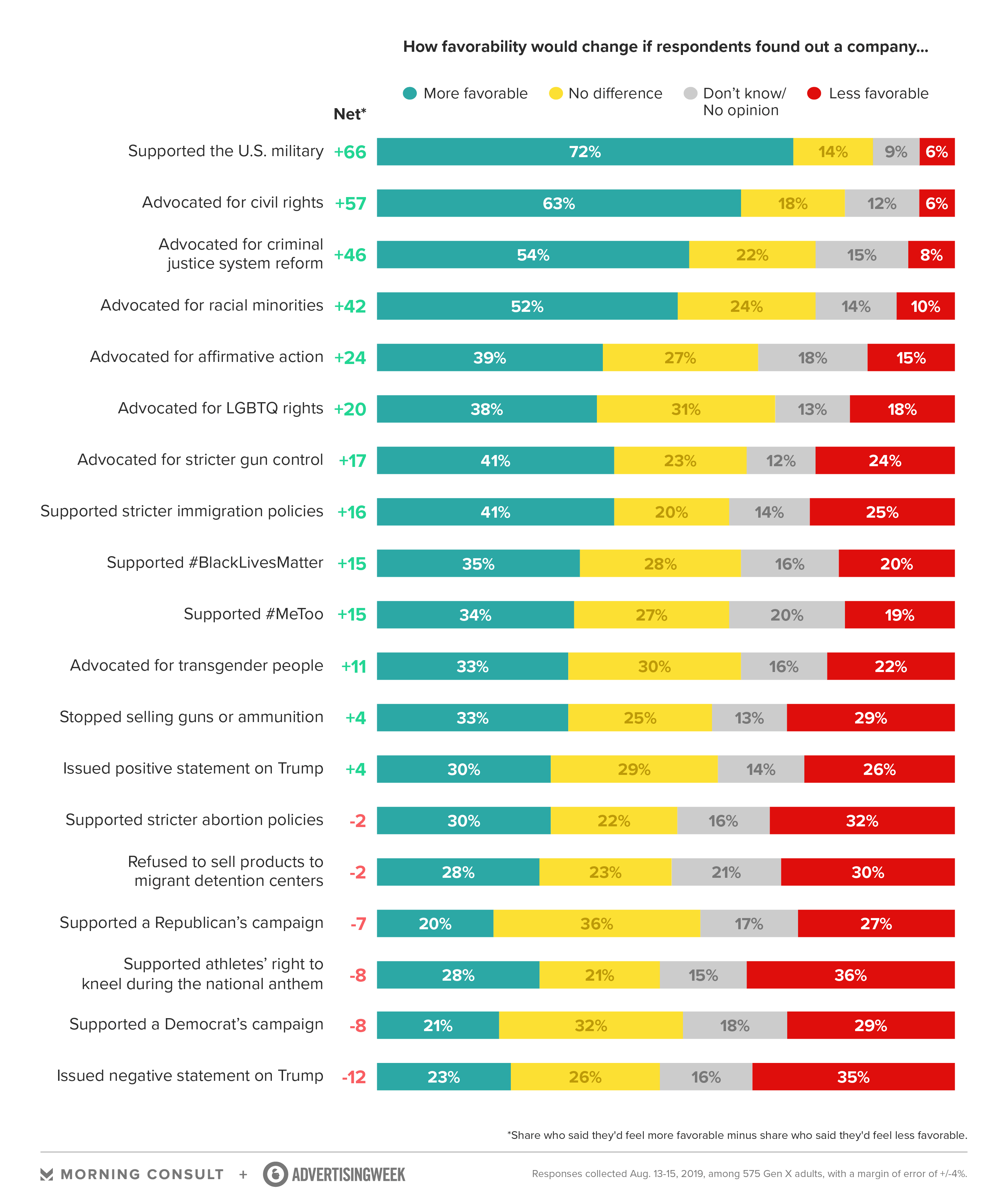 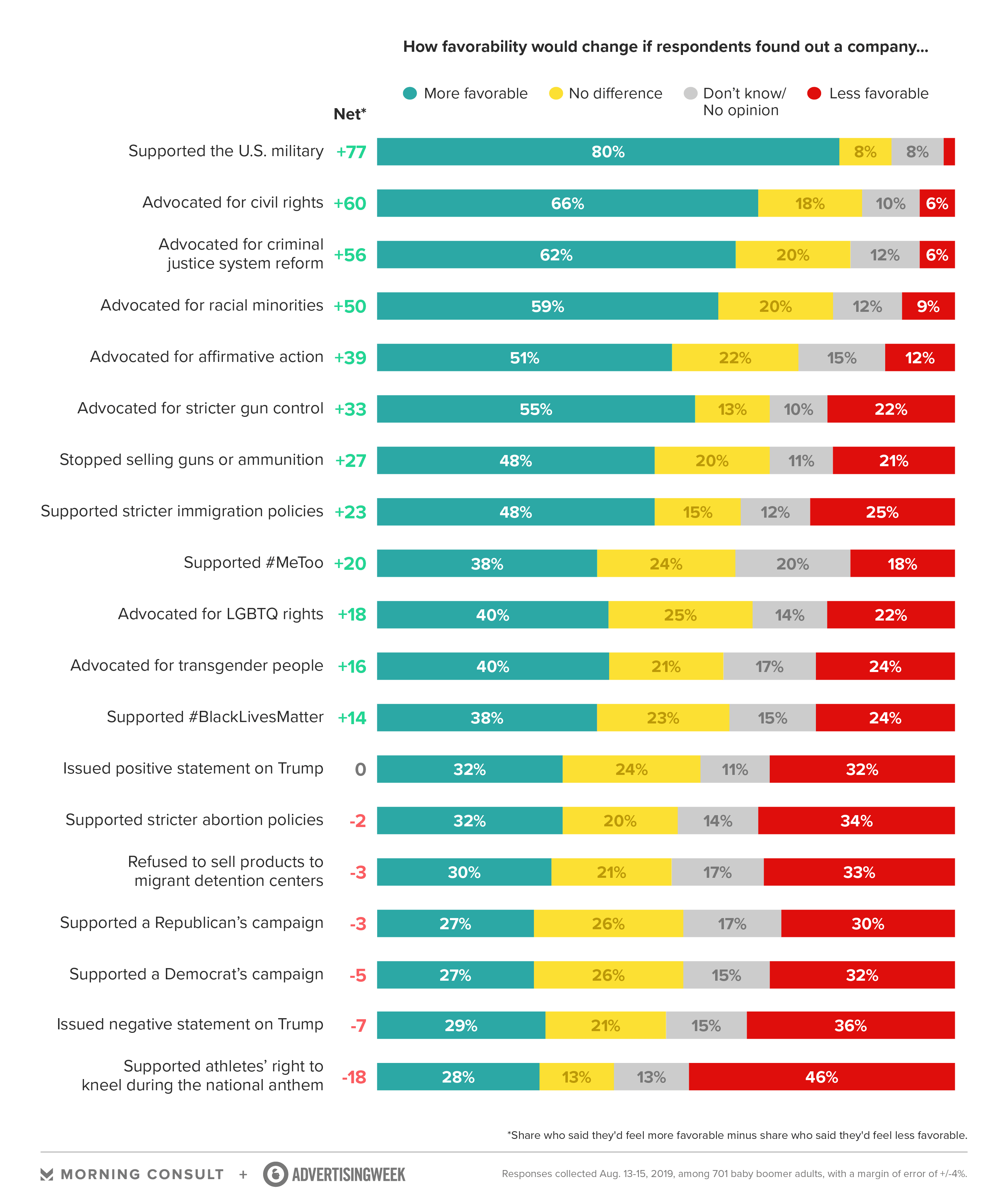 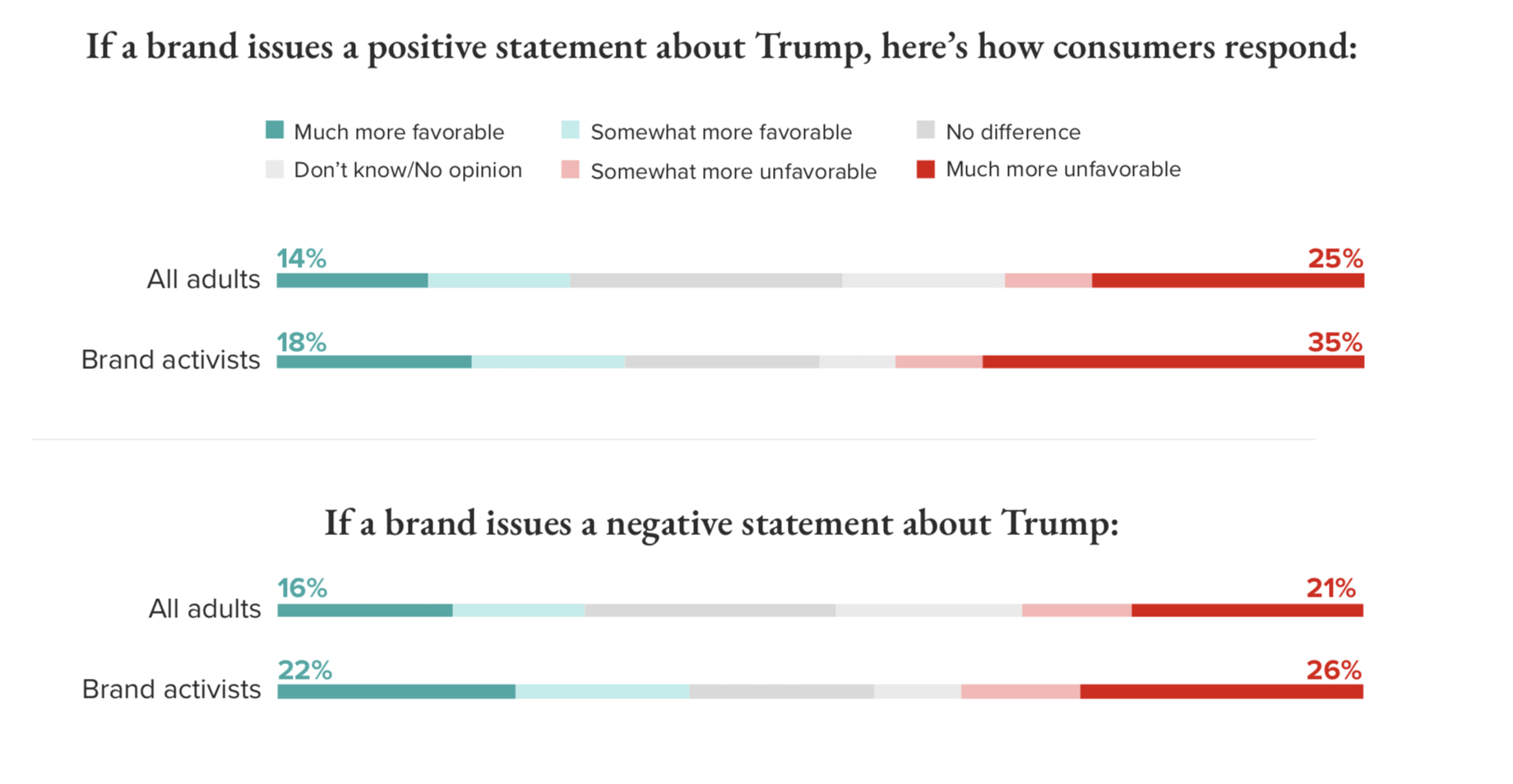 Any references or use of graphics from this report must be credited and linked back to Morning Consult/Advertising Week at the following link: https://morningconsult.com/form/download-2020-survival-guide-for-brands

This poll was conducted from August 13-15, 2019, among a national sample of 4,200 U.S. adults - including an oversample of 1,000 millennials and 1,000 Gen Z adults. The interviews were conducted online and the data were weighted to approximate a target sample of adults based on age, race/ ethnicity, gender, educational attainment, and region. Results from the full survey have a margin of error of plus or minus 2 percentage points.

On pages 17 and 18, the results come from a separate study conducted from August 21-23,2019, among a national sample of 2,000 Adults. Results from the full survey have a margin of error of plus or minus 2 percentage points.

Named one of the fastest-growing technology companies in North America by Deloitte, Morning Consult is revolutionizing ways to collect, organize, and share survey research data to transform how global leaders in business and government make decisions.