Whitney Tilson’s email to investors requesting them to join him at the Stansberry Conference in Las Vegas, October 7-9; and discussing Lumber Liquidators Holdings Inc (NYSE:LL) on a tear; Lessons for short sellers; Don’t use stop losses.

1) On Monday, October 7, I’ll be speaking at the annual Stansberry Conference at the ARIA Resort & Casino in Las Vegas.

I attended and spoke at the three-day event last October and really enjoyed it. Stansberry has a fabulous line-up of speakers who share tremendous insights and a wide range of great investment ideas. You can attend the event in person or watch the livestream – just click here for more details.

2) One of my readers, Steve A., e-mailed me yesterday:

Thx for bringing Lumber Liquidators (LL) to my attention. I owe you one. Up 300%+ on Sept 20, 10 strike call options. Please keep information like this coming!

Regular readers know this was my first stock recommendation back in April – when the stock was trading around $12 – in my brand-new Empire Investment Report newsletter.

As it often happens, I was early... From mid-July to early August, shares were nearly cut in half. All the way down, I pounded the table – first to my subscribers and then to Empire Financial Daily readers – that the sell-off was unwarranted and that the market was making a big mistake.

This story so far reminds me a bit of my experience with SodaStream... It took a huge beating initially before the investment turned into one of my biggest successes ever.

If you just watched the stock price, you would think that the business was completely falling apart, but that's not the case at all. The company is facing tariff, economic, and competitive headwinds to be sure, so it's like a car stuck in neutral – but it's not going in reverse, which is what the stock price is indicating...

Dozens of times in my career, I've owned or recommended a stock in which the financials – and the stock – went into freefall. But a case like this, in which there's a huge disconnect between the stock and the fundamentals, is quite rare. These are the kinds of market inefficiencies where long-term-oriented investors with strong nerves can make big money...

I also plugged Lumber Liquidators on August 15, August 21, and September 4.

Yesterday, the stock closed at $13, up 97% from its lows only five weeks ago!

First, the folks who are short 11 million shares of this stock – 39% of the outstanding shares – stuck around too long and got clobbered (deservedly so).

As a veteran short-seller myself, I speak from experience. I can't tell you the number of times I took a beating by falling in love with a short that was working and failing to take my profits – and then watching the stock rip higher against me.

For an extreme case of this, take a look at the five-year stock chart of Exact Sciences (EXAS), whose primary product is Cologuard, the heavily advertised poop-in-a-bucket colon-cancer screening test. 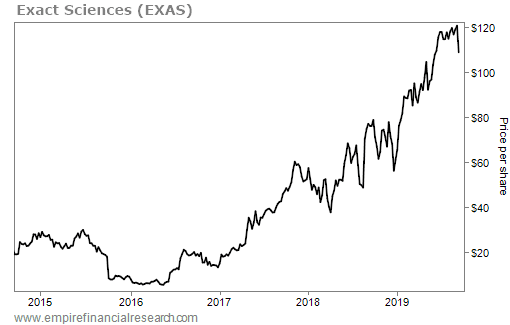 I very publicly shorted it back in late 2014 (you can read my 29-slide presentation here). For a while, I looked like a genius as the stock collapsed from $30 to $5.

But then I should have declared victory and covered my position... Though the company had big losses, it had raised a lot of cash, so it wasn't going away anytime soon. Also, it was growing rapidly, and I had evidence that at least some doctors and patients preferred Cologuard to an expensive, highly unpleasant colonoscopy.

Since then, the stock has been an absolute monster and today is around $111! I got out long ago, but not before taking a painful hit...

4) The second big lesson from the Lumber Liquidators story over the past two months is: don't use stop losses (at least on the long side)!

As I explained in last month's issue of the Empire Investment Report...

With two of our positions down more than 20%, now is a good opportunity to explain why we, unlike many newsletter writers (including our friends at Stansberry Research), don't use stop losses.

Stop losses mitigate risk by capping your losses. It's so easy to get caught in a bad stock, fail to see that it's circling the drain, and not sell it – or, worse yet, buy more all the way down, magnifying losses. Just look at my friend Bill Ackman of hedge fund Pershing Square. He's one of the smartest, most rational investors I know... yet he got seduced by Valeant Pharmaceuticals – now Bausch Health (BHC) – and lost nearly $4 billion!

For these reasons, we understand why some investors choose to use stop losses.

Those who don't use them – like us here at the Empire Investment Report – need to be able to accurately assess the intrinsic value of the businesses whose stocks they own... carefully manage risk... and control their ego and emotions. (We believe that we do all three.)

It's true that stop losses do protect you from withstanding huge losses. The problem is, they also subject you to the mercy of the markets.

I compared them to entering a NASCAR race with a car that can't go more than 65 miles per hour. While you're far less likely to crash, you're never going to win the race, either.

More from the issue...

To quote Ben Graham – the father of value investing and Warren Buffett's teacher – it's critical that "Mr. Market is your servant, not your master." By definition, a stop loss is the opposite... forcing you to do something based on the market's actions.

Stocks can be extremely volatile – sometimes much more so than the underlying value of a business. As an investor, your challenge is to figure out when the market is making a mistake, and take advantage of it. The nature of stop losses forces you to sell at what could be the precise time you should be buying more!

Sure, you'll avoid train wrecks like Valeant... But you'll also miss moonshots like Netflix (NFLX). In late 2011, I started to buy shares after they fell from $43 to $11 (split-adjusted). Over the following year, the stock bounced around. It finally bottomed in early October 2012 at $7.78, down 27% from my original purchase price. If I had used a 20% or even 25% stop loss, I would have sold near the bottom, right before the stock went up more than 50 times in less than six years.

Think about the underlying math... No matter how wrong you are about a stock, you can't lose more than your initial investment, assuming you don't buy more on the way down. But your upside is infinite. (The inverse is true when shorting stocks, so we do recommend using stop losses here.) You only need to find – and hold on to – a few of these moonshot stocks in an investment lifetime to make a fortune.

The odds that you're clever enough to buy one of these stocks right near the bottom is slim. A few years ago at my hedge fund, we bought beverage company SodaStream at $35 a share, then watched it fall to $22, where we bought more. A painful year or so later, it bottomed around $12, where we bought even more. Over the next two years, it soared to nearly $100 before Pepsi (PEP) acquired it for $144 a share.

We knew the company well. We correctly assessed that the problems that were plaguing it (and crushing the stock) were fixable. And because we didn't use a stop loss, we made a fortune on it.

But we never forgot that this was a small, Israeli-based company with a volatile stock, so we also carefully managed risk the entire time. It was part of a diversified portfolio and initially was only a 3% position. Each time we bought it on the way down, we did so cautiously. The decline in the stock price had shrunk the position size to around 2%, and we only bought it back up to a 3%-4% position. Similarly, when the stock started to skyrocket, we regularly trimmed it to keep the position size under 5%. In this way, no matter what happened, this one position wasn't going to dictate the returns of our entire portfolio.

That's exactly what we did in the Empire Investment Report with Lumber Liquidators. Rather than getting stopped out, we took advantage of the sell-off to buy more... lower our cost basis... and hopefully, magnify our returns over the long run. As I wrote...

Had we even used a wide 35% stop loss on Lumber Liquidators, we would have stopped out on August 6 for a 41% loss, keeping us on the sidelines for the solid bounce we've seen already – and the huge returns we're expecting over time.

That said, we recognize that Lumber Liquidators is small and volatile. There's always a chance that we could be wrong – or something could happen with the company to change our investment thesis – so we're managing risk by keeping the position size modest.

If you're not going to use stop losses, you need to manage risk in other ways, namely by controlling your ego and emotions... analyzing companies accurately... and managing your portfolio wisely, appropriately diversifying and using proper position-sizing.

These factors separate the winners from the losers on Wall Street. They're difficult to do well, as they're all judgment calls, rooted in rationality, conservatism, and good information and analysis.

If you're able to do these things, then you don't need to use stop losses... and you can make Mr. Market your servant, not your master.