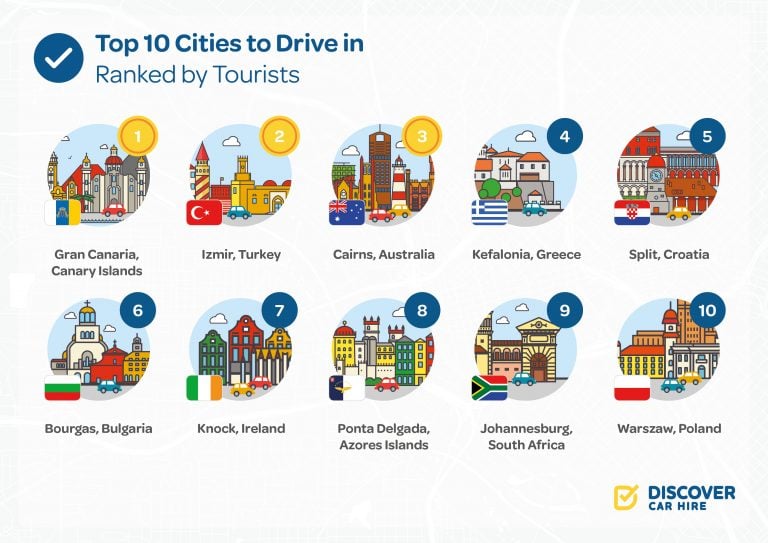 What would be the one city, in the whole world, you enjoy driving in? Would it be the one with bright lights or more peaceful city with panoramic views?

A car rental company, Discover Car Hire, thought it’s a good question to ask tourist drivers and decided to interview 2,500 of them.

Here are the results.

Looking at the most popular cities, one of the three highest-rated scenic drives are in Izmir, on Turkey’s west coast. The other two cities are Cairns, on Australia’s east coast and Gran Canaria, one of Spain’s Canary Islands. All three destinations received a staggering 9.7 satisfaction rating (out of 10).

In fact, the research shows that island driving is one of our favorite things to do. Of the top 20 best places to drive in the world, six are island destinations, including destinations on the Canary Islands, the Balearics, the Azores and Cyprus.

Ponta Delgada, the capital of São Miguel in the Azores, is one destination cited time and time again as a firm favorite. With its whitewashed buildings, narrow cobbled streets and crystal clear waters, a staggering 105 people surveyed gave Ponta Delgada an average score of 9.6 city driving satisfaction.

Having a car gives the freedom to drive between cities and explore countries in their entirety. The research uncovered the countries that offer the highest number of top city driving experiences:

Interestingly, Italy tops the poll, with seven of its city destinations achieving a satisfaction rating of 7.5 or higher out of 10, including Milan, Venice and Rome.

And Spain is joint top, with mainland destinations such as Barcelona and Malaga appearing alongside its islands as firm customer favorites.

Least favorite cities to drive in

When it comes to the not so favorite cities, the least popular to drive in is Dubrovnik in Croatia. The city received the lowest score of 6.7.

Dubrovnik is followed by London with 6.8 rating and Glasgow (7.3). The data show that out of the lowest-rated cities two are in the United Kingdom.

Dmitrijs Zaznovs from DiscoverCarHire.com said: “Overwhelmingly, our research has shown that drivers care about beautiful surroundings and scenery, with coastal roads and picturesque countryside helping to create memories that will last a lifetime.

“Respondents also said that the quality of road surfaces (e.g. lack of potholes) and ease of driving (for example, good signposting and easy navigation) all contributed to their top experiences, as did being able to hire a car quickly and efficiently when arriving at an airport.”

And what do we like least about city driving? Poorly maintained roads, angry local drivers and difficulty in finding a parking space!