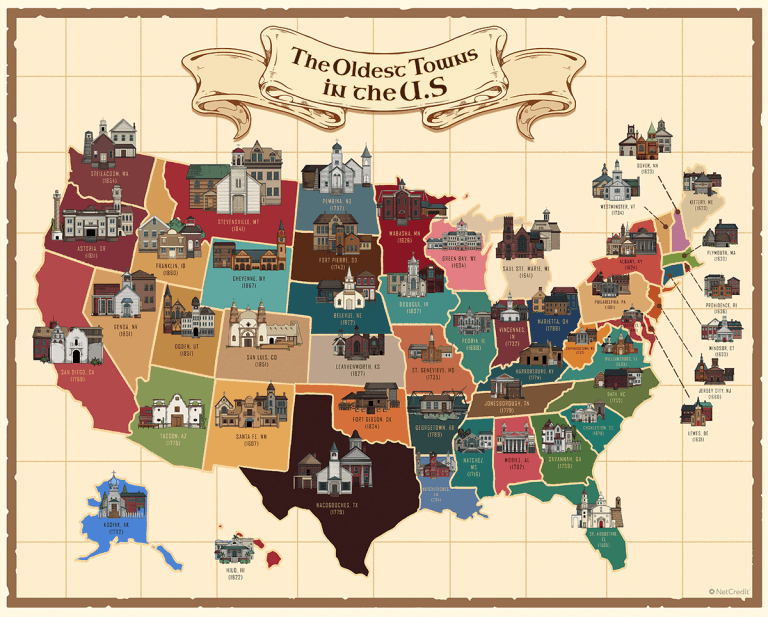 The USA is a young nation on very, very old land.

Prehistoric humans may have lived there as long as 130,000 years ago, according to researchers. A more conservative estimate is 15,000 years – with genetic studies suggesting that the ancestors of today’s Native Americans travelled across the Bering Land Bridge from Siberia ten to fifteen millennia ago.

In comparison, European settlers established the USA as a nation less than a quarter of a millennium ago, just three centuries after the land was 'discovered' by the Italian explorer Christopher Columbus. Part by accident, and mostly by design, the ‘discoverers’ and founders of the US killed so many indigenous people that it had an effect on the global climate – because the abandoned farms of the dead were reforested, causing a massive dip in carbon dioxide.

The oldest town (surviving) from this period is St Augustine in Florida, which was established by Spanish explorer Don Pedro Menendez de Aviles in 1565. The town is named, somewhat innocently, after the patron saint of brewers. The folks at NetCredit have created a captivating set of posters telling the brutal story of the colonization of the Americas, through the oldest surviving town in each state.

They started by identifying the longest continuously-occupied European settlements in each of the 50 states. Although they were searching for the moment that towns were chartered or founded, their final judgement on the date of each town was based on when people created the settlements rather the ‘official’ date the town was established or incorporated.

A lot of towns are proud of their long-running heritage, and in many states there is more than one place that claims to be the oldest – in these cases, the researchers had to make a judgement call after assessing their sources.

The designers make it clear that these are the oldest towns of European settlers. The project doesn’t include older native settlements, although there were very often indigenous people living on this land before the colonists staked their claim.

For example, the area around Santa Fe - New Mexico’s oldest town – was home to Pueblo Indians such as the Tanoan and Tewa peoples before the Spanish arrived. European soldiers and missionaries tried to conquer and convert the locals, until the Pueblos finally had enough and revolted, burning much of old Santa Fe (except the Palace of the Governors) and restoring it as an indigenous province until Don Diego de Vargas reconquered the area in 1692.

Kittery in Maine was first settled in 1623. This area’s former name was Amiciskeag – meaning “fishing point” – in the Algonquin dialect. Natives and colonists lived in relative peace for some years, but eventually the demands, expectations, and brutality of the settlers proved too much, and ‘King Philip's War’ broke out between the Wampanoags and their allies, versus the colonists. Over a three-year period, there were thousands of casualties in each side – mostly the side of the Wampanoags.

This was the first time the New England colonists had faced such a conflict without support from the outside, and it marked a turning point in ‘American’ attitudes to the land they had colonized and their independent status. But there would still be further battles between rival colonists in the area for many years.

Likewise, the area around New York state’s oldest town of Albany was the site of fierce rivalry between colonists competing for the fur and other trades. The Mohawk, Mohican, and other groups were drawn into years of violence perpetuated by the white attitude of solipsism and unfettered greed that still defines much of the way business is conducted in the United States today.

Colonists brought disease and destruction to the Windsor, Connecticut area, too, as early as the 1630s. Again, indigenous people were caught up in the literal crossfire between competing European trader-settlers. In one particularly cruel and stupid incident, Dutch traders attempted to team up with local Native Americans against their rivals the Puritans but inadvertently passed smallpox onto their new ‘collaborators.’

Because the immune systems of these native Pequot people were unacquainted with the disease, many hundreds of them (the majority in the area) died over the next few years as the disease spread, receded, and resurfaced. Disease was further spread by Jesuits who travelled from tribe to tribe to forcibly baptize the Native Americans, and also intentionally as a form of biological warfare. Ironically, European Christians and ‘men of god’ would claim that the locals’ fate was a judgement and decree from above. The degree to which they actually believed this, and the degree to which it was just a convenient way to excuse the most cynical form of colonization, will never be fully known.

The Tuscarora War was fought around the area of Bath, Carolina, between 1711 and 1715. Tuscarora Indians had lived in relative peace with settlers for some years, but for every inch the natives offered, the colonists took a mile. Colonists annexed land, raided Tuscarora villages, and kidnapped the Indians to force them into slavery. Disease also took its toll. The Southern Tuscarora, formed an alliance with the Pamplico, Cothechney, Coree, Mattamuskeet, and Machapunga people, and attacked the town of Bath in 1711, just six years after it had been founded. Ultimately the settlers prevailed and the rightful inhabitants of the land were mostly exiled, migrating to the New York area to pool their strength with Iroquoian peoples.

These are the early days of some of the oldest towns portrayed in the new poster set. The official websites of these towns rarely tell the full story, because history is written by the winners. But the foundation of the United States in the Americas is a short and brutal story at the end of thousands of years of civilization on this land. It serves as a reminder to conduct one’s business with a personal sense of charity, restraint, and empathy, and not to depend upon the edicts of the church to justify aggressive growth and development tactics.