ValueWalk
Home Technology Which Countries Are Requesting Your Data From Big Tech?

When we all signed up to get accounts with the hottest new social media sites and other tech platforms, how many of us thought about what information we were giving them – or what they would do with it afterwards? Unfortunately, very few of us thought about that until it was too late and that data was already being used in ways we couldn’t have imagined. Even now, after all of the controversies and headlines, there’s still a lot we don’t know about how the likes of Google, Facebook and the rest use the data that we’ve given them over the years. Something that has changed is that they now publish transparency reports, which provide information about countries that have requested data from them and how times they complied with those data requests.

However, the existence of these reports doesn’t mean that we’ve actually read them, so most of us are still none the wiser about how our data is being given out and to whom. That’s all changed now though, with the creation of these images, which show exactly what you need to know about your data:

Which companies are sending data requests - and to where?

So, if you live in the United States of America, you’ll be at the top of the list for all of these companies, but you can also see who has been sending data all around the world, with Facebook and Apple’s maps particularly busy, and Google not far behind. 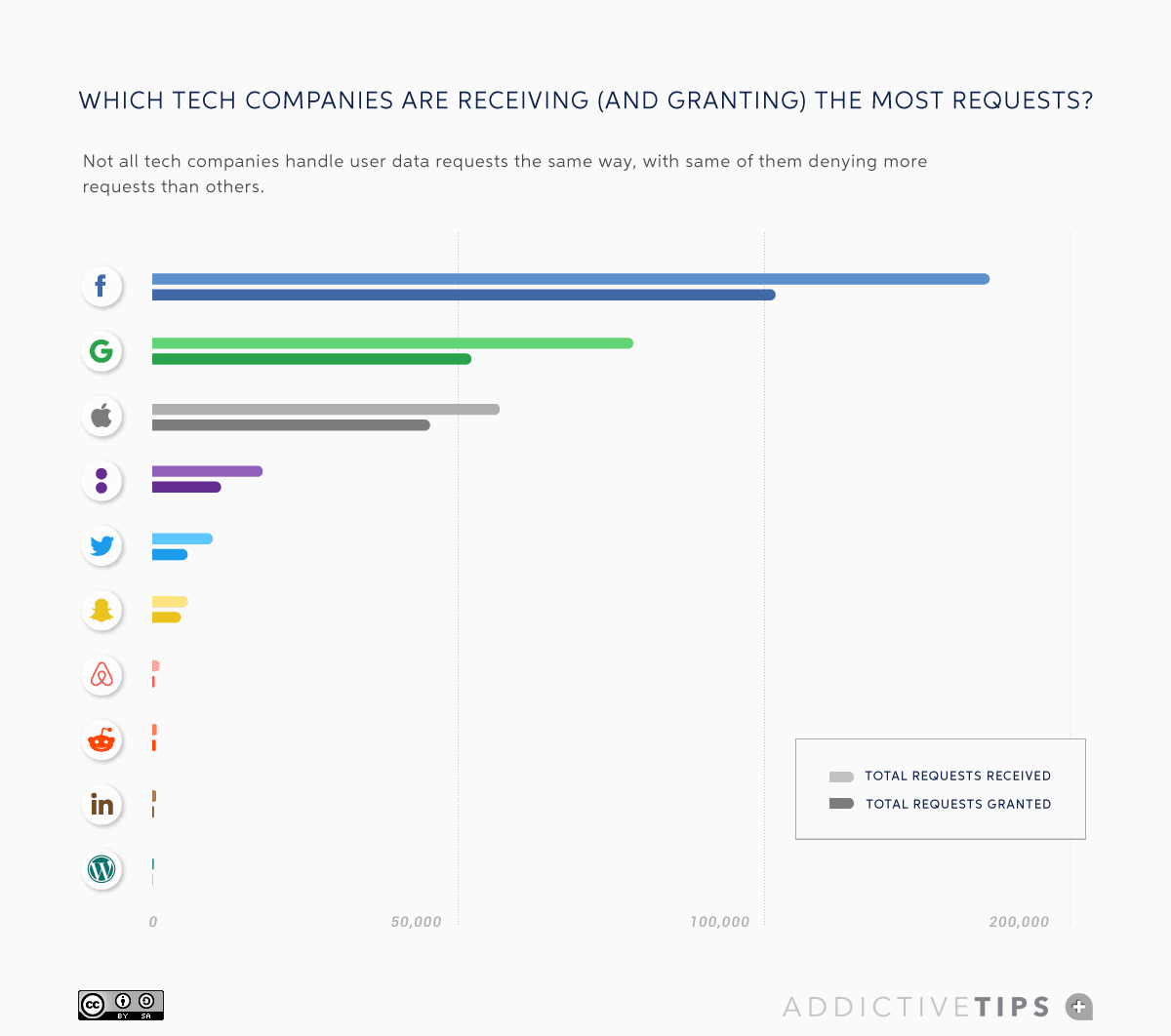 Which companies are sending the most data?

While those maps are certainly a great way to visualize where the data has been flowing, these charts offer a clearer picture of how many requests each of the tech giants received and also how many of those requests were granted. So, while Facebook is clearly the company that sent the most user data, it also received a lot more requests than it granted.

Google and Apple are the next biggest, but the second chart is particularly interesting as it shows the percentage of requests that were granted, with Apple and Snapchat the two most likely to send your data. Meanwhile, the likes of Twitter and WordPress only grant just over 50% of requests and Airbnb only granted around 33%. 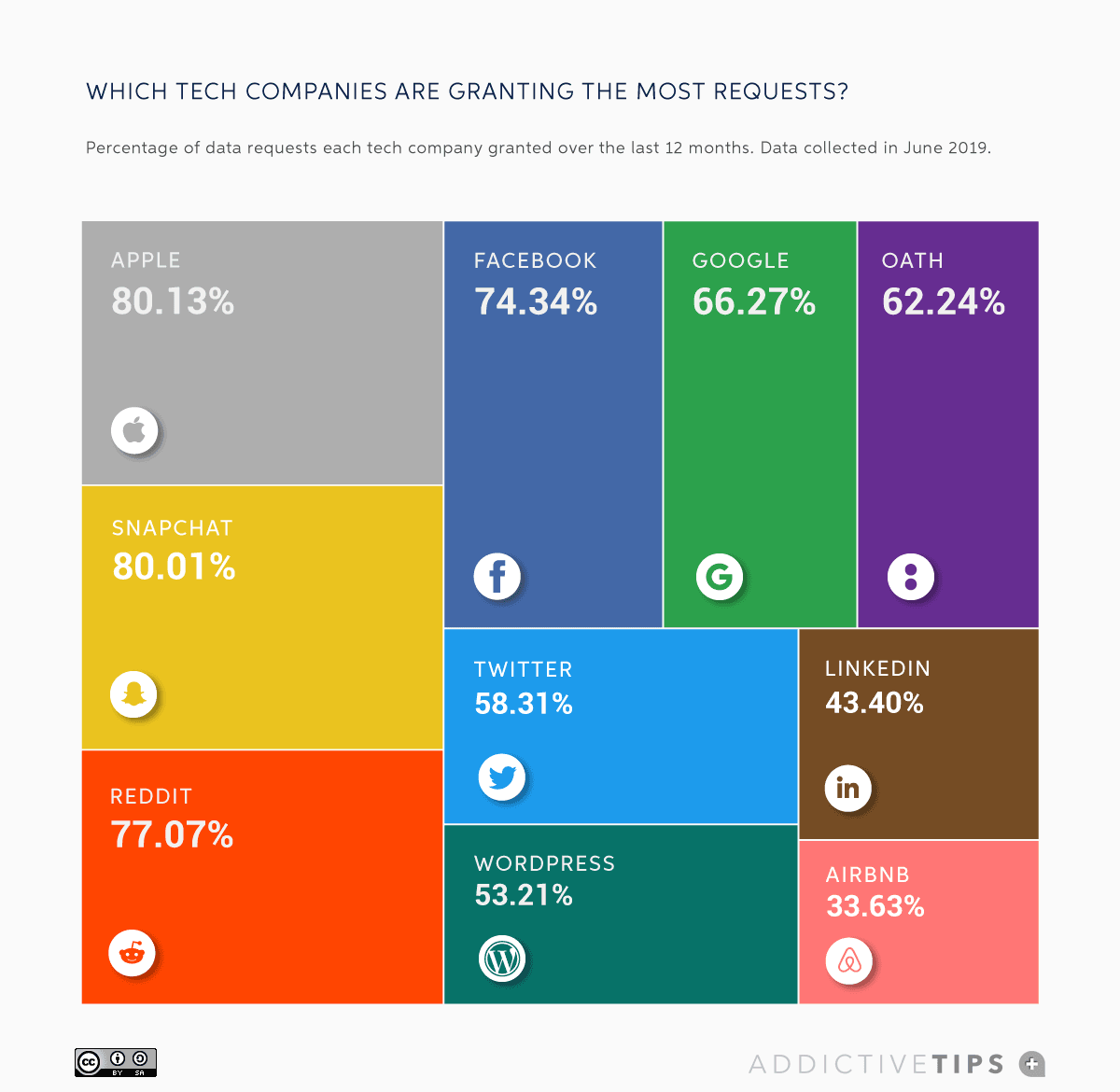 Which countries are requiring the most data requests?

If you’ve seen any of the other images so far, you’ll probably have guessed that the United States of America will be the country that has requested the most data, but even so, the incredible distance by which it leads all of the other countries is really illustrated here. With over 150,000 requests, it has well over twice as many requests as second-placed Germany, while the likes of India, the UK and France trailing even further behind. What is interesting to compare here is which companies dominate each bar, with Facebook making up a large chunk of the US requests, while Apple is the biggest for Germany. 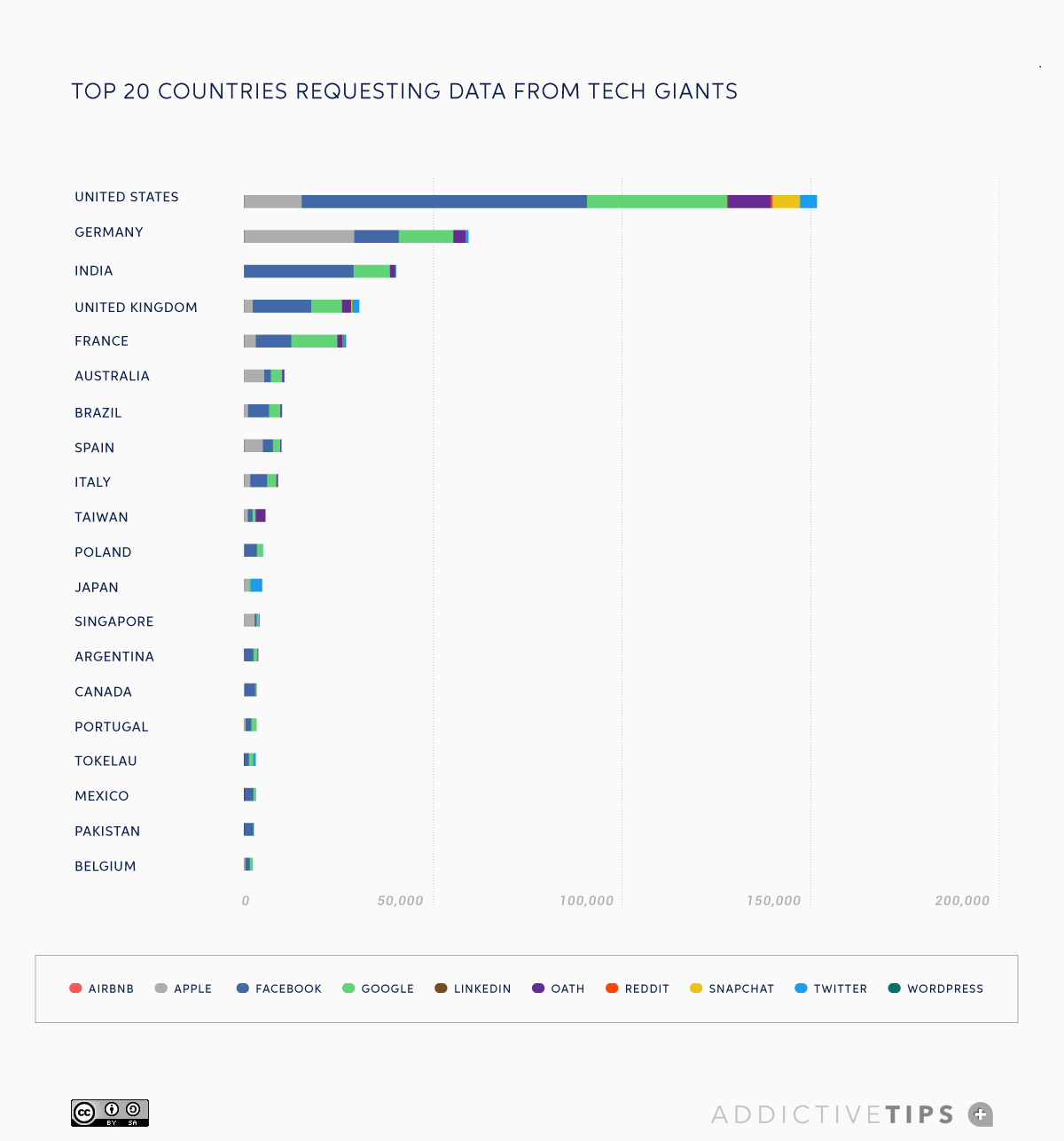 Which continents have the most data requests?

With the USA’s huge dominance of the data requests globally, it’s no big shock to see that North America is also the continent with the most requests, but as the previous chart showed, many of the other biggest requesters of data came from Europe. They may only add up to 144, 453 requests, which is fewer than the USA on its own, but it’s still interesting to see the spread of requests across Europe. 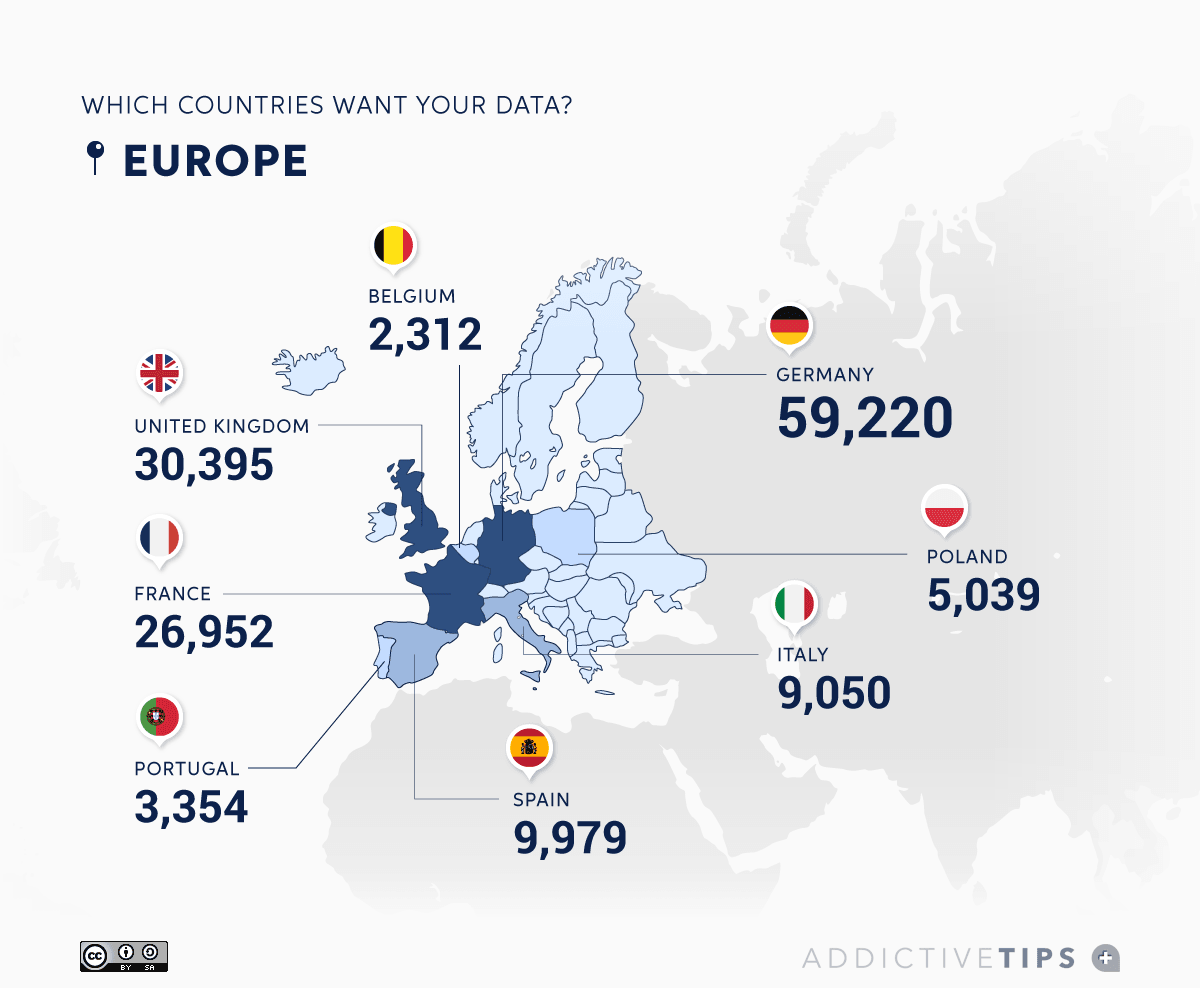 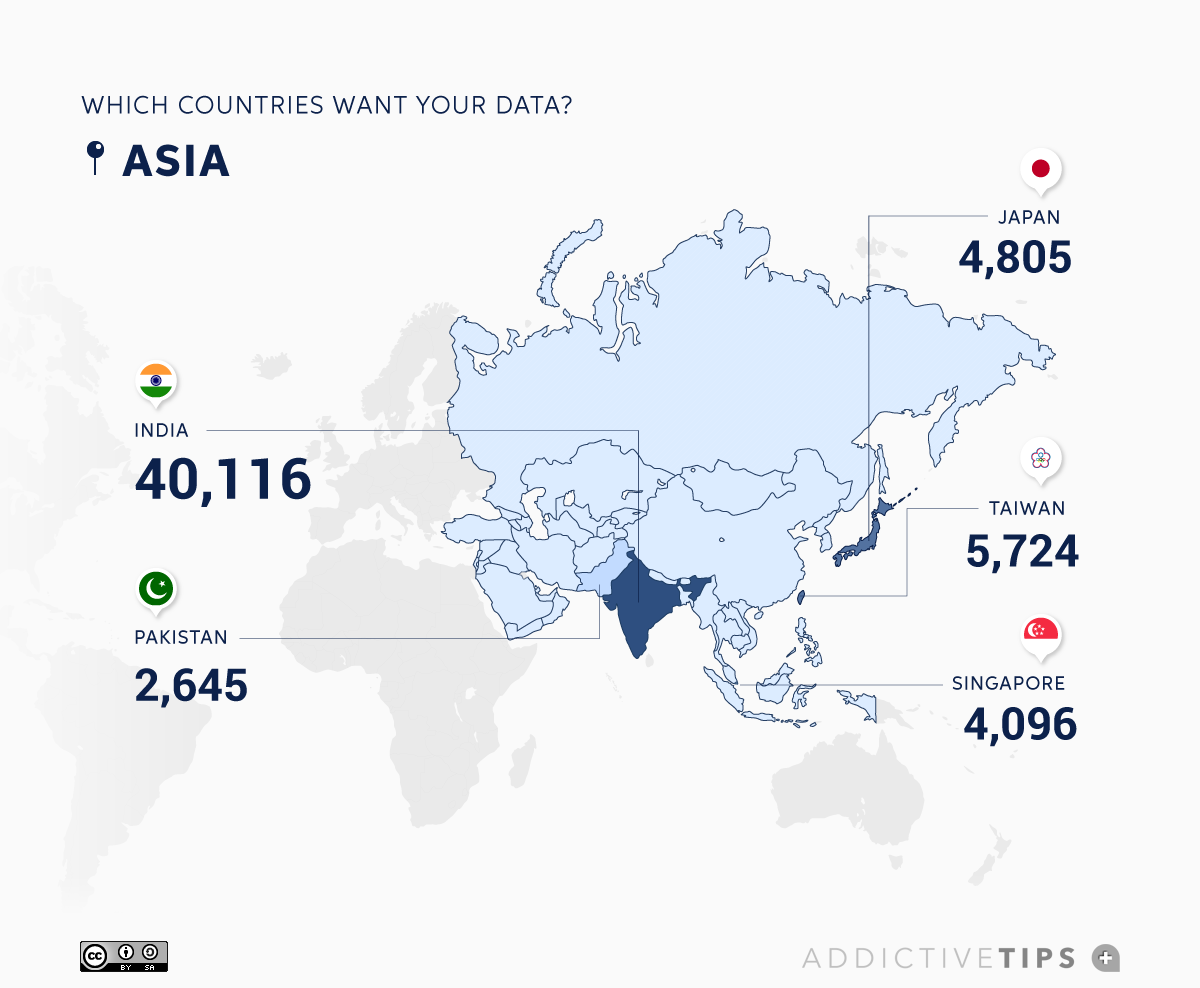 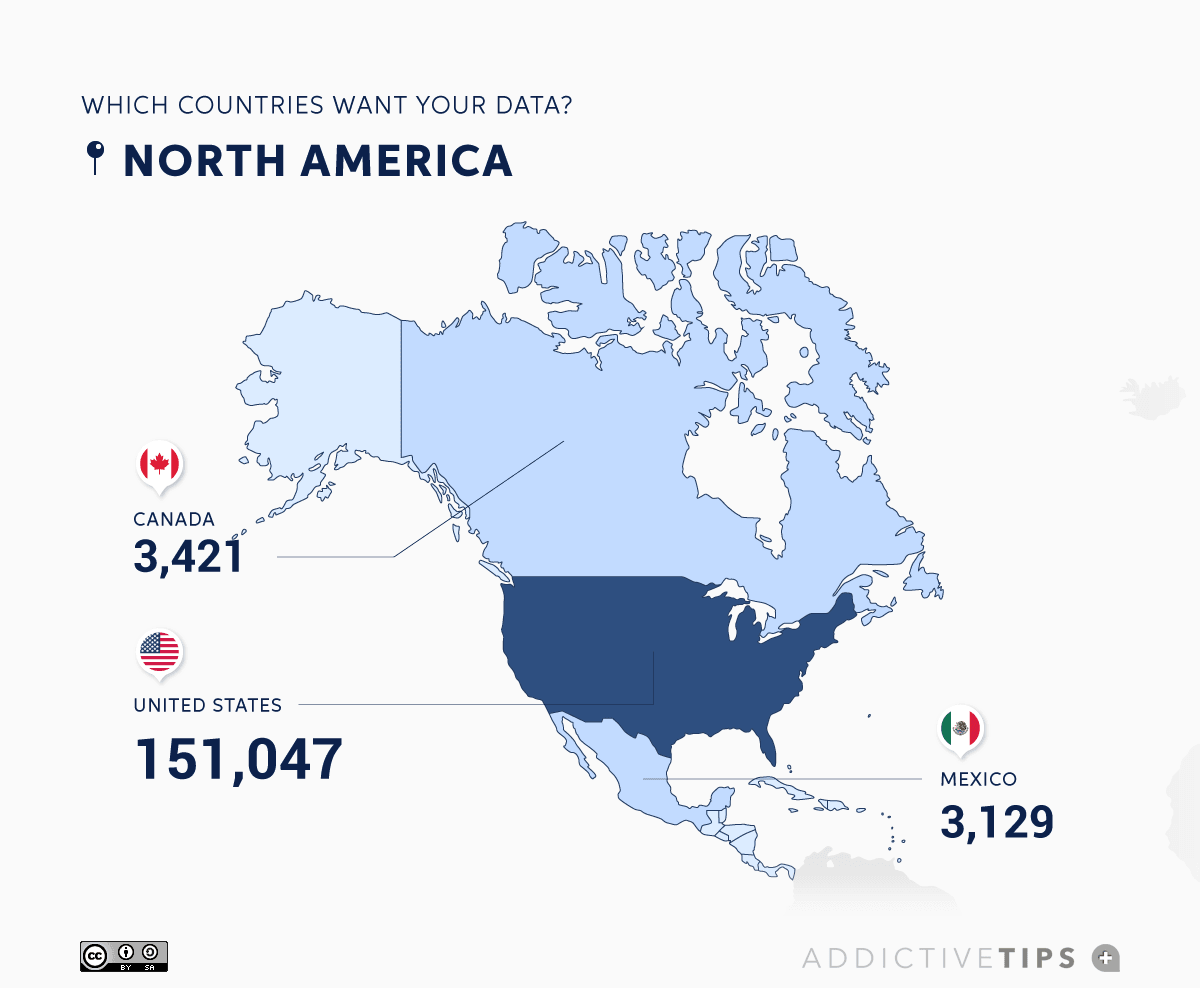 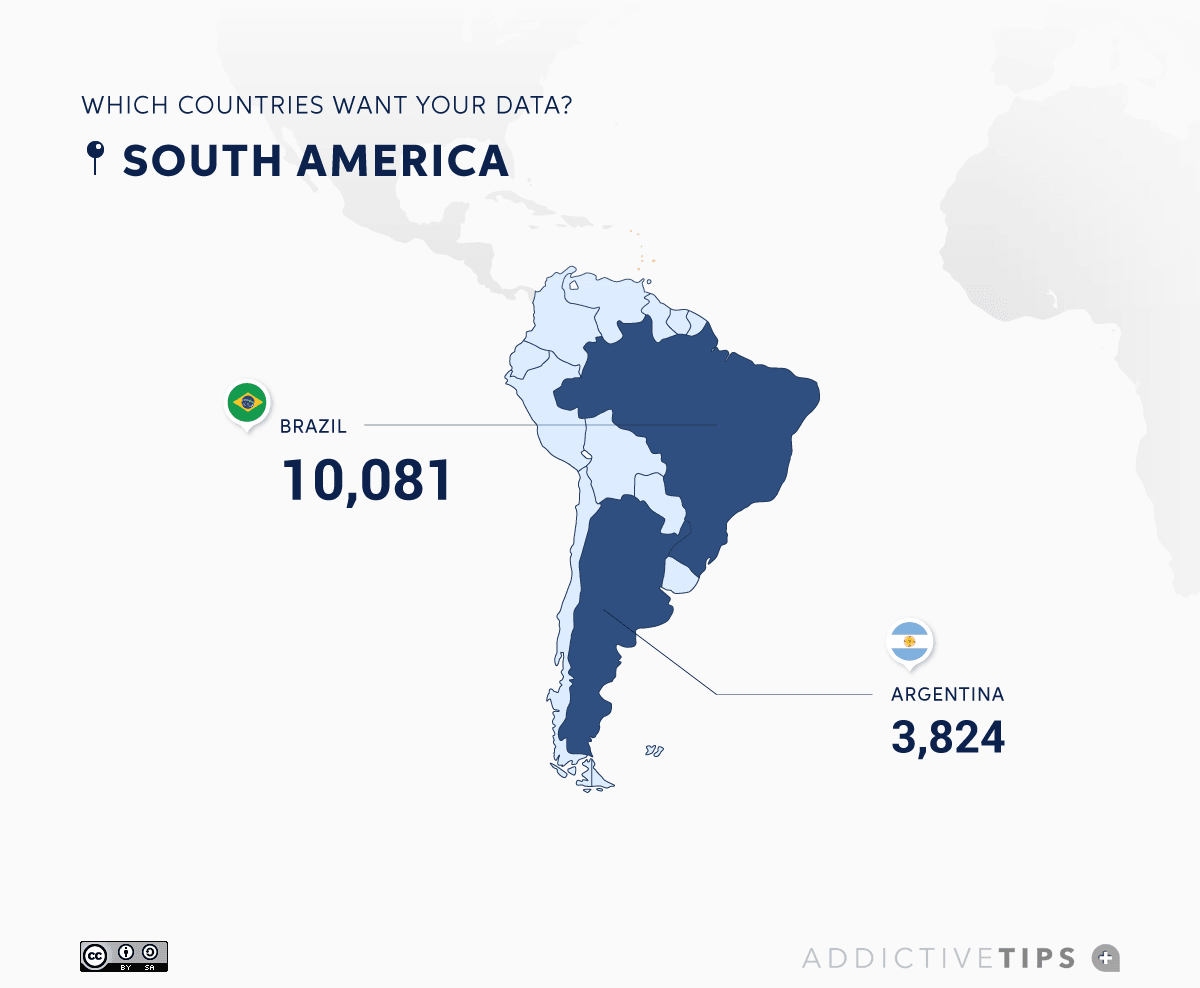 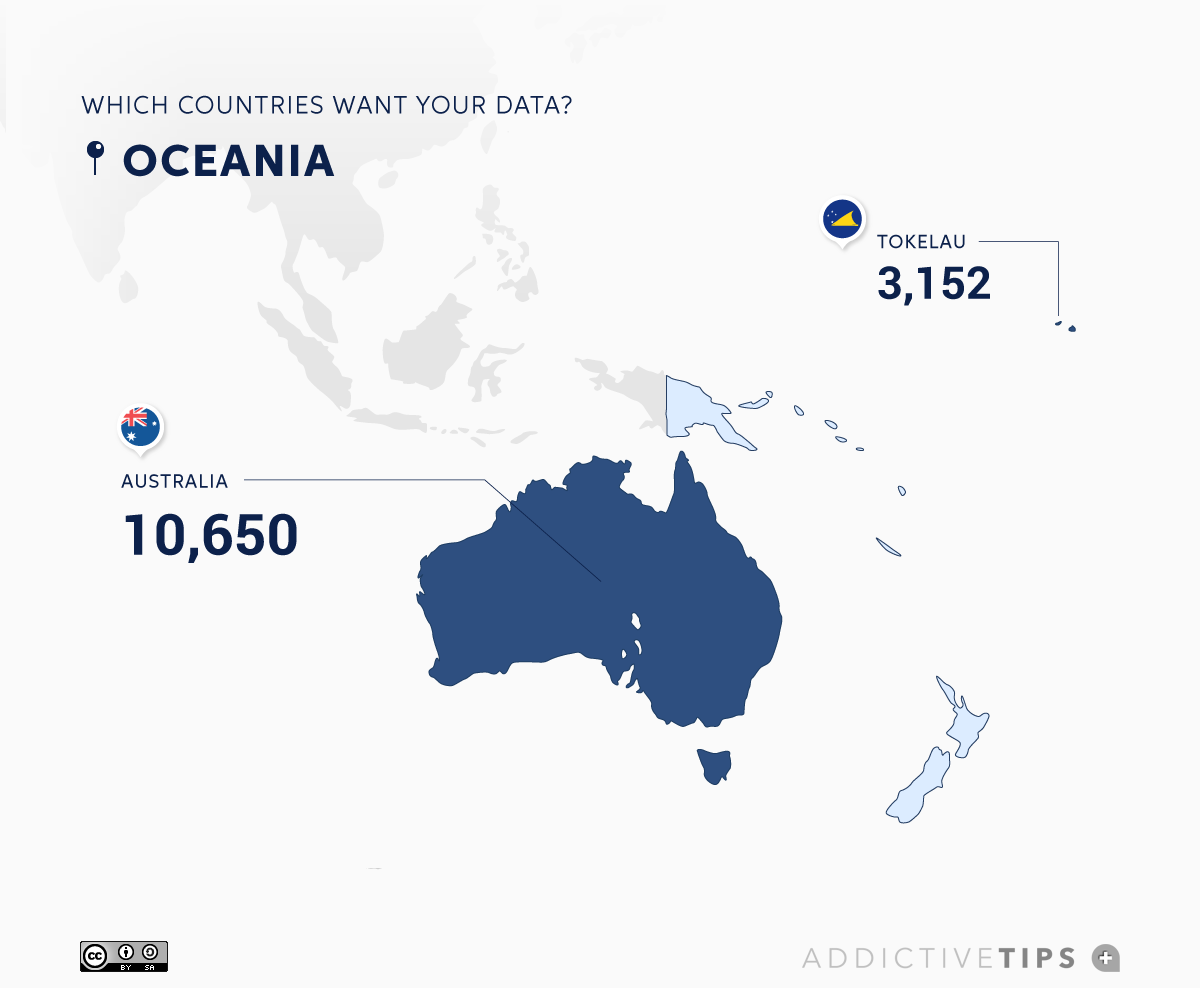 How have data requests changed over the years?

It might be strange to think that these tech giants are still so comparatively new, but this chart shows exactly how long they have been receiving data requests. Even as recently as 2010, there were a fraction of the number of requests, before things exploded into life in 2013 with many more requests for Facebook and Apple joining Google.

Interestingly, while the chart shows dramatic growth every year after that, there was actually a drop in 2018, presumably because of an increase in data protection laws causing both governments and companies to be more cautious about what requests are made and granted. Whether that continues remains to be seen. 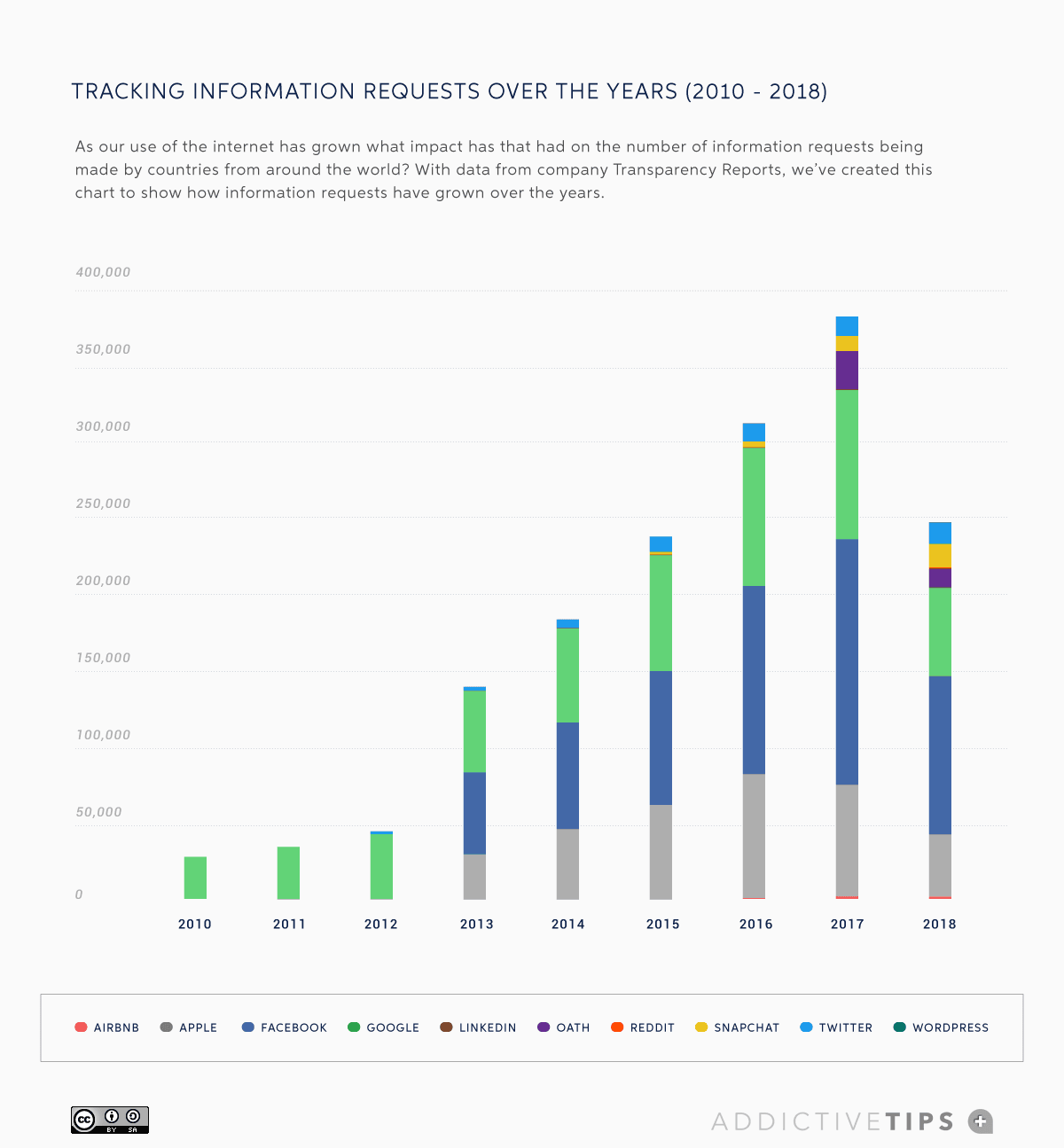 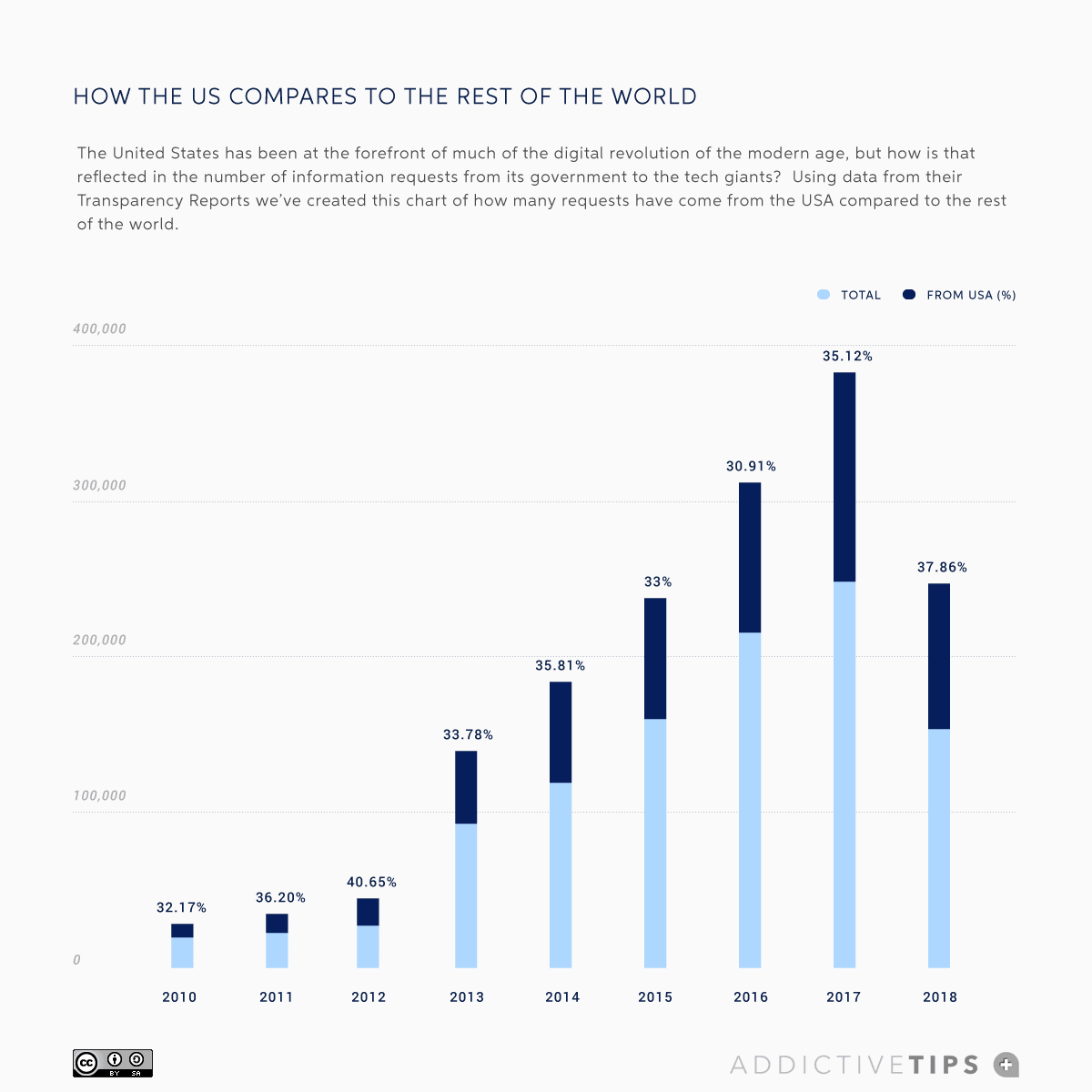 The USA vs Rest of the World

We’ve mentioned the United States and its dominance of the data requests charts. Whether that comes down to political factors or the reality that these companies originated in the USA and became well established there before spreading around the world, it’s hard to say for sure. What can be seen in this chart is how disproportionately it features every year compared to the number of requests coming from the rest of the world.

So what does the future hold for how our data gets used? Scandals like the Cambridge Analytica saga have made us all much more aware of how the data we give to social media and tech giants can be used without our knowledge, but that hasn’t stopped us using them. Will increased regulations protect our privacy with regards to data requests or has the horse already bolted? Only time will tell, but it will be very interesting to see how charts like these develop in years to come.