ValueWalk
Home Info-Graphs 60% Cant Come Up With $400, Yet Gig Workers To Outnumber Traditional... 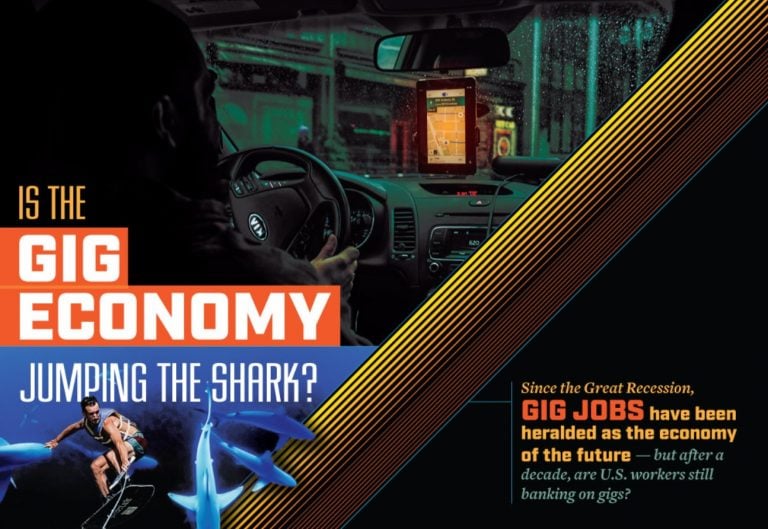 It’s very likely that if you’re not already in the gig economy, that you know someone who is. Whether they be a freelance artist, an Uber driver, or some other kind of independent contractor, they are one of the 75 million U.S. gig workers. Since the Great Recession, gig jobs have been viewed as the economy of the future. Many people were searching for a quick-starting job to save them from participating in the rising unemployment levels and in the decade since, the gig economy has expanded at an exponential rate. Now, with the job market finally recovering, those working in the gig economy feel less incentive towards gig worker assignments.

As gig providers feel the impact of a retreating workforce, some are trying to keep up with traditional employers by offering rewards programs for their freelancers, but their efforts may be too little too late. In April 2019, the U.S. unemployment was half of what it was in the midst of the Great Recession causing the demands and incentives for the temporary gig job to decrease. Workers may have realized that gig jobs cannot replace traditional work and that remaining in the gig economy is not possible. The lack of minimum wage regulations or benefits have contributed to some gig-providing companies 500% yearly turnover.

The number of freelance workers is predicted to surmount traditional workers by 2027, with an increase from 57 million to 87 million gig workers. Even with these predictions, gig workers are struggling. People join this economy for a quick opportunity to create earnings, but 60% of gig workers couldn’t even come up with $400 for an emergency bill. It’s increasingly popular to know someone who works in the gig economy. 23% of workers aged 55-64 consider themselves independent contractors, while 47% of Millennial workers do some kind of freelance work. This category of work is attractive not only because of the quick-start reputation, but also due to its flexibility and freedom that it provides. But with so many joining the gig economy, there may not be enough room for everyone to reap the rewards.

It’s a tough gig becoming a freelancer or individual contractor. With gig jobs comes the potential of financial detriments such as lack of benefits, unpredictable income, and impermanence. Many workers do not earn a living wage, according to the median monthly income. The future of the gig economy remains uncertain as the job market recovers.

Learn more about the rise of the gig economy and its impairments from the infographic below.