ValueWalk
Home Economics Survival Of The Fittest In Hedge Funds 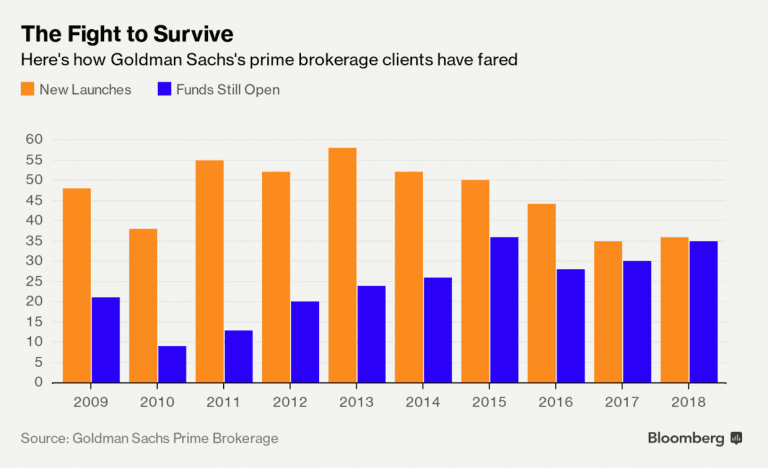 Whitney Tilson’s email to investors discussing a study on what does it take for a new hedge fund to make it? $250 million; more on Elizabeth Warren; private prisons; his stint in jail.

1) An interesting study that’s consistent with my observations and personal experience: What Does It Take for a New Hedge Fund to Make It? $250 Million. Excerpt:

For a baby sea turtle there's a 1 in 1,000 chance of making it to adulthood. If you're starting a hedge fund, the odds may look just as daunting.

Only the fittest survive in the fund business – and that means starting up with at least $250 million, according to a report from Goldman Sachs Group Inc. that's making the rounds on Wall Street. It's a tough bar, made all the more challenging by today's volatile markets, mounting set-up costs and investors who are tightening their purse strings.

How tough? Of the 468 U.S. hedge funds that have used Goldman's prime brokerage services since 2009, almost half are out of business. The majority of those funds shuttered in the first three years, according to the bank's report, which was originally published in January.

I remember when I started my first hedge fund on January 1, 1999 with a little more than $1 million of my own money and a handful of intrepid investors (including my parents, in-laws, three friends, two cousins, the brother-in-law of a business school classmate and the parents of another, Harvard Business School professor Michael Porter, Bill Ackman, and his dad).

Without a day of experience in the financial industry, I had no business managing anyone else's money, much less starting a fund. But I sought wisdom from the right mentors (Buffett, Munger, Klarman, Greenblatt, Ackman, etc.), worked hard, learned fast, and – this is key – had a tailwind.

Hedge funds were the sexy, shiny new thing and it wasn't too difficult to persuade people to take a flyer on one.

My, how times have changed!

Hedge funds are mostly dog meat these days, with their high fees and terrible underperformance amidst this decadelong bull market, which has been driven by a handful of moonshot (mostly tech) stocks. It has been the worst kind of market for stock pickers, especially value investors, and worst of all for anyone with a short book.

Here's the harsh reality for most eager beavers looking to start their own funds these days: instead of a healthy tailwind, like the one I benefitted from, there's a stiff headwind. This doesn't mean all start-up funds are doomed, but the odds are slimmer, so aspiring investment managers need to be even more skilled, experienced, and capitalized.

2) Yahoo Finance this morning published the story I included in yesterday's e-mail about my kerfuffle with Elizabeth Warren: Why I'm glad Warren is running despite my run-in with her. I added these two paragraphs at the end:

I think she was genuinely sorry about what she'd written, both because it was incorrect, but even more importantly because it's simply inappropriate for a powerful public figure to attack a private citizen. To my knowledge, she has never repeated this mistake (unlike President Trump, who regularly disgraces his office with this kind of behavior).

While I haven't endorsed Sen. Warren's presidential bid (Cory Booker is an old friend and I think the world of him, so I'm supporting his campaign), I'm glad she's running and getting traction. While she's been in an elite world for many years now, she comes from extremely humble origins. She grew up in Oklahoma in a family clinging to the bottom edge of the middle class, so her concerns about average Americans come from deep in her heart I think. And unlike most candidates, she's put forth a slew of detailed ideas, which is to be commended whether you agree with them or not.

3) I recently read (listened to) American Prison: A Reporter's Undercover Journey Into the Business of Punishment, which The New York Times Book Review ranked as one of the "10 Best Books of 2018."

Though I've been studying our criminal "justice" system for years, I was nevertheless shocked at what the author saw when he went undercover for four months as a prison guard at the Winn Correctional Center in rural Louisiana, which is run by a multibillion-dollar private prison company, CoreCivic (CXW) – formerly the Corrections Corporation of America. This book review, The Dickensian Conditions of Life in a For-Profit Lockup, does a good job of capturing the horrifying story. Excerpt:

Every management decision at Winn, Bauer discovers, is dictated by one imperative: maintaining profitability by squeezing expenses. This begins with the low pay, which leads to staffing shortages dire enough to threaten the safety of both guards and inmates. But the crisis at Winn goes much deeper. During his four-month tenure, Bauer documents a dozen stabbings; scores of "use of force" incidents (far more than at comparable state-run units); cell doors that can be opened by inmates; atrocious medical care; and a seemingly preventable inmate suicide. He records guards shamelessly admitting that they trained bloodhounds by using actual inmates, beat inmates outside the view of cameras and routinely failed to perform the most basic elements of their jobs...

4) Speaking of incarceration, you'll probably be surprised to learn that I was once jailed – albeit only for a few hours. It's a wild story...

I was in Zimbabwe in early 1992 as part of a four-month adventure traveling throughout southern and eastern Africa before I started Harvard Business School in the fall. Through a friend of a friend, I was doing a report for the Zimbabwe Department of National Parks and Wildlife on the tourist industry in the Lake Kariba area.

Like a total idiot, I accidentally overstayed my tourist visa by a week. When I realized this, I went to the local immigration office, thinking it was no big deal and that they would quickly renew my visa...

To make a long story short, they arrested me and locked me up in the local jail, where I shared a cell with a smooth-talking Zambian car smuggler. I was going to have to spend three days there, as the judge only came to this small town twice a week, but fortunately my friend got me released while awaiting my hearing (where I was sentenced to 30 days in jail... or a $1 fine!).

To read the full, crazy story, here is the six-page letter I wrote at the time to my then-girlfriend (and now wife of 25-plus years).