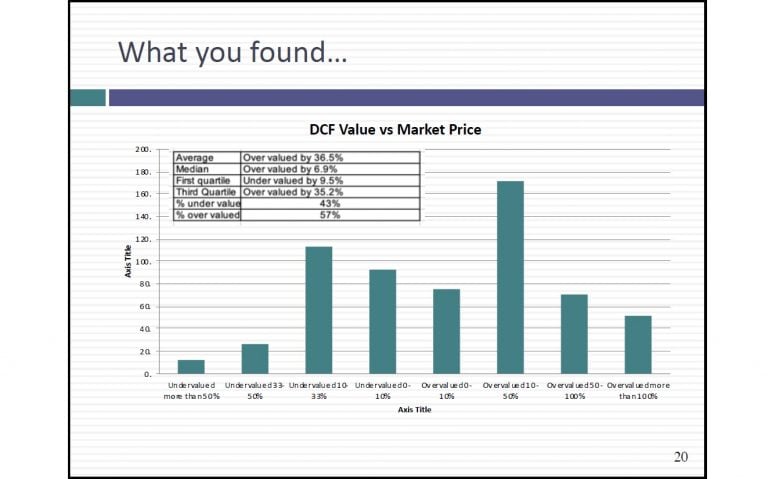 Using Dante’s inferno as my model, I started by looking at valuation sins and then moved on to using the numbers that were turned in on individual company valuations to review the class.

So what I'd like to do in this class is actually spend some time doing a very quick review of the class so let's see where we started the class. I said there were three ways you could put a number in a company right. Intrinsic Valuation. Well you make estimates of Cash Flows growth and risk and try to value a company pricing where you try to see what other people are paying for similar companies adjust for differences and in some very special cases we attach a premium to our values because there was an option an option to expand an option to abandon option to delay patents and develop reserves. But there are only three ways.

Everything you do will have to fall in that you say what about liquidation valuation. What about liquidation valuation. To do liquidation valuation you've got to value the assets on your balance sheet. How are you going to value them either with an intrinsic value or pricing so liquidation valuation sum of the parts valuation are different ways of doing valuation that different different applications to these three. And if you step back and think about what it is that drives intrinsic value. I know there are lots of details but you start with the cash flows and those cash flows are going to be a function of how much you put back into the company. It's after tax corporate income minus net cap ex minus change in working capital and how much you put back will be a function of what the quality of your investments is and what you generate. The value of your growth depends on on a host of know what you compared to big band the constraints you put on growth and your competitive advantage will determine how long you can keep this going before you become a mature and your discount rate is the only place in a DCF where you can show your risk either through your bait and your cost of equity or as a spread new cost of debt. You just kind of back you get a value for the operating assets. Don't forget to mop up cash you subtract our debt with cross holdings you bring them anywhere minority interest you subtract them out you come up with a value of equity.

So I'm going to do a review of this class using a very strange structure you required to read Dante's inferno at NYU. You don't I mean this is actually I mean I read the Cliff's Notes version. I have time for the real book it's too depressing. Don Davis is deeply damaged Italian from the Middle Ages. Put all kinds of Catholic guilt and the way we've dealt with it. He created layers of hell for different kinds of sin. The whole book has hundreds and hundreds of pages describing in excruciating detail what each layer of heaven. The bottom line was each layer gets harder than the previous one and the bigger your sin the deeper the layers you go into. Someone who used that structure to talk about valuation sins will start tonight. Getting get a little warm but not really hot. And then we moved down as you get to deeper and deeper layers of valuation since I'm going to put you in deeper and deeper layers of valuation. So at each one I'm going to use as a way of reviewing the class. It's going to take the form of I'm going to give you multiple choice questions. You don't need a calculator but this would be a way in which we can review the class using these layers of sin as a structure. So let's start with what I call the base your fixation. 2009 these are real numbers. I sat down to value Exxon Mobil. I treat it as a mature oil company which makes sense one of the largest oil companies in the world. There's not high growth I estimated the free cash flows to the firm from the previous year. And I think I did the mechanics right. I took the after tax operating income I subtracted on net cap exchange in working capital I came up with free cash flow to the firm of fifty four billion dollars in 2008 I estimate the cost cap reflects on mobile of 8 percent which is not unreasonable.

Pretty close to the median cost cap and for mature company and I put a 2 percent growth rate reflecting inflation in perpetuity. I've got fifty four billion dollar free cash flow to the firm and 8 percent cost of capital a 2 percent growth rate in perpetuity to mature firm so I ask you to value the operating assets for X on mobile. Lead me through what you're going to get. What's in your numerator free cash flow to the firm. Forget about the one policy it's gonna be so small you don't have to worry about. 54 billion divided by R minus G. Which would be point 0 8 minus point or two fifty four divided by point 0 6 is about nine hundred billion dollars if our valuations are right this is either the most undervalued stock in the history of time because you got nine hundred billions in value. The stock is trading at 373 billion. And even if you do cash and debt and all the neat stuff. This is either a massively undervalued stock or I've screwed up. On my valuation. And odds are I've screwed up on my valuation so I usually three numbers free cash for the firm cost of capital growth rates if I've screwed up it's got to be in one of those three numbers right. So what do you think the culprit is. Nothing you're putting up your hand already what do you think the culprit is. What did I do wrong.