Chinese vendor Vivo has been launching a new smartphone every few weeks. The company has introduced a new Vivo Z3x in its home country. The Z3x is an upgrade to last year’s Vivo Z1. It is nearly identical to the Z1, barring some new features. The device will be competing with Xiaomi’s blockbuster Redmi Note 7 Pro, one of the best phones in the mid-range segment. Here we compare the new Vivo Z3x with Redmi Note 7 Pro in terms of specs, camera, and pricing to help you decide which one is a better buy.

The Z3x has the same overall design as the Z1. It has a traditional notch at the top of the screen to accommodate the selfie camera and the ear speaker, and a chin at the bottom. It’s unclear why Vivo chose to use the old-fashioned notch instead of the waterdrop or dot notch. Its rear panel is made out of plastic. The phone gets a vertically aligned dual camera setup and a fingerprint sensor on the back.

The Redmi Note 7 Pro measures 159.2 x 75.2 x 8.1 mm and weighs 186g. Unlike the Z3x, its rear panel is made out of glass, which gives it a more premium feel. The rear glass is protected by Corning’s Gorilla Glass 5. It is available in Nebula Red, Neptune Blue, and Space Black colors. It retains the 3.5mm headphone jack.

On the back panel, it gets a dual camera setup and a circular fingerprint reader for authentication and security. On the front, it has a tiny dot notch at the top and a chin at the bottom. The Note 7 Pro marks a departure from Xiaomi’s metal unibody design.

The Redmi Note 7 Pro sports a similarly sized 6.3-inch IPS LCD screen with 1080 x 2340 resolution. It has a 409ppi pixel density, 19.5:9 aspect ratio, and an 81.4% screen-to-body ratio. The display is protected by Corning’s Gorilla Glass 5. Xiaomi says it has used the best quality LCD panel on the Note 7 Pro. Though it’s not as good as OLED screens, it offers vibrant colors.

The Vivo Z3x supports dual SIM functionality, as does the Redmi Note 7 Pro. Under the hood, the Z3x runs Qualcomm’s mid-range Snapdragon 660 processor paired with Adreno 512 graphics processor. It packs 4GB RAM and 64GB of internal storage. There is also a microSD card slot that allows you to expand the memory by up to 256GB.

Vivo has added a 3,260mAh battery that you can charge via a micro-USB port. It runs Vivo’s custom Funtouch OS 9 skin on top of Android 9 Pie. The device is powerful enough to play casual games. To enhance the gaming experience, Vivo has provided features like Game Turbo and System Turbo that allocate processing power where they are needed the most.

The Xiaomi Redmi Note 7 Pro runs a slightly more powerful Qualcomm Snapdragon 675 with Adreno 612 graphics processor. In China, Xiaomi has launched the device in only one configuration of 6GB RAM with 128GB internal storage. The Redmi Note 7 Pro comes in two different configurations in India: one with 4GB RAM and 64GB storage, and another with 6GB RAM and 128GB storage.

The Note 7 Pro also gets a microSD card slot with support for up to 256GB external memory. It runs Android 9 Pie with Xiaomi’s custom MIUI 10 skin on top. The device packs a giant 4,000mAh battery with 18W fast charging support. The battery is large enough to last a full day of normal-to-heavy usage. It uses USB-C port for charging.

The Vivo Z3x features a dual camera setup on the back. It consists of a 13-megapixel primary lens with f/2.2 aperture and a 2-megapixel depth sensor with f/2.4 aperture. On the front, it has a 16-megapixel selfie camera with f/2.0 aperture. Vivo has provided several modes such as Portrait, Beauty, AR, and Dynamic Photo. The Z3x uses AI to detect up to 22 scenes and 240 scene combinations to optimize them.

The Redmi Note 7 Pro features a 48-megapixel primary lens with an f/1.8 aperture and a 5-megapixel depth sensor with f/2.4 aperture on the back. The rear camera setup offers dual-LED flash, autofocus, HDR support, and panorama mode. It has a 13-megapixel selfie camera with AI baked into it.

Vivo has started taking reservations for its phone via its online store in its home country. The Z3x would go on sale in China on 8th May. The company hasn’t yet provided details on international availability. The Z3x has been priced at CNY 1,198 ($180) in China for the lone variant with 4GB RAM and 64GB  storage. The price is lower than its predecessor Vivo Z1, which was priced at CNY 1,798. 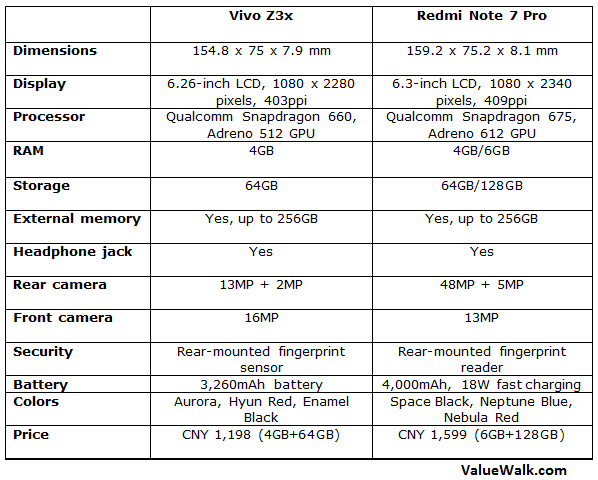