ValueWalk
Home Videos Thoughts On Pricing And Asset Based Valuation 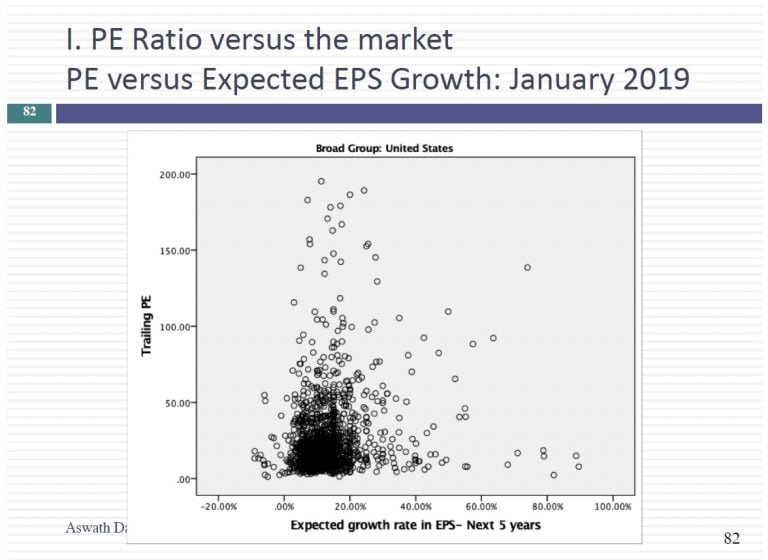 In this session, Aswath Damodaran provides his closing thoughts on pricing and asset based valuation.

Session 20: Closing Thoughts On Pricing And Asset Based Valuation

Let's start today's session by talking a little bit of pricing. I want to show you something very exciting. I have a slider that I point to that actually works now. For eight weeks I've been putting this off that old point I had. There was nothing coming out of it I kept pointing and clicking nothing came out of it. I have a point to that works which is going to make a huge difference in my teaching because without the pointer I was kind of lost. So pretty point post point that you can do the comparison. Let's do I started the class Destler. So today we're going to wrap up prices. And we're going to come up with a variety of multiples so we will look at price earnings ratio is priced above. And if you look at it I'm going to start with the page. When you look at equity research sometimes you have a dozen multiples pray that you sprayed is the right word because you know you really can't make sense of them without price. So you can estimate 10 12 15 different multiples for a company and you can price the company with each one.

So. Let's suppose. You take your company skates off to a software company and you apply a bunch of different multiples to price a company with all give you the same pricing. Now price earnings can give you one price to book and give you a second one. You remember your project already required to do. Give me a recommendation. By yourself which means. Much as you like to now pass this off. You got to decide. So I'm going to give you some choices and what you can do with these different pricing and the different numbers. The first is. Take an average across all of the different multiples. You could do that. You could take the multiple that most other analysts use in the sector and you could take the multiple that best capture what investors are pricing acetone off college pricing game you gotta to tell me how you're going to make seem you know come up empty and you can take the multiple that best incorporates the fundamentals of intrinsic valuation.

Which you think is the best solution. Part of you says it's intrinsic value. We've been talking about it. You remember this is a pricing game. If I get a chance I'm going to show you how I price Twitter in 2013 at the time of the IPO. Price it and revenues operating income growth rates margins even all those things were. I précis Price stood on the number of users that had. You know why. Because I look across social media companies are publicly traded in 2013 and I look to see which variable best explain differences in pricing across companies. Using how do you come up with that. I just did a correlation between IIED revenues EBITDA etc. And pricing and the variables that best explain differences in pricing across social media companies was how many users you have that is using that is so irrational. Your job in pricing you went to you took me down this road remember I wanted to stay with intrinsic valuation. You said let's let the market and. You decide to do that you've got to trust the market in this. Yeah. Actually here is the multiple that best captures. The pricing differences which means if you have a multiple and a bunch of variables here here's what you should do do a correlation matrix and see which variables are best explained pricing. And if it's the weight of the CEO.

Maybe companies with fat CEOs have higher price earnings ratios just go down that route right. You're saying that makes no sense. That's what's pushing a price. Fire and seal and replace them with a fat seal. And see if it actually makes a difference. Pricing is a very pragmatic exercise. It's not what you think and what I think. Incidentally you know devaluation of the week this week is going to be. It's going to be Uber. I just posted my overvaluation and pricing yesterday. I want to focus a little bit of the how do you think priced Uber. I priced it based on left. You know how I'm going to price left. Based on Uber. I'm going to price over based on left. This is going to be the self referencing game which means what. So I'm hoping and praying does not happen between now. And their IPO. If Lyft has too many days like last Thursday when remember they dropped 10 percent. Uber suck. So I read this conspiracy story about how people in Uber were trying to talk lift down and I said that makes no sense because if you're Uber you have more than anybody else vested in how well Liff does. You're going to talk them up you're not going to talk them down. So it's a pricing game. But here's what I won't do tomorrow I'm going to post Uber valuation. It's already on my blog I'm going to post it. I'm going to trade could create the same google shed's spreadsheet. I've always done. I wanted to actually try do a valuation. Incidentally I took a different twist and value Uber rather than valuing it with revenues. I did that the top down like I did left. But I also value to Uber rider.