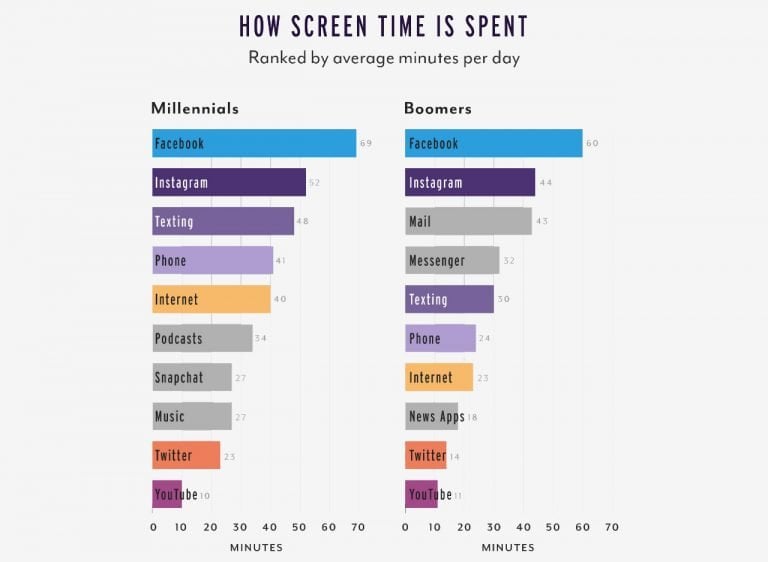 Most Americans believe smartphone screen time addiction is a real problem, and with 90-percent of people sleeping with their devices within arm’s reach, there may be some truth to it. But while many Americans assume that millennials are the ones constantly glued to their devices, a new study revealed there’s greater similarities between generations than we realize.

But do people realize how much time they spend starting at their screens?

One-in-three survey respondents said the expected their total screen time to be less than it was, according to the study results. However, knowing just how much time they spend on their devices doesn’t seem to faze many. Roughly two-thirds of respondents said they won’t cut back on phone usage, even knowing what the realities of it are. Are smartphones the addiction of the future?

The majority of people (roughly 60-percent) say their smartphone is their primary internet device over laptop and desktop computers. These tiny, pocket computers travel with us everywhere—from work and public transit, to our bedrooms and public spaces—and with more applications coming out every day to distract, entertain, and consumer our attention, there’s likely no end in sight to smartphone screen time's popularity. Some companies are coming out with ways to draw attention to user phone use, like Apple’s notifications on whether its users are using more or less screen time than they have in previous weeks, but this study reveals that knowledge doesn’t necessarily empower people to change their habits. In 2019 people are addicted to their smartphones, but they don’t seem that worried about it.