Late last year it looked like the public pension funds crisis was getting a little bit less bad, in the sense that funding levels had improved a bit. However, the extreme market volatility experienced in the last three months of 2018 may have undone most of the improvements, and any further volatility this year threatens to wipe out the rest.

In fact, public pension funds appear to be their own worst enemies because the harder they try to rack up gains against their massive amounts of unfunded liabilities, the harder it’s becoming for them to make any progress. Essentially, volatility begets more volatility, which erases the high returns they desperately need.

Moody's Investors Service Analyst Thomas Aaron warned in a recent note that the late-2018 stock market losses will likely result in bigger-than-expected public pension funds cost increases for many governments in 2021. He also warned that unless investment returns change course, the market losses for the 2018-2019 fiscal year could undo most of the recent improvements in funding levels.

Moody's estimates that governments which release June 30 annual pension funding snapshots recorded losses for the first half of fiscal 2019. The firm also found that governments with Dec. 31 pension reports probably recorded negative returns for 2018. Aaron warns that if the first half of this year brings additional declines, some governments could see investment losses amounting to one-quarter of their revenues or even more.

Incidentally, Moody's uses that 25% figure in its pension "asset shock" indicator, which suggests many governments in the U.S. could see an asset shock in their pensions this year. 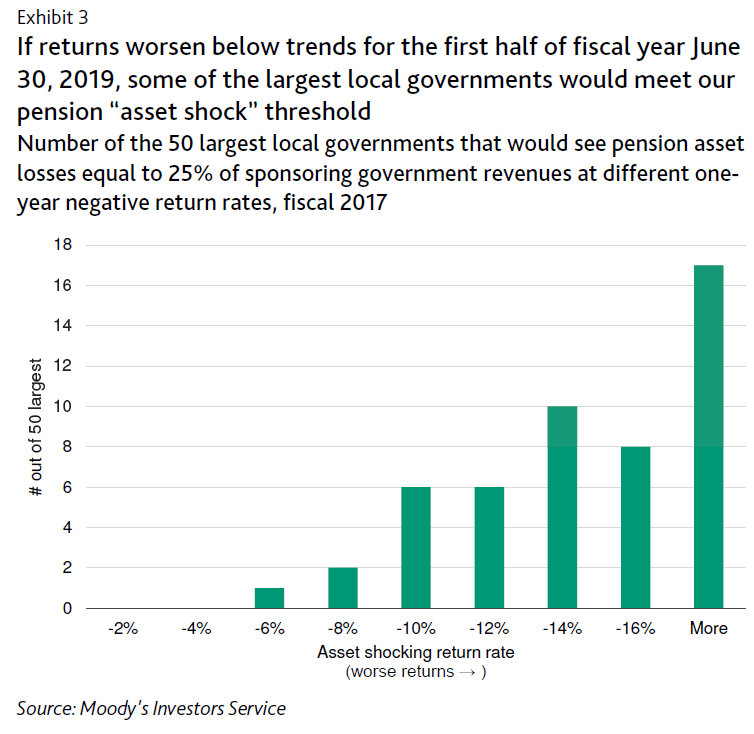 He also said that even though public pension funds in the U.S. generally take a long-term view in their investments, the recent losses in the equity market "highlight the uphill credit challenge facing governments that rely on high-return/high-risk pension assets to cover a large portion of their pension benefit promises."

The Moody's report appears to point out something very similar to what we read from Canaccord Genuity last week. Canaccord blamed pensions for the ongoing string of boom and bust cycles in recent years. The firm's analyst warned that unless lawmakers do something to reign in public pension funds, these cycles could get stronger and stronger until the next financial crisis hit.

Moody's approaches this issue from a slightly different angle but came up with a similar viewpoint. Aaron explained that public pension funds' "heavy investments" in equity and alternative assets have resulted in volatile returns. He also clarified that public pension funds usually have annual investment return targets of 7% or more, which is why they generally feel the need to maintain such "large allocations in asset classes that carry high expected volatility."

He also said that for this year, Moody's investment volatility expectations for portfolios seeking high returns along the lines of what most public pension funds seek are a little lower than last year but still "elevated." 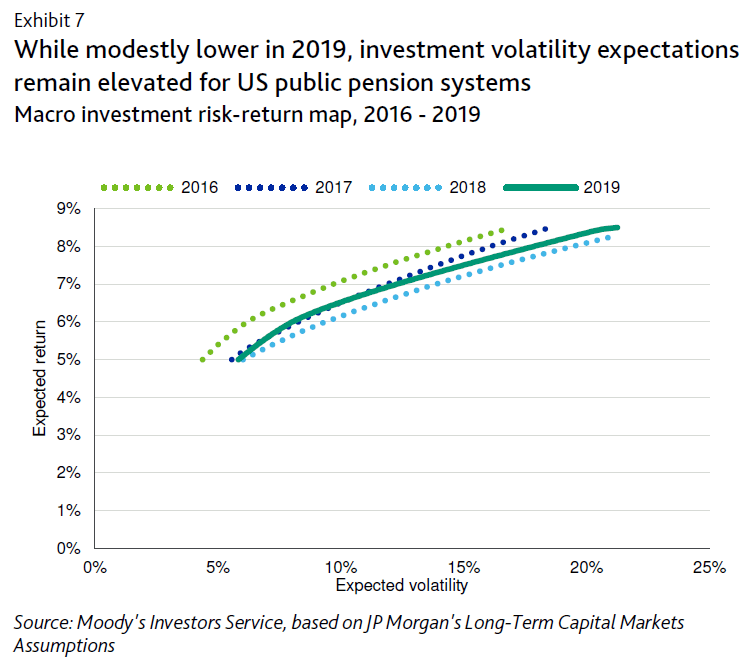 He warned that if the first six months of this year bring significant investment losses for public pensions again, then some "very poorly funded" public pension systems could see their assets depleted.

"Systems with significantly negative non-investment cash flow (NICF) relative to plan assets and rapidly growing benefit payments will be most exposed to depletion risk without offsetting increases in contributions from governments and/or employees," he emphasized.

He also warned that some governments could soon find their unfunded pension liabilities to be "unaffordable" this year if the markets end up delivering "another round of significant investment losses."

Aaron pointed out that pension costs have gone up a lot over the last 10 years, but despite the increases, most governments have been able to delay serious damage to their budgets and cash reserves, thanks to strong revenue growth and deferring public pension funds contributions'. However, he warned that the extreme volatility could steepen the cost growth trends even further. If that happens at the same time a recession hits, then some governments could face "a severe affordability challenge," he said.