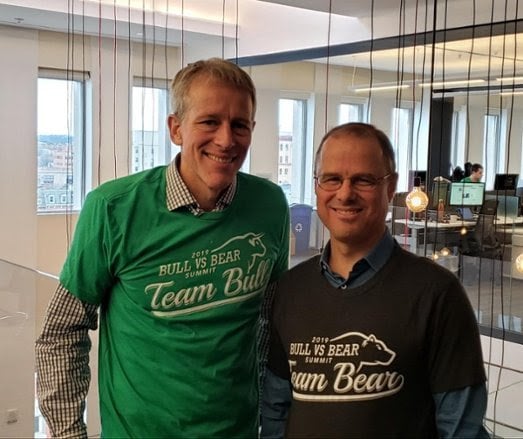 1) A final reminder that the 2019 Bull vs. Bear Summit, a free webinar Glenn and I are in, airs in just a few hours at 8pm ET (you can sign up here). I did a three-minute video interview about it earlier today, which you can watch here, and here’s a picture of me with the host of the summit, Dr. Richard Smith, the founder and CEO of TradeSmith (we’re wearing Summit t-shirts):

2) One of the things I enjoy most about these emails is the feedback I get from my readers – I learn so much! Here’s the first of three examples, in response to my blasting of Plus500 in yesterday’s email:

Plus500 is not even the worst of the bunch. NOT EVEN CLOSE! For example, Plus500 has a license and discloses it (as per regulations on their website), but some companies lack disclosure, front run or delay client orders for own profit, or tamper with the software which creates fake "noise" to stop out clients. Or how about IronFX, which wouldn't let people withdraw their money. It should have been closed down, but only got fined (probably due to political connections).

There are all sorts of FX/casino companies and pseudo asset managers that are just hiding Russian money and assets in funds that are basically owned by one family. Essentially funds are taking the place of holding companies due to fewer reporting requirements.

The regulators in many countries are understaffed, underfunded, probably politically influenced and staffed by mostly by people who’ve never worked in the industry.

3) Another reader, Brendan S., responded to my email two days ago in which I discussed the lessons I’ve learned about letting winners run while also managing risk and cutting losers:

I really enjoyed this email. I've been reflecting on something similar and wanted to share.

A bit about me: I'm a dyed-in-the-wool value guy, from the church of Graham, Dodd, Buffett and Munger. My ideal investment philosophy is to simply buy and hold forever the stocks of great companies, with Outsider managers, high ROIC and reinvestment rates, and a good valuation.

[My note: He’s referring to the classic book by William Thorndike, which Buffett himself recommends, The Outsiders: Eight Unconventional CEOs and Their Radically Rational Blueprint for Success.]

However, I recently interviewed at a firm with a thoughtful portfolio manager who came more from the Druckenmiller school of thought. His approach is to manage downside volatility and risk while hitting home runs when possible. His criticism of my approach is that by totally ignoring downside volatility and medium-term performance, value managers end up losing their investors before value can be fully realized. I think he's right.

This feedback has forced me to look to momentum and volatility-based techniques to manage risk. Risk, in this sense, is not business risk, but the risk of downside volatility that most investors simply cannot endure.

I believe the buy-and-hold-forever approach is the ideal way to invest, as it reduces the number of decision points, and is focused purely on the company and its development over time. I also believe that there is virtue in being long-term oriented and sticking with great people, companies and ideas through thick and thin. However, the practical problem with this approach is that most of the investment universe, and most investment capital, is simply not set up that way.

As a result, I think professional investment managers have two choices (realistically speaking): embrace more short-term risk management philosophies that incorporate techniques from outside the value investing orthodoxy, or find truly proprietary, long-term capital. The long-term, volatility-agnostic value approach really only works if it is aligned with its capital base, which has to either be proprietary or the 1% of investors that invest this way. Otherwise, if an investment manager wants to be in the game (in the ring?), she or he would probably do well to embrace some short-term risk controls that draw from momentum/volatility strategies to preserve capital during downturns.

Keep in mind that from my view this doesn't change the process of fundamental value analysis. One still does all the normal in-depth research work, but buy or sell when value and momentum lenses line up.

Anyway, I am still thinking through all of this and considering how to implement it.

Munger talks about the importance of destroying a closely held belief every year, so perhaps a rigid buy-and-hold-forever strategy will be mine for this year. I'd welcome your thoughts and feedback on the idea.

Thank you for sharing your great newsletters! I've enjoyed them for years now.

4) Lastly, a fund manager in Edinburgh didn’t agree with my email last Friday in which I lamented the idiocy of Brexit and predicted that it likely wouldn’t happen:

I don’t think your comments on Brexit are particularly fair! Personally, I voted to Leave the EU but I am not a hardliner – I may have voted differently had I known what a cock up they would make of it!! However, nothing gets my back up more than someone explaining to me that I was hoodwinked and didn’t know what I voted for.

Briefly, I would state that Trump/Brexit are symptoms of popular dissatisfaction rather than causes of it. If you look at polls in Europe then the share of votes/seats for Far Left/Right parties has tripled in the last decade. If Italy dared to have its own referendum, it too would probably vote to leave. The EU was a grand idea but in its current construct it is a half-way house. The choice in 2016 was not between Stay or Leave but actually between More Europe or No Europe. France in particular is wedded to the idea of further integration – one government, one army, one budget etc.

That said, he agrees with my assessment that Brexit is unlikely to happen, noting that “betting markets here have it as 73% chance of No Brexit,” though he thinks the odds are more like “50% no Brexit, 20% hard, 30% negotiated.”

In times of political turmoil, events can move from impossible to inevitable without even passing through improbable. In early 2016, the idea of Britain leaving the European Union seemed almost as absurd as the next American president being the six-time bankrupt and serial sex pest Donald Trump. A few months later, Brexit and the Trump presidency were universally acknowledged as the inevitable consequence of an anti-elitist, anti-globalization backlash that was predictable decades ago.

This sense of inevitability, far more than genuine anti-European conviction, is what has discouraged Britain from changing its mind about a pointless and self-destructive policy that few voters cared about until 2016. The message from post-Brexit polling and focus groups has been: “We all know that Brexit has to happen, so why don’t the politicians just get on with it?”

But with the Brexit process now moving toward its climax, another outcome is moving from impossible to inevitable: Britain could soon change its mind and decide to stay in the EU. This reversal of fortune could begin next month, when Prime Minister Theresa May is expected to lose the decisive parliamentary vote on her Brexit deal.