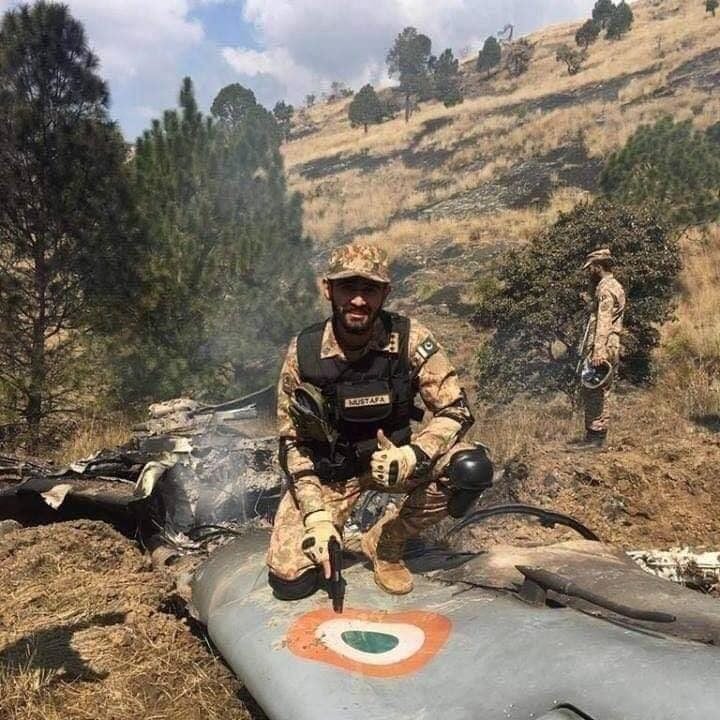 This week the Indian Air Force (IAF) violated the Line of Control (LoC) with Pakistan and proceeded to drop bombs in Pakistan territory. According to Indian military forces ‘dropped bombs on a terrorist camp in Pakistan,’ in response to the February 14th attack by the terrorist organization Jaish-e-Mohammad (JeM). Pakistan has denied Indian reports that the bombing raid struck terrorist camps on their side of the LoC, with evidence appearing to show Indian media broadcasting footage of a 2017 bombing.

Earlier today, Pakistan has claimed to have struck back against IAF jets who again violated the LoC, Indian officials have yet to officially respond to the incident as of the writing of this report, however, pictures of the downed warplanes began appearing on social media — among reports of Pakistan capturing an IAF pilot. Some outlets are reporting Pakistan captured the other pilot, ValueWalk is unable to confirm those reports at this time or independently verify the images are of downed IAF warplanes. Yet, video exists of a pilot claiming to be of the IAF.

In response to PAF strikes this morning as released by MoFA, IAF crossed LOC. PAF shot down two Indian aircrafts inside Pakistani airspace. One of the aircraft fell inside AJ&K while other fell inside IOK. One Indian pilot arrested by troops on ground while two in the area.

A press conference with Ghafoor was published approximately an hour after the preceding tweet.

“Pakistan is not pushing the environment towards war. If that was the case, we could’ve engaged military targets, or caused human casualties today. We deliberately avoided escalation. We just wanted to show our capacity to strike,” Ghafoor stated during the press conference for the media in Pakistan. “We locked, engaged and struck in a wide, open space, kept a safe distance. This was not retaliation in the true sense. We just wanted to show our capability,” he continued.

At a Tuesday press conference Pakistan Foreign Minister Shah Mahmood Qureshi, Finance Minister Asad Umar and Defence Minister Pervez Khattak held a joint press conference where Qureshi would state “We will act, not react” and “do not underestimate them [the PAF] and their ability and capability to defend Pakistan,” while urging that Pakistan was working toward de-escalation. Whether or not the Minister was foreshadowing his belief that the IAF would again violate the LoC, is unknown.

China who has an economic interest in the region due to the mega China-Pakistan Economic Corridor (CPEC) deal asked both countries to use ‘restraint’ prior to the incident on Wednesday.

Prime Minister of Pakistan, Imran Khan would also speak about the event on Wednesday, “It is not in the interest of Pakistan that its soil should be used for exporting terror. Similarly, Pakistani soil cannot be subjected to terror,” Wajahat Saeed Khan, a multimedia journalist in Pakistan summarized the event at the beginning of a tweet series quoting the Prime Minister.

Two Indian MiGs who entered Pakistani airspace today after our retaliation were shot down. But where do we go from here? – @ImranKhanPTI #PakistanStrikesBack

All wars have started due to miscalculation. World War 1, World War 2, Vietnam, the War Against Terror – @ImranKhanPTI #PakistanStrikesBack

Can we afford a miscalculation? Have we accounted for where we will go from here. That's why, I again invite India for dialogue – on terror, or any other issue. Better sense should prevail – @ImranKhanPTI #PakistanStrikesBack

We should sit down and talk about differences – – @ImranKhanPTI #PakistanStrikesBack

At some point, India will make an official response regarding the two downed jets and their origin. If they do indeed belong to the IAF, the captured pilot(s) could be used as a bargaining chip by Pakistan in exchange for their release. Even such a situation would not guarantee further escalation between the two countries as hostilities and ill will seems to be mounting as the days go by.

However, China and Saudi Arabia could play a role in helping prevent a war from breaking out. Both countries are heavily invested in CPEC and do not want a war in the region to put the deal in jeopardy. The larger international community could help prevent war, but it could turn into various countries picking sides rather than playing a role in finding a solution which doesn’t turn into a humanitarian crisis.

If Pakistan honestly does not wish to ‘react’ to recent events in an offensive manner the situation may come to a close without much further conflict. Although, if the IAF continues to violate the LoC — Pakistan may decide to drop their defensive stance and move to escalate the situation.