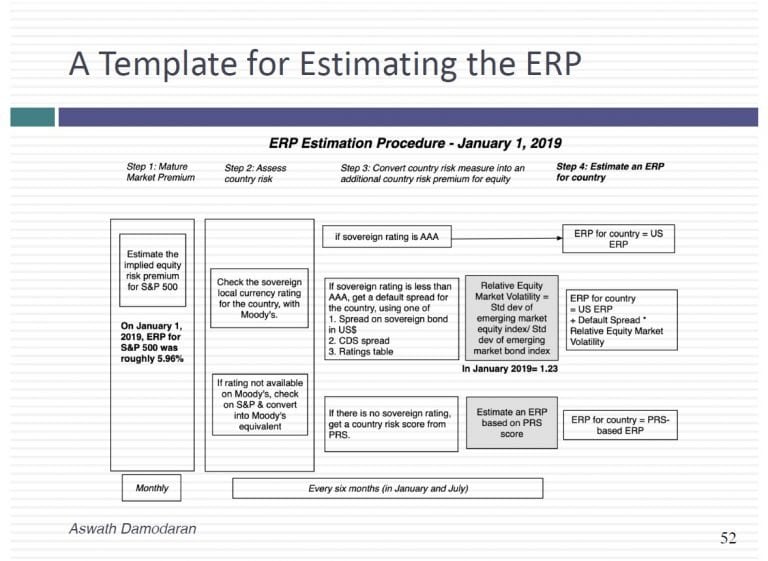 In this session, we started by doing a brief test on risk premiums. After a brief foray into lambda, a more composite way of measuring country risk, we spent the rest of the session talking about the dynamics of implied equity risk premiums and what makes them go up, down or stay unchanged. We then moved to cross market comparisons, first by comparing the ERP to bond default spreads, then bringing in real estate risk premiums and then extending the concept to comparing ERPs across countries. Finally, I made the argument that you should not stray too far from the current implied premium, when valuing individual companies, because doing so will make your end valuation a function of what you think about the market and the company. If you have strong views on the market being over valued or under valued, it is best to separate it from your company valuation. I am attaching the excel spreadsheet that I used to compute the implied ERP at the start of February 2019. Play with it when you get a chance.

So I start with the question or is it insulting at this point. I want to start with just one question. I'm going to assume that everyone is in a group so I'm not going to ask that question. If you're not and you're too ashamed to admit to it see me after class or tell me in private. Or put it up somewhere so people can find you. But how many of you have not picked a company yet. You know what I'm going to say next. Right. Pick a company let's get moving because we are now in the process of actually dealing with numbers. So I'm going to start this morning session of this afternoon session. I'm completely lost what time of the day it is. With a question to see if the risk free rate discussion we had last week stuck to Dr. abiders creates. We talked about risk in different currencies. Let's say that you are looking at a Swiss multinational if you hate abstractions called Nestle if you want which gets revenues from all over the world let's assume that it gets 10 percent of its revenues in Switzerland. 30 percent of its revenues Miyu 40 percent theU.S. 20 percent in India. And let's suppose I gave you rescreen rates in each of those currencies. The Indian rupee the euro the dollar the Swiss franc and Severi declared the facts right. So here is my question when I'm valuing this company what should I use this matter is created and I go through the choices and if this is the choice you would like. You don't have to put up behind hand Italy's acknowledges. A simple average of the four numbers. You saying I'm an MBA I don't take simple averages and this is why we have to have something. How about a weighted average that sounds more sophisticated right.

Come on. Some of you are saying that sounds like the right answer. I let it flow for the moment if you think that's right. So it can make. Maybe I should use a Swiss franc rate. After all it's a Swiss company. And why not just stick with the local currency the lowest of the rates which might end up being the Swiss franc rate as well. But the lowest rates the highest rates. Why because you want to be conservative.

The one that saw none of the above was actually the right answer. Or you can use any of these currency. You can tell your Nestle and Rupee's you can value them Swiss francs you can rally in U.S. dollars. The answer is you pick the currency. You do the valuation that currency. There is a way in which if you want to stay with local currencies you can do it you know what you'd have to do you'd have devalued Nestle India and rupees and use the rupee rescreen and you could actually value each part of the world. The reason and we'll come back and talk about why this is so difficult to do it's not because we don't know how to do it but the information is often not broken down at a regional level well enough for you to be able to do so when you value a multinational. You have no choice you could say why kind of use a weighted average of their credit. Why the analogy I gave yesterday over the last question about Fahrenheit and Celsius right. Basically you take temperatures in Fahrenheit and Tepper's and tells the average amount you get junk you gain weight in pounds and weight in kilograms you add them up. You get junk currencies of measurement mechanisms icon mix and match. So you can never take simple averages you can't. It's amazing how much confusion this concept creates and valuations how many times I see valuations of people of use weighted averages or average risk created. You cannot do that. That is not a choice. Let's keep moving. We talked about historical risk premiums last session remember we looked at data and we came and lot of people still are stuck on historical risk. So let's assume you decide to go down that route with all the perils that come with that backward looking noisey. So my question is an estimation question when I want to estimate historical risk assuming that's what I want to do. Should I just take the last year after all it is the most updated the most current number I can.

Give you pause or if I just took the last year and I computed the historical risk premium for the US for the last year 2008. What do of screaming look like was last year a good deal for Stockler Abadir. It's actually a pretty bad year because the last quarter demolished stocks last year returns on stocks as it was minus four point something percent return and rebounders minus point. It's the first time since 1968 but stocks and bonds had a negative year. But stocks traded far worse than bonds to the risk premium for last year would have been minus four point something percent. Now imagine doing a valuation he said that's minder's scream for the future that's going to be strange because you're saying the discrete rate is 2 per cent I would have minus 2 percent and stocks.