ValueWalk
Home Economics Kevin Hassett: Do Not Read Too Much Into The Yield Curve... 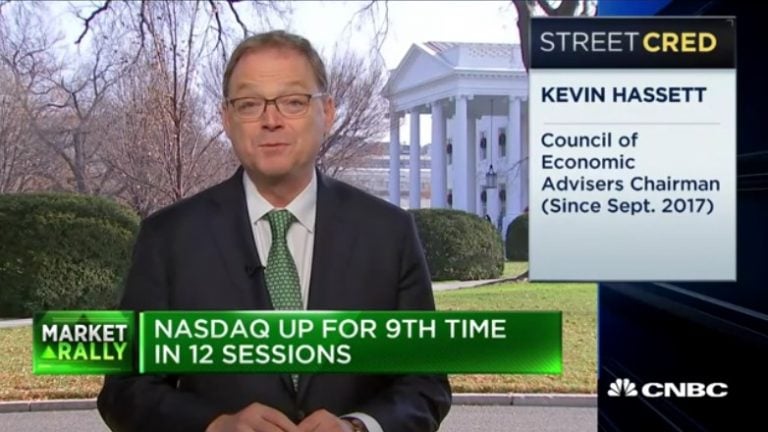 SARA EISEN: Excellent points from Jay Powell. Let’s head over to Atlanta where those comments happened. And our Steve Liesman is going to be speaking with the Council of Economic Advisers Chair, Kevin Hassett. Steve, over to you.

STEVE LIESMAN: Yeah, Thanks, Sara. Do you have about 40 minutes here? Well we’re going to try to get this all done in eight. Kevin, thanks for joining us.

STEVE LIESMAN: So you had said in the last day or so that there were many companies like Apple that could be hurt because of these trade tensions. But Larry Kudlow, the Director of the National Economic Council, came out and said there aren’t that many companies. So are you and Larry on different pages here?

KEVIN HASSETT: No, not at all. But the fact is this could happen in an interview, that there was sort of a second half of a sentence which I really should have added when I responded to the question, “Is Apple the only company that’s effected by this slowdown in China?” The answer is, no, there are a heck of a lot of companies are affected. But you have to remember to put it in context that the Chinese share of U.S. profits is only about 1.7%. And so even if Chinese profits went to 0 which no one expects they’re going to do that, it would be possible next year we would be revising up earnings estimates because GDP growth is so strong.

STEVE LIESMAN: Broadly though, do you see trade tensions? Because you have an aggressive 3% — that’s my word, aggressive – 3% GDP forecast for the U.S. this year, which is high relative to the street. Seven tenths, maybe a full percentage point. Do you see these trade tensions detracting from growth this year?

KEVIN HASSETT: Well I think that the strong growth we had this year basically happened while the trade tensions were rising, right, like the tariffs were being put in place and so on. And I think that looking ahead to this year what we expect is that we’re going to as we have with the new NAFTA or USMCA with Korea, conversations with Europe, with the Chinese, that we’re going to move forward and actually reduce tensions throughout the year. And so I think that because the uncertainty about our trade process was a negative and we still grew 3% it should make you, Steve, more confident that we’ll have 3% this year.

STEVE LIESMAN: Well, I welcome your optimism, Mr. Hassett. But I think markets also seem to be inclined to believe the worst here. If that does not happen, would you think that would subtract from growth?

KEVIN HASSETT: If we don’t make positive progress in reducing uncertainly about trade it would subtract from growth, yes.

STEVE LIESMAN: Let me talk about another thing where I think the market and the administration are in different pages here. It comes to capital investment. And I know you gave a very lofty speech here with words like “endogeneity” and “ex ante” in your slides — we are not going to do that here. What you talked about is there has been in some of data a decline in business investment that has made some skeptical. Two things: one is that we are not getting the capital investment and the second one is that this year we are not going to see the better growth that we got from the tax cuts last year in either earnings or the economy.

KEVIN HASSETT: Right. I think the way to think about it is suppose that what you’re doing every year is you’re just buying enough new machines if you’re running a plant to replace wear and tear, right? Well then the plant isn’t really growing, right? And so that was pretty much the world that we are in when President Trump was elected that in the aggregate that there was actually more depreciation than there was buying machines. And so our productive capacity was actually flat to slightly down. But suppose you go from doing that to you know, buying a whole new plant this year. Then now all of sudden we have two and we have a lot more output, right. Suppose you buy another plant next year. Well at that point since we bought a plant this year then you would say, “Oh, investment is flat,” but we’re adding a whole new plant, so you would have three plants, if you bought one, next year. Because investment is the thing that makes investment grow. And so what should happen after a tax reform is investment should jump up and then it should grow back at trend from that higher level. And so you know, we expected forever and ever investment would go up about 10% this year and then kind of return to trend and while it is doing that, productive capacity will continue to grow over the next decade. And so the presentation I just made here at these meetings showed to a whole bunch of wonky economists a bunch of slides that showed that the investment spike that we predicted almost exactly at the scale we predicted.

STEVE LIESMAN: But if you take a step back and you look at what the market seems to be forecasting here, which is somewhere — maybe it is a recession or somewhere just north of a recession, is the market missing this story about the continuing benefits of the tax cuts this year?

KEVIN HASSETT: Yeah, I don’t — the markets are a very smart thing. And there’s a lot of stuff going on with markets for sure. So, you know, it could be that our story for why the market did something is completely wrong. Because in the Milton Freeman school, the market is very smart. But the fact is when you look at the core data, the GDP in the fourth quarter, you know, our internal models have it just about a 3. We’ve just had about the strongest jobs report we’ve had in the last couple years, you know, with the big upper divisions to previous months. We are heading into next year with a massive amount of momentum and tax cuts which basically, as per my presentation which you can find at the CEA website if you’re watching and would like to see it, that just showed that tax cuts worked just the way they said they would. And so think about it this way: last year you and I talked about it, I can remember, about my outlook for this year. And I said 3.1. And you were like, ‘Oh, that’s way above consensus. Doesn’t make any sense.’ And then now, it looks like almost exactly we’re going to get 3.1, depending on what happens to the fourth quarter. And so the model that said 3.1 this year say we’re going to be about that next year, too. And now we’ve got one whole year where we’re correct. And so why would I revise downward after, you know, giving you this controversial forecast that turned out to be correct? So I should actually be more confident–

STEVE LIESMAN: I like that. More on your side now, Kevin, but I have a question for you. In your experience with the data, do we stop on a dime? In other words can you go from 3 to below 2 or below – I mean, my experience is that it doesn’t happen that way. Is that there’s a – there are slopes to these things and that you don’t go from 300,000 to negative job growth or from 300,000 to 100,000. So do you think the market is overdoing it here in terms of its pessimism?

KEVIN HASSETT: There is a big literature on this. And one of the things that has been shown to be a useful indicator that definitely got some problem – or caused some problems with markets is the yield curve. When the yield curve inverts, then that is usually a sign that there’s a recession coming. But right now I think the yield curve is a difficult signal to read because the backend of the curve is still being impacted by quantitative easing and so on. So for me I think that the only indicator that has ever worked in the past is in some sense a little bit obscured by global quantitative easing. And so I think that if a recession comes I’m not sure the yield curve is going to signal in the way it has the past.

STEVE LIESMAN: Kevin, this is the second interview we’ve had to do. The markets been up on both days. You did not know that before you came on so I look forward to continuing the conversation with you.

KEVIN HASSETT: Thanks a lot, Steve.

STEVE LIESMAN: Kevin Hassett. Sara, Mike, back to you.