Since the prominence of the automobile, we all rely on cars as a major mode of transportation. They’re a fast and convenient way to get to our destination, but despite its uses, cars are also known to have several disadvantages as well. 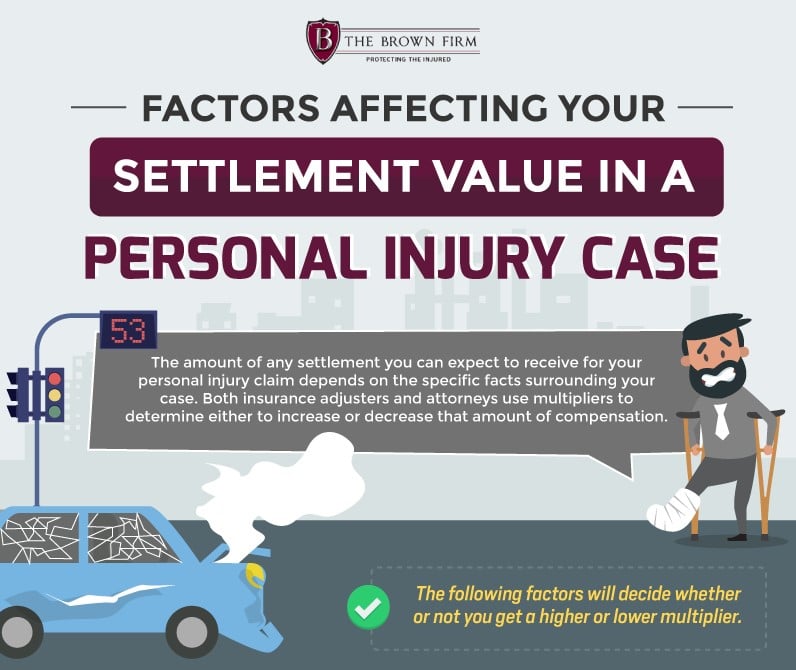 Besides its contribution to air pollution and cost, cars are known to be a dangerous way to travel, and despite the safety advancements such as seat belts and airbags and drivers taking safety precautions, car accidents still happen on a daily basis. Accidents related to automobiles result to nearly 40,000 people dying each year in car crashes according to the Fatality Analysis Reporting System Encyclopedia.

While not all accidents result in death, the majority of them does lead to injuries, traumas, property damage and tons of bills. When the injuries you receive are caused by another party’s negligence, you are entitled to receive compensation, but most of the time, negotiation with the insurance company along with an extensive investigation of your claims would be involved.

To have the best chance at adequate compensation, you need to know the type of settlement you can get for your claim. Every case is different, and while there’s no magic formula, there are certain factors that can be used to estimate the value of your claim. Some of the most critical considerations are the seriousness of the sustained injuries, the cause of the injury, and its impact on your daily life.

But to succeed all claims must meet specific requirements. For your injuries, the ones you sustained from the motor vehicle accident must have resulted in either severe and permanent impairment of physical function and disfigurement or death.

In general, the more severe the nature of personal injuries, the higher the chance for the victim to receive higher compensation because of the pain and suffering they have to experience.

But personal injuries aren’t the only consequences of being involved in a car accident. Victims involved in these accidents often suffer from emotional and mental trauma as well, and they can be compensated for it too. It’s natural for anxiety, sadness, or stress to manifests after such a traumatic event, but it can be a problem when it starts to disrupt their everyday lives.

Some might develop a fear of stepping in a car after the accident which can be a problem when they have to get back in the car eventually. According to some research, around nine percent of automobile accidents, victims even developed Post Traumatic Stress Disorder (PTSD) afterward.

As to the pain and suffering it costs you, you should also consider the manner in which your injuries have disrupted your life and how it will affect your livelihood and future.

Both the personal injuries and emotional trauma would lead to the interruption in their capacity to earn a living. Severe injuries can cause the loss of your physical ability to work, not just on the day of your accident, but in the future as well since you wouldn’t be able to do your job while recovering though when you include it in your settlement claim it’s possible to recover the income you lost and will lose.

But you can’t just claim these losses and call it a day. Without any evidence to support your claims, you wouldn’t be able to convince the other party that you have a strong case. When you get an insufficient settlement offer, the documentation would explain why it’s unacceptable.

Personal injuries with physical signs are easier to prove. All you need is to provide medical records of the treatment you received along with the test results and testimony from your doctor. Additionally, you can include receipts from other medical expenses such as medicine.

Emotional distress such as fear and anxiety can be more challenging to prove as it can be met by skepticism. However, it’s still possible in a similar way with proving your personal injuries, but it can only be confirmed when victims seek treatment to licensed mental health professionals.

The evidence would be even stronger with photos of your injuries or statements from friends and family members regarding your experiences.

While you want to receive a settlement for as soon as possible, there is no way to determine the certain the amount of time it will take. In addition to the injuries and mental damage, other elements are considered such as whether the other person is at fault and the proof and evidence that must be gathered.

Additionally, rushing could also lead to mistakes that you could regret later on. One of the biggest mistake people often make is that they rush to settle a case before knowing the full extent of their injuries, only to find out that they need a costly surgery later on. It would be better to file in a settlement once your medical situation is determined to be certain that all costs will be covered.

These factors can influence the value of your personal injuries settlement offer so you should never expect to receive a particular amount in your settlement offer. There’s also the possibility that the insurance companies will try to minimize the amount they have to pay out of your claim.

For all the pain and suffering victims experience after these accidents, it’s only right that they receive the full extent of compensation they deserve. While you can rely on your personal injury attorney for legal advice, it’s still important to at least have some knowledge regarding the factors that could affect your case.

In this infographic by The Brown Firm, learn about the multipliers insurance adjusters, and personal injury attorneys use to increase or decrease the amount of compensation you’ll receive.