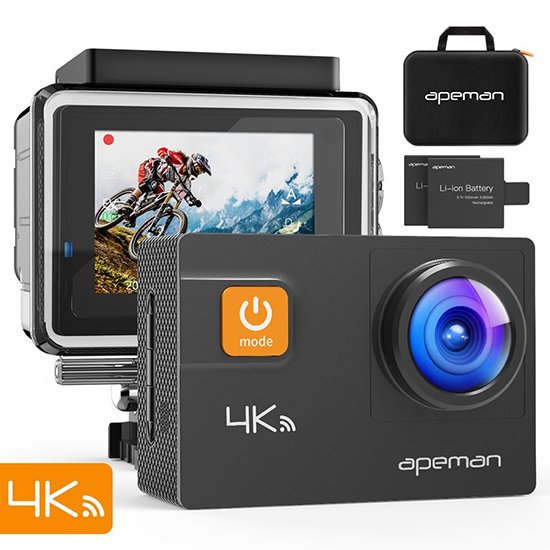 Have you ever wished you could afford one of those little sports camcorders, but just didn’t think it was in your budget or a necessity? Well, let me introduce you to one that is affordable, functional and does most everything that the big-name brands can do. It’s the Apeman A80 Action camera. It is a 4K 20MP WIFI Ultra HD waterproof 40M sports camcorder with a 170° EIS Sony Sensor.

I decided to try out this Apeman A80 Action camera partly because of the fact that it has a waterproof case which is great for where I live in Washington state where it rains 8 months of the year, and for use at the beach too, as it is unavoidable to keep sand out of a regular camera, often ruining it. Another reason is the action capabilities of the Apeman A80 Action camera. I am normally just a point and shoot person, and that’s what this is for me, simple but unique.

The Apeman A80 Action camera arrived in a well-labelled box. Inside was a convenient carrying case which enclosed all parts of the camera and accessories in neat little soft foam pockets for each accessory to keep it from falling all together and getting lenses scratched or jumbled. It also included two batteries, which is essential for me. I hate running out of battery and nothing to replace it with! End of fun videoing!

There was an instruction manual, which I read all the way through, as it actually wasn’t long and drawn out but was simple and quick to read and had diagrams of how to put each of the accessories together.

The accessories consisted of adapters to hook the camera up to a backpack, bicycle, tripod (tripod not included), and 2 other sticky mounts which could be used for a dashcam or wherever you might want to put it. There were also 2 extra sticky pads in case you wanted to move a mount to a different location.

The camera itself is very small, 2x3x2 inches in size. Very lightweight, and I wondered if it was really going to take good pictures as well as be able to take good action shots.

There was no SD card provided, so I needed to go out and purchase one to actually try out the camera to see the quality of pictures it would take. A Class 10 Micro SD card, maximum support 64 GB, was needed.

There is no battery charger, although could be purchased, but there was a cord so that the battery could be charged from a computer or power plug.

There is the option to connect to your smart phone, but that isn’t what I normally would bother doing so I didn’t try out that option for myself.

The camera can be used in three different ways: alone; with the waterproof case; or the vented door (or dust cover) case. When using the waterproof case, it has a safety lock so that it doesn’t accidentally pop open. To change from the waterproof cover to the vented door, it is an easy quick snap exchange of the rear door. The part in front of the lens is easy to clean, which was good, as it seemed pretty easy to get it smudged with my fingers since it is such a small camera.

I felt that the quality of photos was very good, but could become a little hazy where there was a glare from the sun. Images were not grainy, but had nice color and tone. If the picture was too close up though, the outer edges were more significantly curved with a slight fisheye effect, but I think that is to be expected with a small action camera such as this type.

I experimented with videos with just the camera, next with the protective dust cover, and then with the waterproof cover.

The camera has gyro stabilization and anti-shake features. When I attached it to my bike, there was very minimal or no bouncing of the images while riding along.

Using the video without the case, you can clearly hear all audio in the surrounding area. Using the vented door case, which vents to the back with two slits, audio from the front of the camera was somewhat muffled, but audio from behind the camera was somewhat clear. The totally enclosed waterproof cover makes it so that almost virtually no surrounding audio is heard, except for when you bump or scrape the cover.

I did not try it at the beach, and I am not sure if I would use the dust over or the waterproof cover. I suppose it would depend on if I were to let the kids play with it, in which case I would put the waterproof cover on it – too much risk of sand or saltwater getting in and ruining the camera.

You can order this great little Apeman A80 Action camera and camcorder for $69.99 on the Apeman website.

All in all, I wouldn’t call this a “top-of the line” camera, but more like an economical version, but perfectly suitable for everyday occasions such as swimming, action videos, videos of your kids playing, etc.

Full disclosure: I received a free Apeman A80 Action camera in return for an honest review of the product.